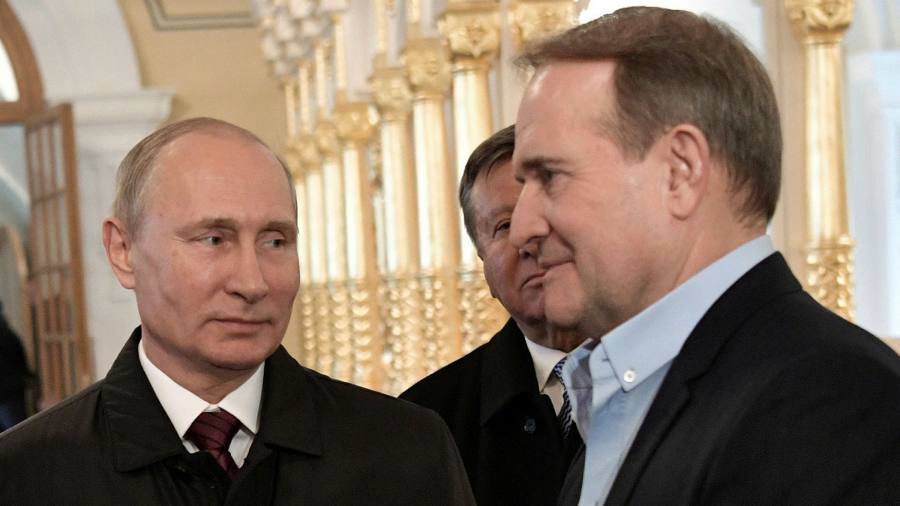 Announcing the measures imposed by presidential decree late Friday, Ukraine’s national security chief Oleksiy Danilov said Medvedchuk and seven other sanctioned individuals, including his wife Oksana Marchenko, as well as 19 companies affiliated with the group, were suspected. for “terrorist financing” against the Ukrainian State.

“Sanctions are imposed on assets belonging to Mr Medvedchuk,” Danilov said. The property controlled by him and other accomplices, which included five Russian nationals, would be seized, Danilov added.

The sanctions threaten to escalate tensions between Kiev and Moscow, which have been high since Russia’s invasion of Crimea in 2014 and its subsequent role in a seven-year separatist war in Ukraine’s eastern Donbas region.

Ivan Bakanov, head of Ukraine’s SBU state security service, said the sanctions were imposed based on intelligence that individuals and companies were involved in smuggling coal from Russian-backed separatist-controlled eastern regions. The ongoing investigation will “confirm the financing of terrorism,” he said.

The TV channels – 112, NewsOne and ZIK – are legally owned by businessman Taras Kozak, another pro-Russian member of the Ukrainian parliament and an associate of Medvedchuk. The government imposed sanctions on Kozak himself earlier this month.

Zelensky’s decision to remove channels from the Ukrainian waves for allegedly spreading pro-Russian “misinformation” was sharply criticized by the Kremlin. But Western countries refrained from commenting, with the US embassy in Kyiv saying in a statement this month only that “the US supports Ukraine’s efforts … to counter Russia’s malignant influence.”

Medvedchuk has described the closure as an act of censorship aimed at reversing Zelensky’s poll estimates.

Cossack wife Natalia Lavrenyuk was among those sanctioned on Friday. Together with Medvedchuk’s wife, she owns several businesses in Ukraine and Russia.

Medvedchuk made no immediate comment. He serves as MP and leader of the Ukrainian pro-Russian party Opposition Platform – For Life. Putin is the godfather of one of his daughters.

Sanctions are not expected to directly stop his political activities, although confiscation of assets may limit his influence.

The assets to be seized by Medvedchuk include an oil pipeline in western Ukraine and aircraft controlled by companies linked to the oligarch and his associates, Danilov said.

According to Danilov, the sanctions come amid what he described as an explosion in fighting in eastern Ukraine, which has claimed the lives of 13 Ukrainian soldiers so far this year.

Kyiv and its Western supporters say the Kremlin has fueled and is fomenting war in the Donbas region, which has claimed more than 13,000 lives since the 2014 blast.