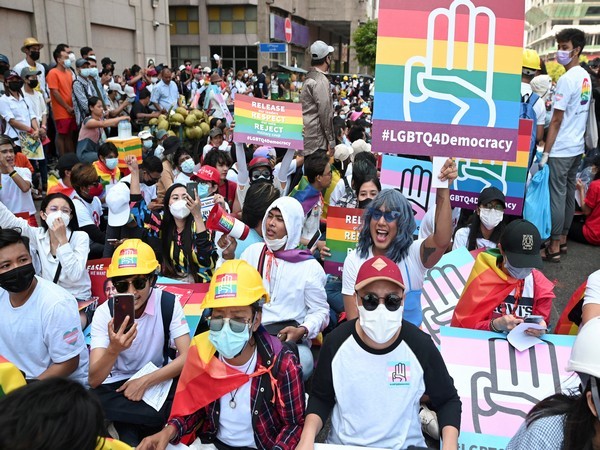 Naypyitaw [Myanmar], February 20 (ANI): Myanmar’s ethnic groups and LGBTQs took to the streets on Saturday to protest against the military junta for overthrowing the democratically elected government.
According to a report by Al Jazeera, members of the LGBTQ community are among the most prominent participants in the ongoing protests against the coup leaders, expressing their opposition in creative ways, using costumes.
“There are some people who do not like the NLD (National League for Democracy) but we are not talking about the NLD,” said Salai Mon Boi, a youth leader from the Chin minority.
He further informed that Saturday’s protest, which took place on Chin National Day, focused on four demands: the abolition of the Constitution, the end of the dictatorship, a federal system, and the release of all leaders, Al Jazeera said.
On Friday, a woman died after being shot in the head last week during an anti-coup protest in the Myanmar capital.
Mya Thweh Thweh Khine, who was 20, is the first known victim of pro-democracy protests that have continued since the military took power on February 1st.
Her death prompted calls for an investigation into the use of force by army security forces.
Since the shooting, Mya Thweh Thweh Khine has become a symbol of the protests, which have intensified over the past two weeks. Illustrations of her image were seen on signs and banners as protesters called on the military to return power to civilian control and to release ousted leader Aung San Suu Kyi and other elected officials, CNN reported.
Moreover, public anger over the coup has intensified in recent days, with hundreds of thousands of people taking to the streets in towns, cities and villages across the country.
The coup is doomed globally; The UK and Canada had imposed sanctions on three generals from the Myanmar junta.
The United States has sanctioned 10 individuals and three entities for associating with the military apparatus responsible for the coup in Myanmar.
Myanmar has been under a state of emergency for a year after the commander-in-chief of the armed forces, Min Aung Hlaing, took power over allegations of voter fraud in the November 2020 election. This poll gave civilian leader Suu Kyi NLD a victory extraordinary and a second term in power. (ANI)

Responsibility: The views expressed in the above article are those of the authors and do not necessarily represent or reflect the views of this publishing house. Unless otherwise noted, the author is writing in his / her personal capacity. They are not intended and should not be construed as representing the official ideas, attitudes or policies of any agency or institution.

Virginia Tech’s board was able to raise tuition fees by up to 2.9% after a two-year freeze | State and Regional News