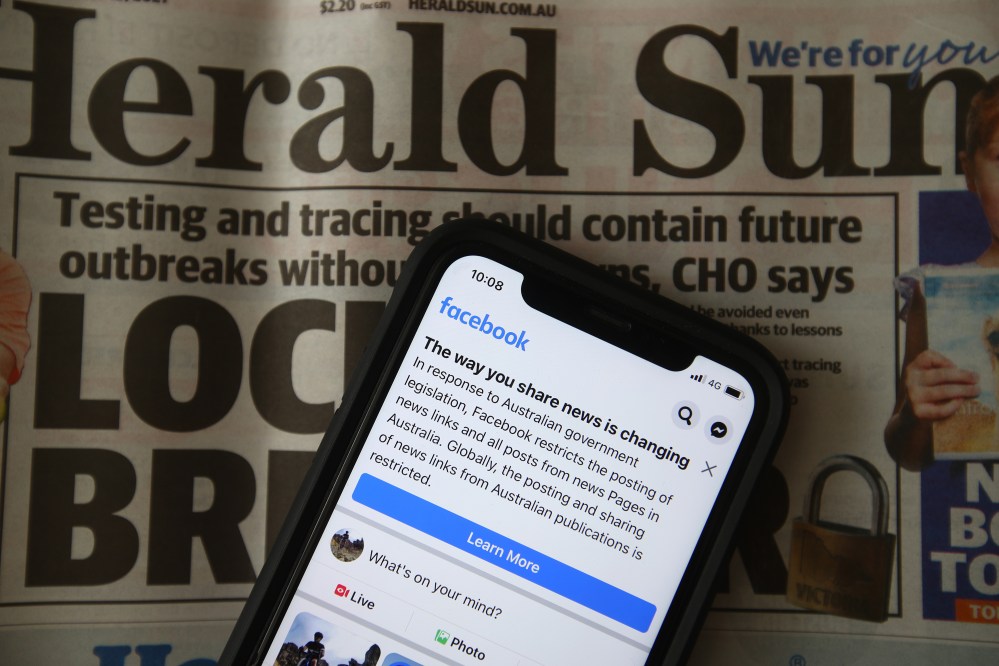 Australia decided to set a price on the news this week and Facebook shocked the country by refusing to buy a deal. The Australian House of Representatives passed a new media law Wednesday that will force Facebook and Google (and only Facebook and Google) to pay the Australian media for the privilege of linking to their news. Google is still terms that speak. Facebook decided to pull the plug and will no longer allow Australian users to post news.

I’m with Facebook on this. If Australians do not want to pay for news about their country, it is hardly the responsibility of foreign companies to pay the bills for them. Government rhetoric about Australia’s new media negotiation code has consistently suggested that US tech companies are reporting Australian news without paying for her. The reality is that platforms like Facebook and Google only show free games that publishers use to drive traffic to their sites.

The Australian government has in fact given an award to publishers. Just instead of publishers paying Facebook to link to their content, the law requires Facebook to pay publishers. Facebook, of course, does not want to pay to host what are essentially ads for Australian newspapers and broadcasters. Facebook itself carries paid ads, but does not place ads directly on the news snippets that people post on its site. It’s the news publishers who mainly benefit from encouraging people to share links on Facebook. This is why publishers are so desperate to get you to share their news.

The massive decline of newspapers (and, to a lesser extent, of television broadcasting) advertising revenue since the turn of the millennium is clearly linked to the growth of the internet, and Google and Facebook do dominate online advertising. It is true that social networks have been the biggest winners of the internet age, while most (though not all) newspapers have been among the losers. But there have been many other losers. Newspapers are not the only companies that have failed to adapt to the new online world. The logic that Facebook and Google should subsidize news is no better than the logic that they should subsidize all internet traffic losers.

There is a fundamental difference between news and all other commodities: We need serious news coverage to support meaningful democracies. like Washington Post says at the top of it, Democracy dies in the dark. And in Australia, the government subsidizes the young man in the mind of one billion dollars a year for state broadcasters ABC and SBS. It also effectively subsidizes commercial broadcasters by allowing them to broadcast free in exchange for providing programs of public interest such as news. What it does not do is subsidize newspapers.

Nor would newspapers be the sole beneficiaries of the negotiating code for new media in Australia. It also applies to commercial broadcasters, online-only outfits, and even to both state-owned media providers. While newspapers in distress have been children posters about the war in Australia at Big Tech, many of these other media outlets are doing quite well. And if television sees problems on the horizon, the challenge is not to reduce advertising revenue, but to increase broadcast services based on another industry that the Australian government is prone to adjust.

Surprisingly, there is almost unanimity among Australian media and commentators that Australian Prime Minister Scott Morrison is eligible to take over Big Tech. It is populism over steroids. The notion that the media negotiation code has to do with the help of Rupert Murdochs’s local property empire Global media empire News Corp., spread in international media, is as old as it is simple. Of course News Corp executives have demanded that Big Tech pay for their pieces, but so have all the other major media in Australia, including state broadcasters. And the misunderstanding that News Corp. dominates Australia’s media landscape is decades old. News Corp newspapers rank second in circulation after those owned by Nine Entertainment (which joined Fairfax Media in 2018), broadcasts only on cable and satellite in Australia and has no presence on local radio.

Reacting to the ban on Facebook blankets in Australian news, Morrison said Australia would not be intimidated by this act of harassment by Big Tech, but the real bully in this debate is a national government that does not want to accept the reality that a foreign firm may simply choose to exit its market rather than pay a tax young. Morrison is now trying to collect one international coalition to force Facebook to pay for the news for four days. He can win. But this time, what undermines democracy is not an irresponsible multinational corporation. Governments is an elected government that sees more votes from foreigners than in taxing its people to pay for the news that is essential to their good governance.

Why Pakistan wants T20 World Cup to be moved from India …