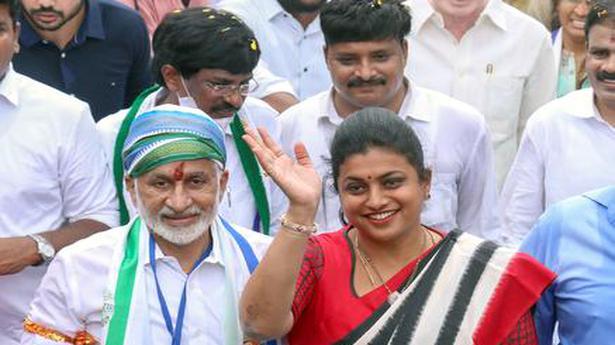 Leading a rally under the banner Visakha Ukku Parirakshana Porata Yatra, here on Saturday, YSR Congress Party MP V. Vijaya Sai Reddy, said the State government and the party will not allow the proposed strategic sale of the Visakhapatnam Steel Plant ( VSP), at any cost.

Over 1,000 YSRCP leaders and workers, union members and other political parties joined the padayatra, which began with the statue of Gandhi near the GVMC office. The Jatra, which covered over 23km, culminated in a public meeting at the steel plant.

Speaking at the public meeting, Mr Vijaya Sai said two things were responsible for the losses at VSP. He said the cost of production was high as the factory had no enslaved mines. He said the VSP had invested about 1,500 crore in the Orissa Minerals Development Company (OMDC) for the captured mines, but the mines have not yet been handed over.

He said YS Prime Minister Jagan Mohan Reddy is aware of the mining issue and is willing to allocate mines in Prakasam district, but they are low-grade mines and they do not meet the requirements of VSPs.

Mr Vijaya Sai said the mines located on the Karnataka-Andhra Pradesh border are under litigation and cannot be separated.

He said that due to the expansion of the plant from 3 to 7.3 million tonnes, the VSP has suffered a debt of about 20,000 crore and it has been paying about 2,700 crore as interest.

If the captured mines are dismantled and the Union government makes a decision to turn the debt into equity, the plant would return to profit in a short time, he said.

Referring to the POSCO management meeting, the Prime Minister, he said during the discussion Mr. Jagan had asked them to leave the VSP and start a steel plant in Kadapa or Krishnapatnam. The prime minister had also promised to provide them with land, Mr Vijaya Sai said.

The MP also urged the VSP management not to reduce production, as this would plunge the company into further losses.

Hinting at management issues, he claimed that senior management is made up of officers from other states and they may not have an affinity for the region, as locals would.

Mr Vijaya Sai said efforts were being made to meet the Prime Minister alongside leaders from other political parties and unions and if appointed, he would raise the issue of debts, enslaved mines and recruit locals to senior management.

He said the VSP was set up after a great deal of human sacrifice and the YSRCP will not allow it to be privatized and the agitation will continue until the Union government revokes its decision.

Tourism Minister Muttamsetti Srinivasa Rao, Visakhapatnam MP, MVV Satyanarayana, MLA Gudivada Amarnath and A. Adeep Raj and others walk along it for 23 km.

The UK economy will suffer 18 billion losses if international travel restrictions are not lifted, the MPs warn.