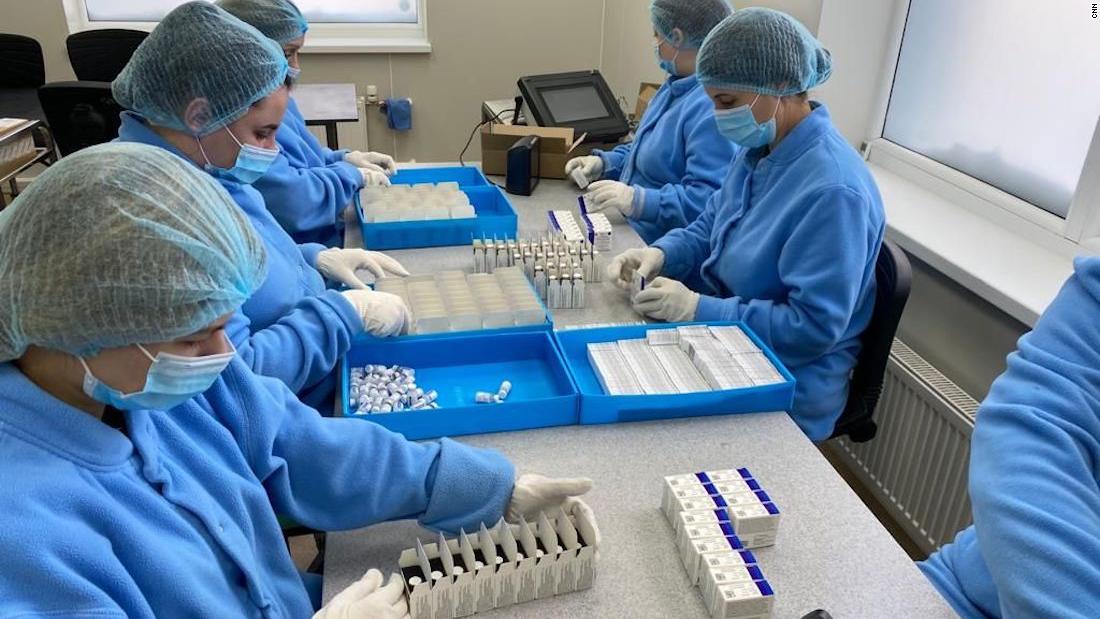 CNN gained exclusive access to the facility, now home to Generium Pharmaceuticals, which has been contracted to increase production of the Russian vaccine against Covid-19, Sputnik V.

The vast high-tech complex is one of seven new manufacturing centers across the country.

Every step in the production process had to be carefully designed and calibrated, including extensive water filtration systems, to mass produce the new vaccine.

“In principle, the production process was known on a small scale, on a laboratory scale, but doing it on a large industrial scale is another universe,” Dmitry Poteryaev, chief science officer at Generium, told CNN.

He said these problems had been overcome a few months ago and the factory was now ready to increase production further.

“Now, we are producing several million doses every month and hope to get an even higher amount, maybe like 10 or 20 million a month,” Poteryaev said.

In cavernous refrigerators, with temperatures even colder than the frozen Russian winter, Sputnik V bottles sit filled in crates, awaiting delivery. Each vial has its own unique QR code, we are told, so it can be traced to individual patients, regardless of where they are in the world.

The vaccine has become one of the most ordered in the world, with at least 30 countries, from Argentina to the Philippines, signing contracts for nearly 2.5 billion doses so far, according to figures from the Russian Direct Investment Fund (RDIF), which is responsible for global vaccine production and distribution.

But the demand among Russians for Sputnik V so far has proven far less enthusiastic.

This is a country with one of the highest numbers of Covid-19 infections in the world – more than 4.1 million cases and counting. But it also has one of the highest levels of vaccine reluctance in the world. A recent opinion poll, published by the independent Levada Center, showed that only 38% of Russians are willing to be vaccinated.

Earlier this month, one of the leading scientists behind the development of the vaccine said that about 2.2 million people – less than 2% of the Russian population – received at least the initial dose of the two-phase regimen.

Sputnik V was the first vaccine against Covid-19 to be approved for use worldwide last August, even before large-scale human trials were completed.
There was widespread early skepticism about Sputnik V, which took its name from the world’s first satellite launched by the Soviet Union in 1957, starting the space race with the United States. Critics say the “Putin vaccine” was created to be another first in a global race to project Kremlin power, no matter how effective or safe it was.
But the results of large-scale human trials, published and reviewed by colleagues in the prestigious medical journal Lancet earlier this month showed an impressive efficacy of 91.6% for the vaccine.

Still, anti-vaccine conspiracy theories are becoming amok online and viewed by millions in Russia, according to monitoring groups. Alexander Arkhipova, a social anthropologist at a state university known as RANEPA, told CNN that many Russians have a cultural tendency to distrust the medical institution, which is seen as an arm of government control, interfering with the private life of people.

Another reason for suspicion may be that while President Vladimir Putin said his daughter had been vaccinated, he has not yet shot her.

The Kremlin has removed questions as to why, saying Putin has planned a vaccine and that when he is finally inoculated, the nation will be informed.

But in a country where many people turn to the Kremlin strongman for his leadership, his abstention on the Sputnik V front is obvious and discouraging.

All adults without basic health conditions in Russia are now entitled to a free vaccination. But progress in Moscow, for example, is slow. In a city of more than 12 million people, less than 600,000 have been vaccinated so far, according to Mayor Sergey Sobyanin.

So the incentive is to increase the numbers.

The state-funded Gamaleya Institute, where the vaccine was developed, was happy to invite the CNN team to get the inoculation, so to speak, from the source.

And across Moscow – the epicenter of the Russian coronavirus pandemic – pop-up clinics are setting up.

Oneshte one in the rich GUM shopping center, a short walk from the snowy Red Square, where Muscovites can read the latest models in expensive boutiques, before appearing upstairs to get Sputnik V. They even get free ice cream with every vanilla inoculation

Staff told CNN they were vaccinating about 200 people every day. There is capacity for hundreds more.

Another clinic has been set up in a fashion food hall, Depot Moscow, to encourage vaccination after a street food lunch or sushi dinner.

For lovers of classical music, there is also an inside Helicon, a prestigious opera house in Moscow, where the strict tones of recorded tenors descend through speakers as people wait for their inoculation.

Some people are getting the message that the vaccine is their best chance of surviving the pandemic.

Vadim Svistunov, 84, and his 86-year-old wife Nonna, went to the opera house for both the initial vaccine and the booster three weeks later.

“We do not want to go up there yet,” Svistunov told CNN as he made gestures in the sky. “We are not in a hurry,” he said.