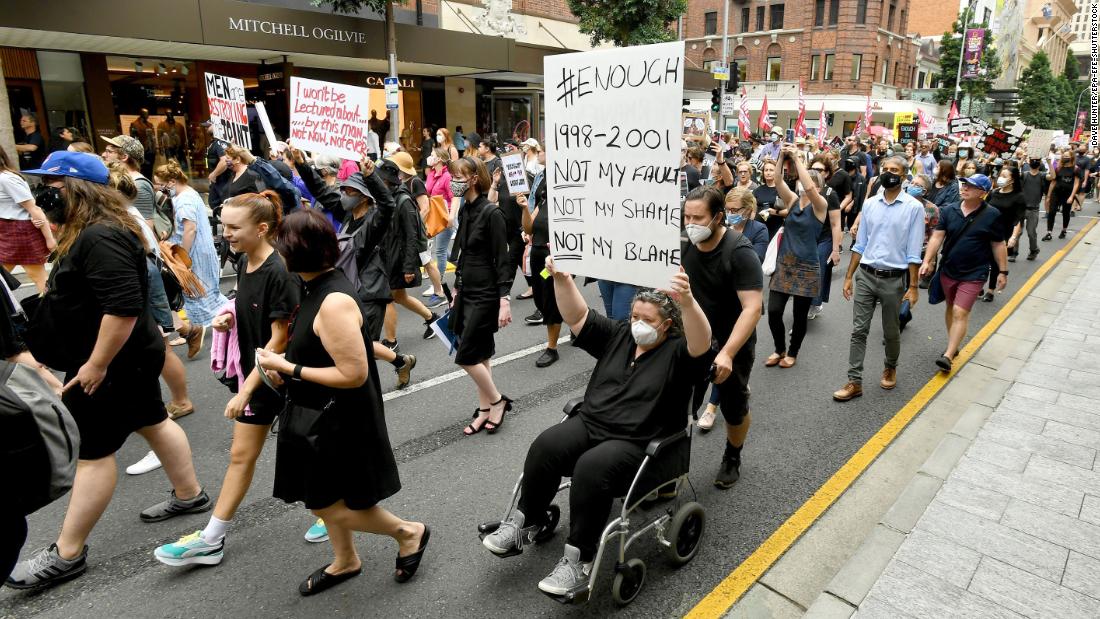 On Thursday, Morrison told a news conference the government plans to amend the Gender Discrimination Act under measures designed to address sexual harassment and discrimination in the workplace. He said he hoped to pass the new laws by the end of June.

Morrison said the sexual harassment was “immoral and disgusting and even criminal”, and “denies Australians, especially women, not only their personal security but their economic security by not being safe at work”.

Changes were recommended in a March 2020 report by Australian Commissioner for Gender Discrimination, Kate Jenkins. It took the government more than a year to announce the changes to the act.
The push to update the law comes with the country’s political culture under scrutiny following a wave of accusations in the last two months of sexual misconduct in Parliament, including allegedly harassment and rape.
In February, a former employee of Morrison’s ruling Liberal Party said she was raped in 2019 by a colleague while inside the House of Parliament in Canberra. Three weeks later, then-Attorney General Christian Porter revealed that he had been charged with raping a woman in the late 1980s, which he vehemently denied.
Morrison was heavily criticized for his response to the allegations. On March 15, thousands of women across Australia marched in protest calling for an end to violence against women and greater protections against sexual crimes

Zali Steggall, an independent federal politician and lawyer, said the proposed changes to the law were a positive step, but she called on the government to make the changes quickly.

“The longer the delay, the longer the behavior is not caught and this is not retrospective legislation, so it should be passed as soon as possible,” she said.

How gaps were created

The Sex Discrimination Act in Australia was passed in 1984.

In a review of the law for the UNSW Legal Journal on its 20th anniversary in 2004, Australian discrimination law expert Beth Gaze described it as “hesitant and rather ambivalent.”

Gaze told CNN that under the Gender Discrimination Act, politicians and judges are not covered as they do not fall into employment areas where legislation prohibits discrimination – leaving them outside the protection of the act

Employees of politicians are covered by special employment legislation, said Gaze, which does not include protection against sexual discrimination.

Legal experts said the loopholes in the law were likely the result of outdated and poorly worded legislation, rather than an attempt to deliberately protect Australian politicians from allegations of sexual harassment.

Federal politician Steggall said the original wording of the 1984 Act had been a cryptographer, trying to establish any kind of workplace where discrimination or harassment can occur, rather than issuing a blanket ban. The wording of the legislation led to confusion and gray areas.

The original law “reflected the time in which it was created,” said Australian Law Council President Dr. Jacoba Brasch, in a statement. “Australian culture and attitudes have moved forward and the SDA needs to be updated to reflect contemporary public expectations,” she said.

Steggall said the gaps were first identified during an Australian Senate inquiry in 2008 but took more than a decade to rectify, through the fault of “all sides of politics for failing to act”.

Morrison said Thursday that he would approve all 55 recommendations made by the commissioner, including a complete ban on sex discrimination in the workplace and a national survey every four years to check progress.

The government-proposed changes to the Law on Gender Discrimination will also make it clearer to employers and employees what gender discrimination is and give complainants more time to file.

But despite Morrison’s June time, Steggall said she had drafted new laws that were ready to be introduced once Parliament resumes in May.

Its legislation would close gaps in the Gender Discrimination and Sexual Harassment Act in all circumstances, she said. The law will also penalize organizations or political parties that assist or support crime.

Brasch said the success of any legislation introduced by the Morrison government will depend on how the new laws are formulated, to clear up any “ambiguities” in the legislation, and to ensure that public servants are “personally responsible” for sexual harassment.

“(This is) the key to ensuring that (the problem) is properly addressed and that problematic behavior does not fall into regulatory loopholes,” she said.

John Oliver is weird, but we come to the same conclusion