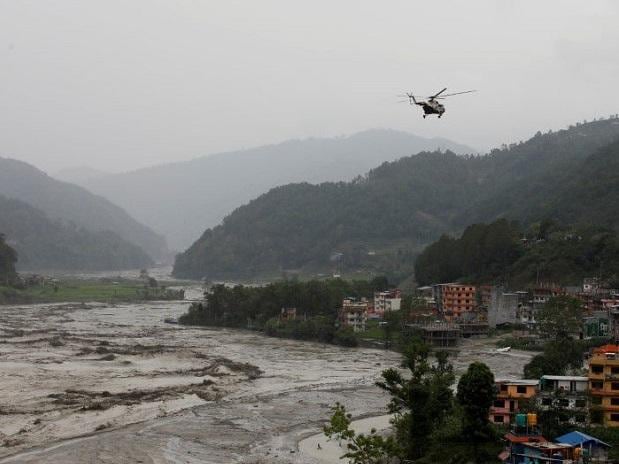 Tuesday’s rapid flood incident in Nepal’s Sindhupalchok district is suspected to have been caused by a glacial eruption in an area bordering Tibet, a government official said.

Speaking to ANI, Rudra Prasad Dulal, the Mayor of the 11th District of Sindhupalchok confirmed that the incident may be the result of a glacial explosion near Tibetan territory which has resulted in the loss of millions of rupees.

“The reason behind this rapid flooding is attributed to heavy rainfall in the upper lying areas. Shocked by the 2072 earthquake (Nepal earthquake date 2015), streams in the interior of the hills are suspected to be covered by large masses of ice and “We suspected that this was a reason for flooding,” said Rudra Prasad Dulal.

He also added that the incessant rainfall and the movement of ice masses under the glaciers going down the hill have been dumped here in the lowlands.

“We are suspecting it to be a glacial explosion,” Dulal stressed.

Some people, who have been displaced due to the floods after losing their homes and properties, are in a state of shock.

The city of Melamchi, once a crowded market and attraction center, now remains mired in a thick layer of mud, sand and water after the flood. According to the official, about 200 houses in the city were partially or completely damaged in the mayhem which started with the onset of the monsoon.

Hundreds of families living in the area are housed in a local school, located a few hundred meters from the main market square.

Radhika Shrestha, one of the displaced due to the flood while recalling the incident said: “I had just returned from my field, then my brother-in-law who lives in” Dhap “(locality in Sindhupalchok) called me and warned me to flee to a safer place where it is said that a river is blocked by flow due to landslide that could explode and flood the city where we live “

“Until I got a warning call, I called my husband who was working in the field, to rush from there. Later we ran to the high extremities without any second thought,” she said.

As the blocked river was descending the hill, it has completely changed the life of Shrestha’s four-member family who have lost all their belongings in the flood forcing them to make a fresh start.

“As the flood took away our land, property and all the basic documents, our family has to survive either by doing work or some other means,” Shrestha said.

Following the mutilation, a total of seven people have been confirmed dead by the district administration and at least eight employees of the Melamchi drinking water project have disappeared.

The Nepalese Army together with the Armed Forces Police and the Nepalese Police are conducting a rescue and search operation in the flood-ravaged area, which has continued to sink under a thick layer of mud and running water.

“We still do not have to think about making a fresh start. All the wealth we gained lies in that house which is now covered in mud and is not accessible. We have nothing now and it is unknown where to we go and how to do go, a complete state of numbness hovers over the mind, “said Laxmi Prasad Shrestha, another flood victim from the area.

Earlier, the Meteorologists of Nepal and other South Asian nations had predicted that the monsoon for 2021 would arrive earlier than last year and that Nepal and some other Asian countries are expected to receive normal to above normal rainfall.

According to the Nepal Meteorological Forecast Division, the monsoon has already hit Nepal since June 1 and will continue for about 3 months.

Almost 80 percent of the annual rainfall in Nepal is received during the monsoon season (June-September). The average annual rainfall is 1,600 mm, but they vary according to the eco-climatic zones (3,345 mm in Pokhara and below 300 mm in the Mustang).

(Only the title and photo of this report may have been reworked by Business Standard staff; the rest of the content is automatically generated by a published syndicate source.)