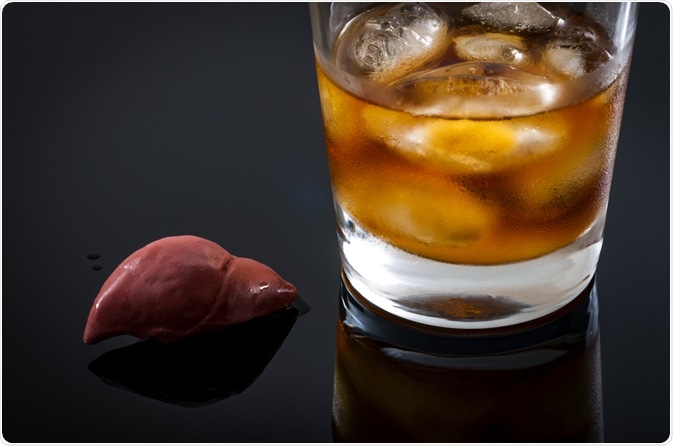 Alcoholic liver disease (ALD) is a general term for damage caused to liver tissue by overdose of alcohol. It includes a variety of illnesses, including steatosis (Fatty liver disease), Cirrhosis, and alcoholic hepatitis (AH). AH is a severe form of ALD that usually progresses to cirrhosis with continued alcohol intake.

AH can regress when you stop drinking, but when cirrhosis occurs, the damage to your liver is irreversible. ALD is the most common reason for liver transplantation in the United States. According to the National Institute on Alcohol Abuse and Alcoholism (NIAAA), AH is defined as:

Clinically, the most common symptom of AH is the presence of jaundice, but other symptoms include loss of appetite, fever, nausea and vomiting, and malaise. Malnutrition is also common in AH patients due to loss of appetite due to ALH.

AH is a preventable disease caused by the continuous consumption of more alcohol than the liver can handle. The liver is a major part of the body for the metabolism of alcohol and has three enzymatic systems involved in the oxidation of alcohol. These include the cytosol alcohol dehydrogenase (ADH) system, the microsomal ethanol oxidizing system (MEOS), and the peroxisome catalase system. The products of all three systems are reactive metabolites called acetaldehyde, which damage liver tissue in a variety of ways.

Therefore, alcohol indirectly damages the liver when it is metabolized. However, it can also directly damage hepatocytes by altering the behavior of other enzymes and transport proteins.

How Much Alcohol Causes AH?

The amount of alcohol required to induce AH is unknown and can vary from individual to individual. Most common in people between the ages of 40 and 60, it has been reported in patients in their 20s and 80s. The estimated minimum daily alcohol intake required for the onset of AH is 20-40 grams per day, but patients typically have a medical history of over 80 grams per day over a 5-year period.

Who is at risk?

Although there is strong evidence suggesting genetic susceptibility to the development of alcohol misuse disorders, the role of genetics in the progression to AH is unclear. Only a small proportion of alcoholics develop AH. However, studies show that the following factors influence the risk of developing the disease:

The presence of obesity greatly increases the likelihood of AH due to the synergistic effect of alcohol and body fat. For example, fatty acids from adipose (adipocyte) tissue contribute to inflammation of the liver, and inflammation of cytokines in adipose tissue is closely associated with inflammation of liver tissue.

In the United States, studies compare the severity of AH and cirrhosis in white and non-white patients. African-American and Hispanic patients with cirrhosis have been shown to be twice as likely to have an AST increase compared to Caucasian patients. Hispanics with AH are more likely to develop cirrhotic features than African-Americans and Caucasians with AH.

Is it possible to prevent AH?

Avoiding all drinking is the only way to eliminate the risk of AH, but you can reduce the risk by reducing your drinking to a moderate amount. Be careful not to consume alcohol with other drugs that may be toxic to the liver, and taking steps to prevent infection with hepatitis C also reduces the chance of developing AH.

Is there anything about living with a chronic illness? : NPR

The CDC recommends that vaccinated people resume wearing masks indoors in some circumstances.