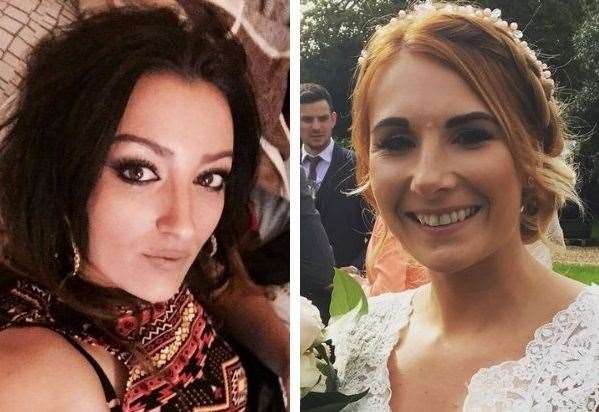 From two moms Kent Studies have shown that people who died of herpes after giving birth may have been infected with the virus by the same surgeon.

Both became seriously ill within the next few days and died tragically on HSV-1. This is a common infection that usually causes pain around the mouth and genitals.

A private laboratory brought in by the trust suspected that the woman had been infected with the virus by “surgical contamination,” but despite requesting East Kent Hospital to provide a cotton swab from the doctor who gave birth to the baby. Nothing was produced.

The families of Kimberly (29) and Samantha (32) were also unaware that the same surgeon and midwife were involved in both Caesarean sections and were said to be unrelated during death. rice field.

Now they want an inquest to be held later BBC journalist reveals details Of the efforts made in a closed room to establish a link between tragedy.

Both women died of HSV-1, but neither had a history of the virus, and tests showed that either was the first to be infected with herpes.

Kimberly Sampson was a “bright and cheerful” barber and mother of her 3-year-old daughter, who lived in her mother’s house on Newton Road in Whitstable.

After a smooth pregnancy, she gave birth on May 3, 2018 at the QEQM Hospital in Margate.

She experienced complications and was finally decided to perform a Caesarean section.

She was discharged with Alby at her request two days later, but felt a lot of pain and could hardly walk.

Her condition worsened in the next few days and was eventually returned to the hospital by ambulance, where she was treated in the obstetrics ward due to antibiotic-induced bacterial sepsis (a potentially fatal condition).

However, her condition continued to worsen, and she underwent a series of surgeries to identify and treat the infection.

Eight days after she was readmitted, a consultant microbiologist suggested trying the antiviral drug acyclovir, which is used to treat herpes infections.

Kimberly was diagnosed with a catastrophic herpes infection only after Kimberly was transferred to King’s College Hospital in London.

She was given just “hours or days” to live and died on May 22nd.

She gave birth four days before the expected date of delivery, and after 17 hours of contraction, some of the blood test results were taken for a caesarean section.

The surgery was performed by the same doctor who gave birth to Kimberly’s baby.

Samantha’s daughter was born healthy, but her new mother was detained for observation because doctors were worried about signs of preeclampsia blood pressure.

These disappeared after 3 days, but Samantha continued to worsen, her abdomen swelled, and her temperature and blood pressure increased.

Like Kimberly, the doctor thought Samantha was suffering from bacterial sepsis, so she was also given antibiotics, but that didn’t work.

When her organs began to close, she was taken to the intensive care unit, where she stayed for four days.

The doctor suggested that she be treated with antivirals, but the microbiology department advised her to continue with antibiotics instead.

The doctor sought help from a hospital in London, and the surgeon took her to the operating room to stabilize her, but she died on July 4.

“They unfortunately couldn’t save her-she died and died,” her mother, Nicola Foster, told the BBC.

Herpes is commonly transmitted by skin-to-skin contact, and nearly 70% of adults have one of two strains by the age of 25.

Some people develop cold or genital herpes, but about two-thirds are asymptomatic or mild.

Analysis of medical records revealed that neither Kimberly nor Samantha had previously had herpes, so they would not have built a natural protection against the virus.

Women in late pregnancy also have less protection from the immune system.

Survey conducted in a closed room

More than a year after the females died, each of their families received a letter from coroner Katrina Hepburn saying that there would be no cause of death hearing about their death.

They also investigated the beliefs of pathologists that women were infected with herpes “before hospitalization.”

However, a BBC journalist investigating the East Kent Hospital Trust’s obstetric services since 2019 noted that Kimberly and Samantha died this spring.

While reviewing documents sent to their families, they discovered that the Public Health Service (PHE) had investigated how women could come into contact with the herpes virus.

Kimberly’s family requested PHE to grant access to the investigation and sent an edited email between PHE, the East Kent Hospital Trust, other NHS agencies, and staff at a private laboratory called Micropathology. bottom.

The e-mail showed that the PHE investigation continued even after the coroner told the family that no cause of death hearing would be held.

The email also revealed an important link between the deaths of the two: the same surgeon and midwife participated in both Kimberly and Samantha caesarean sections.

Micropathology was asked to examine the two viruses infecting a woman to see if they were genetically identical and could have come from the same location.

The email indicates that the parts of the virus tested were the same.

In one email, someone working at Micropathology said that both cases “look like surgical contamination.”

In another email, a Micropathology worker said, “It seems like the most likely explanation. [is] These strains are probably the same … This also weighs on the idea that these two women were infected with the same virus. “

The institute asked the East Kent Hospital Trust to provide a mouth or lesion swab from an “O & G (Obstetrics and Gynecology) suspect,” but this was not provided.

In a statement, the trust states that the surgeon has undergone an oral occupational health check. He had not been tested for the virus at the time of surgery, but had no history of herpes infections and no lesions on his hands.

KentOnline understands that surgeons are not working in the trust.

Peter Greenhouse, a sexual health consultant with 30 years of experience in this field and a particular interest in herpesviruses, reviewed the cases of the BBC and the documents found.

Contrary to pathologists, Greenhouse believes that the most likely scenario is the accidental inheritance of the infection by a caesarean section surgeon.

“The only common source here is the surgeon who performed the surgery in the hospital-based scenario,” he says.

Greenhouse told the BBC that the surgeon may have had severe herpes symptoms. It had a herpes infection on the fingers, from open wounds to “very slight” ridges that are often overlooked.

“This is a very rare but biologically plausible method of infection,” says Greenhouse.

The BBC says four other experts in sexual health and virology supported his theory.

Kimberly and Samantha’s family are calling on coroners to hold an inquest for the deaths of two women.

“When they get a little older, they will need to know why their mummies died,” she told the BBC.

“The investigation, led by the Trust and Healthcare Safety Research Department, has received advice from many experts and concluded that it is impossible to identify the source of either infection.

“The surgeons who performed both Caesarean sections had no history of hand lesions or viruses that could cause infection.

“The treatment of Kimberly and Samantha was based on the various symptoms presented during their illness. Our idea is in their family and we are as much as we can to answer their concerns. I will do that. “

According to the BBC, Peter Greenhouse is currently conducting further research on mortality and hopes that the guidelines will change and, of course, new mothers with similar symptoms will be tested for herpes.

“After such a tragic scenario, it’s the only constructive result one can hope for,” he said.