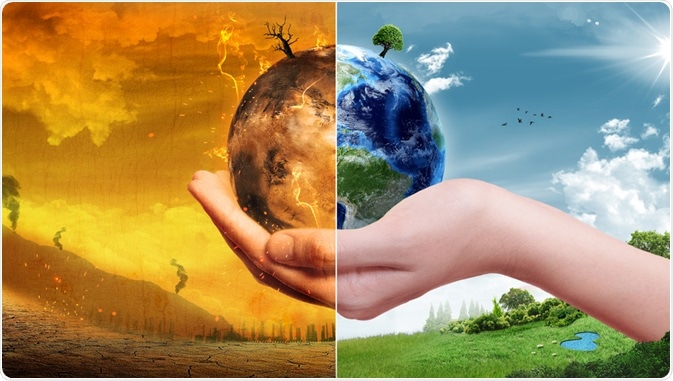 Climate change includes changes in global or regional climate patterns. The main cause of climate change is the presence of greenhouse gases in the atmosphere, such as carbon dioxide, methane and nitrous oxide. High concentrations of these gases have resulted in elevated temperatures, wet / dry cycle changes, droughts, extreme frosts and heat waves, heavy rains and storms, and increased fire frequency.

Human consumption in several sectors, including food supply, energy, transportation and livestock, has increased greenhouse gas levels in the atmosphere. Therefore, these processes have contributed significantly to climate change for decades. As a result, climate change has become one of the biggest social science problems faced when global temperatures are reported to exceed 2 ° C by 2050.

Due to the seriousness of this problem, scientists are working to find ways to solve climate change. One of them involves the use of microorganisms. Specific ways to use microorganisms to mitigate climate change include greenhouse gas sequestration and sustainable next-generation biofuel production.

Use of microorganisms for carbon sequestration:

Soil is classified as the largest carbon reservoir. Naturally, carbon is taken into the soil as carbon dioxide by photosynthesis of plants and decomposition of living organisms. This process, which removes carbon dioxide from the atmosphere and increases the organic carbon storage of soil, is known as carbon sequestration. Scientists aim to reduce carbon emissions to resolve climate change by using soil microbial inoculants that promote carbon sequestration.

Soil microorganisms, such as growth-promoting bacteria and fungi, have been shown to sequester carbon in the soil. Through this process, microorganisms can reduce carbon dioxide in the atmosphere and can be used to tackle climate change issues. This could be achieved by introducing environmentally friendly microbial formulations with carbon sequestration capabilities into agricultural soils.

Various soil microorganisms contribute to carbon sequestration through various mechanisms. Some of these mechanisms include metabolic activity that also has the ability to capture carbon dioxide, form nutrient tissues and products, form soil aggregates, and precipitate carbonates. In addition, microorganisms depend on how efficiently they sequester carbon.

For example, certain microorganisms have a faster metabolic rate, thus sequestering carbon faster. The variety of mechanisms and efficiencies offers the possibility of using specific microorganisms on specific lands for greater benefit.

Despite proven ability to sequester atmospheric carbon dioxide into soil, limited research has focused on using microbial inoculants as a carbon sequestration technique to resolve climate change. .. Therefore, more effort and research is needed to determine how effective this approach is in mitigating climate change.

Use Microbes to Reduce Methane Emissions:

Methane is another atmospheric greenhouse gas that contributes to climate change and is, in fact, more powerful than carbon dioxide. Significant amounts of methane are produced by human activity, including the use of fossil fuels and landfills. Therefore, scientists are also devoted to research to reduce methane emissions through the use of microorganisms.

The bacterium known as Metanotrov was first found in Arctic mineral soils. It is also often found in environments such as hot springs and mud jars. Methanetrofu is a unique type of bacterium because it uses methane for metabolism as a primary energy source. Methane trof can use methane as an energy source due to the presence of an enzyme known as methane monooxygenase. In addition, methanotrofu has a high affinity and is very efficient in consuming methane.

It is estimated that about 40-60% of the methane produced is consumed by the metanotroves in the wetland environment. For this reason, as the climate change problem worsens, Metanotrofu is getting more and more attention. Over the last two decades, it has led to hundreds of studies dedicated to these microorganisms. The purpose is to use methanotrofu as a biocatalyst for agricultural soils and landfills, ultimately lowering atmospheric methane levels.

While the use of fossil fuels serves as the primary source of energy, this energy generation process also contributes to climate change as it emits greenhouse gases. As a result, scientists are now investigating the ability of microorganisms to use renewable resources to produce the next generation of sustainable biofuels, maintaining energy supplies while resolving climate change. Biofuels include fuels produced by renewable resources through biological processes.

Studies have confirmed the ability of microorganisms to produce biofuels via biological pathways. Because all microorganisms, including bacteria, fungi, and microalgae, have metabolic diversity, different microorganisms use different substrates as a starting point for biofuel synthesis. for example, Clostridium Thermocerum Biofuels can be produced using energy from plant-derived lignocellulosic.

In contrast, photosynthetic organisms such as microalgae and cyanobacteria utilize carbon dioxide as an energy source for producing biofuels. Finally, as mentioned earlier, methanotroves consume methanol as an energy source, which can trigger the biological processes required to produce biofuels.

A challenge faced when trying to use microorganisms for sustainable biofuel synthesis is the efficiency of microbiological pathways. Based on current pathways, the productivity and yield of microbial biofuel production is too low to justify industrial use. Scientists are trying to address these issues by redesigning and designing existing metabolic systems and discovering new enzymes, microorganisms, and pathways to improve productivity and yield.

A new booster plea as the threat of Omicron approaches