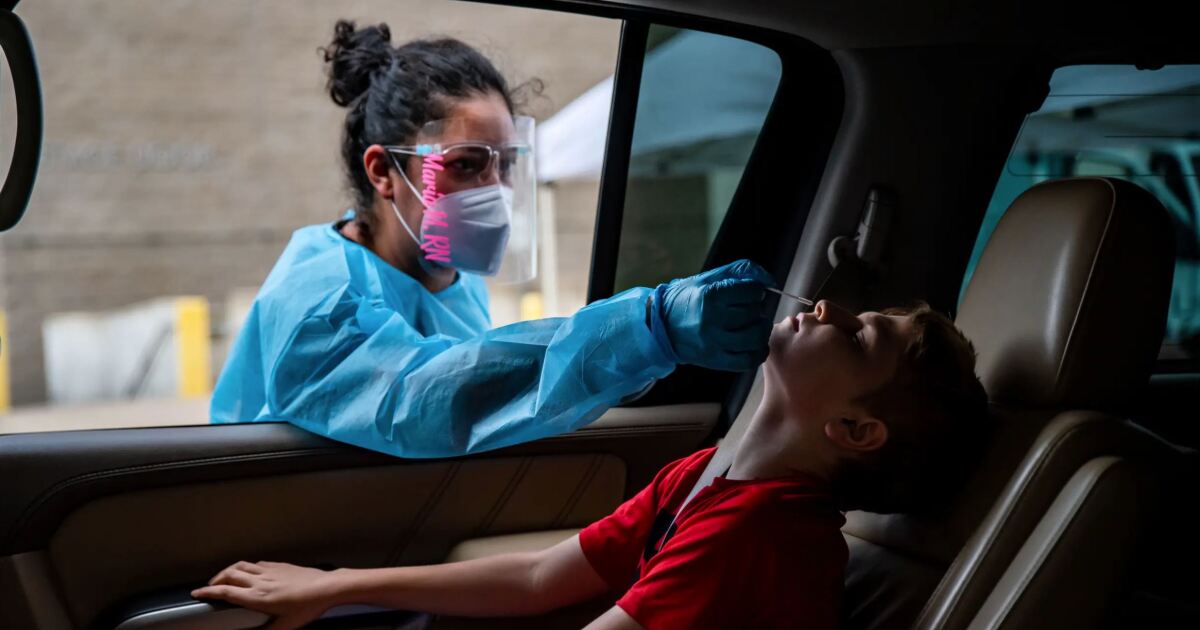 There is a little list of what Vanessa Louis, the mother of Richmond, Texas, promised her daughter Zoe could do after her third year vaccinated with the COVID-19 vaccine.

Visit to Burns & Noble. Afternoon at a local museum.

Returning to school directly is also included in the list, but after going to school completely online for the past year and a half, it’s not school that Zoe misses.

“I really don’t like working, so I just missed my friends. That’s kind of annoying,” an eight-year-old kid told The Texas Tribune in an interview. “Sometimes we played during breaks and went down the slide.”

So, in November, she was the first Texas child of her age to roll up her sleeves and inoculate COVID-19, and after the federal government she appeared with her mother, aunt, and cousin at the Texas Children’s Hospital in Houston. I did. The government has approved Pfizer shots for children ages 5-11.

Since then, 693,345 Texas primary school students have been vaccinated at least once, accounting for about 24% of the state’s 2.9 million children aged 5 to 11 years, which is a national percentage. It matches. Nearly 390,000 of the 5-11 groups are fully vaccinated, and more than half of Texas people aged 12 to 15 years are fully vaccinated.

Immunization rates for children in Texas are higher than in many other southern states where low rates of 10% have been recorded. In the first two weeks after the approval of emergency use in the younger age group, about 100,000 children appeared for vaccination in Texas school clinics, pharmacies and pediatrician clinics.

Zoe was in it.

“As a family, we were excited,” Louis said. “To go first, you need to have more parents, not fewer.”

However, Zoe is still waiting to return to school, as the Omicron variant of COVID-19 pushes cases beyond those recorded in Texas during a pandemic. She and her mother continue to take classes online while waiting for staff to stop calling due to illness, and students frequently switch between teachers and classes.

Children with COVID-19 are appearing in hospitals and pediatrician clinics in record numbers as Omicron rampages in the unvaccinated community.

Some pediatricians have been sick for most of their staff for several days as their parents swapped appointments or searched for a new family doctor for common winter illnesses such as the flu and other non-COVID infections. I had to take a leave of absence.

“They called us and said,’You have to cancel your promise today. No one on the staff can fulfill it,’ said his young daughter’s promise during the holidays. Houston communications expert Evan Mintz, who had to reschedule, said. “It was a day late, and it’s not bad in the grand plan of things. But nevertheless, it was a shock to us. It had a direct impact on us.”

Frisco’s pediatrician Seth Kaplan managed to stay open, but he said he had to temporarily stop accepting new patients.

“It just had to be overwhelmed,” he said.

At the Texas Children’s Hospital in Houston, hospital pathologists said positive cases of patients were about 70 COVID-19 patients one month after zero in early December, primarily unvaccinated children. One Dr. Jim Versalovich said. He said the hospitalization of children by COVID-19 broke all previous pandemic records and proceeded at an astonishing speed. Only a few weeks after Omicron was first detected in Texas, it caused more than 90% of new cases appearing in his hospital — less than a month after the vaccine was approved by an infant.

“During this surge in Omicron, there are astounding numbers here,” Versalovich said at a press conference in early January.

That same day, the state broke its own record for children hospitalized with COVID-19, reporting 350, five more than the previous peak a few months ago.

On Friday, the State Department of Health released data on 3.8 million COVID-19 cases identified in Texas during the first two years of the pandemic. Almost 19% (722,393) of them were diagnosed in residents under the age of 20. Demographics do not include cases reported in 2022.

In the first week of January, the Texas Department of Health and the Texas Education Agency reported that approximately 26,500 students and 11,800 staff were infected with COVID, according to data released Friday.

Although the number of student cases has approached an unprecedented level since school began last fall, there are more cases of COVID-19 among staff than at any other time in the pandemic. The number can increase as more districts report the number to the state. Current numbers include only about half of all 1,200 districts in the state, and the number of districts reporting arbitrary numbers is inconsistent from week to week.

Meanwhile, on Wednesday, the state reported 471 children with COVID-19 at a hospital in Texas. Most of them have not been vaccinated, hospital officials said. However, there are no state data detailing the number of COVID-19 pediatric patients in the Texas Pediatric Intensive Care Unit.

Versalovich said the number of COVID-19 patients in the 5-11 year group is in the intensive care unit compared to the previous surge due to the availability of vaccination.

They develop serious lung infections, as well as those that can be infected with the more common pediatric respiratory disease, respiratory syncytial virus (RSV).

Versolavic warned against assuming that Omicron appears to be less severe than the adult Delta, but less serious for children.

“That’s what we’re going to watch very carefully,” he said. “There is no solid evidence that the disease is more severe. [in children] At this point, use Omicron rather than Delta. … But frankly, this is so fast that it’s not as mild as a child. And we need a little time to keep following and see these kids. “

These patients are not using it because the state is no longer in a simultaneous out-of-season surge in RSV and influenza, as seen in the summer. According to Versalovich, the number of beds is the same.

According to Versalovich, some of the children admitted to the COVID-19 census were virus-positive during regular screening after appearing in the hospital for something else, but comorbidity. Identifying differences can be complicated if is involved.

“What I can say is that since we are looking at the data in real time, it is clear that the majority of cases have COVID-19 as a major factor or a key factor in hospitalization,” he said. rice field. “Of course, we need to investigate this further to see if we can get more reliable numbers.”

Not so serious case

There are some encouraging notes this time around, Versalovic said.

“We learned a lot during this pandemic, and we are in a much better position in January this year compared to January last year in vaccination,” he said.

Vaccine expert Dr. Peter Hotez, a virologist at Baylor College of Medicine in Houston, believes parents don’t need to vaccinate their children because Omicron may be less severe than their predecessor. Therefore, it is not possible to vaccinate a child. ..

It is the concept of putting children at real risk from the long-term complications of COVID-19.

Recent studies from London show that 1 in 7 children With COVID, long-term, severe or chronic symptoms known as “long COVID” appear.More recent Research from the Centers for Disease Control and Prevention He noted an increased risk of diabetes in infected children.

“Parents are not in a hurry to vaccinate their younger children,” Hotez said. “I think the problem is that the federal government, and certainly the state government, hasn’t made enough claims about why children need to be vaccinated. People often have low mortality rates. I think it’s the focus, but as I’m seeing, mortality is just the tip of the iceberg when it comes to childhood illnesses due to COVID. “

Zoe Louis said he was proud of what he could do when he was young to protect himself and his community. And her mom is proud of her.

“I just had that theme,” this is your shot, “and ran through my head all the while she got it,” said Vanessa Louis. “It was sweet. It was really sweet.”

Kaplan, Frisco’s pediatrician, said the number of vaccinations could be higher among children, but he hopes it will improve.

“I’ve never heard’thank you’like in the last few weeks,” he said. “They really feel a great, clear sense of security that they are finally able to do this for their children.”

This article originally appeared in The Texas Tribune https://www.texastribune.org/2022/01/14/texas-covid-19-children-hospitalizations/..

The Texas Tribune is a member-backed, nonpartisan newsroom that informs and engages Texas people about state politics and policy. For more information, please visit texastribune.org.

A “long COVID” that spurs legal questions for employers