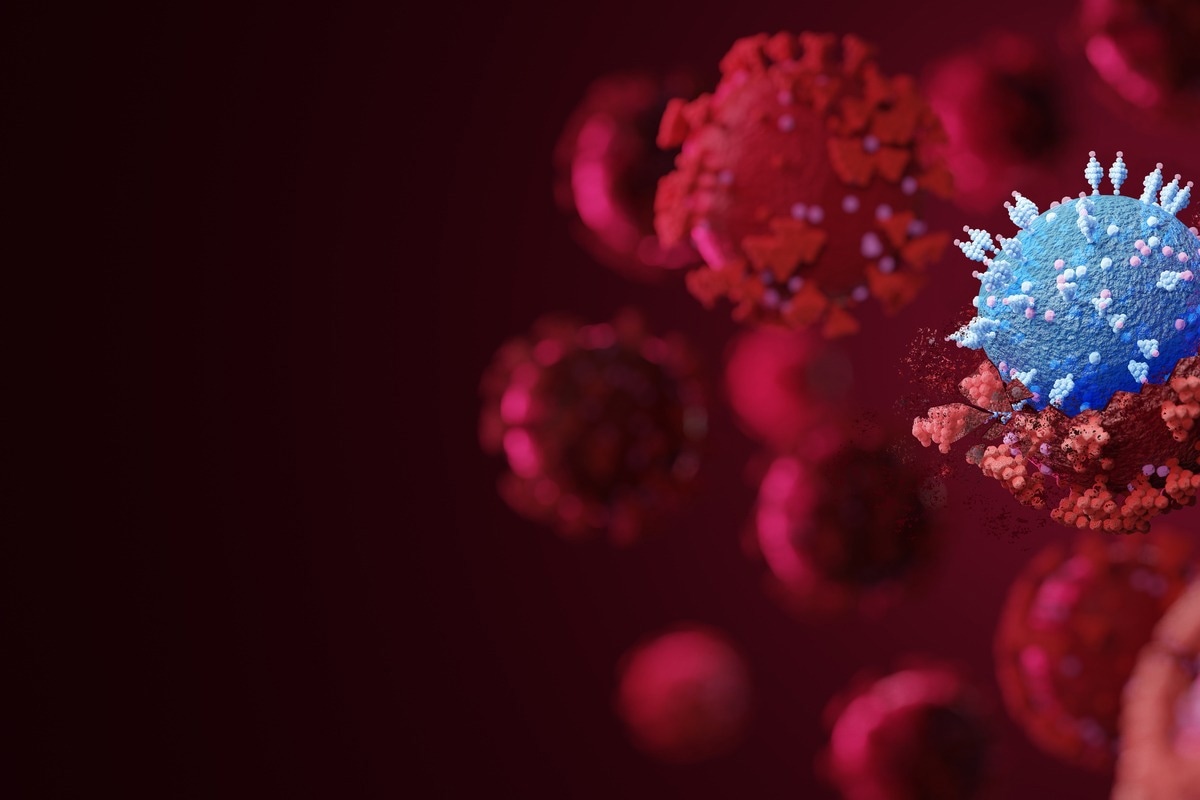 In a recent study published in PLoS ONE, Researchers compared mutations in the coronavirus 2 (SARS-CoV-2) omicron variant of Severe Acute Respiratory Syndrome with others and highlighted their evolutionary differences. In addition, the authors investigated SARS-CoV-2 mutants that infect animals.

Monovalent vaccines using adenovirus or messenger ribonucleic acid (mRNA) provided significant protection against the pandemic of coronavirus disease 2019 (COVID-19) in many countries.However, the vaccine Effectiveness Low for highly mutated SARS-CoV-2 omicron variants. In addition, questions have been raised about the origin of Omicron, and it is believed that the increase in Omicron infections is due to the fact that Omicron mutated earlier than the development of the latest vaccines.

In this study, researchers compared mutations in the SARS-CoV-2 omicron mutant with other mutations and highlighted their evolutionary differences. In addition, the authors investigated mutants that infect animals.

Nucleotide (N) sequences were downloaded on December 27, 2021 (n = 27,000) from the Global Initiative for Sharing All Influenza (GISAID) Databases. In addition, the African region sequence was downloaded between July 1, 2021 and January 15, 2022. Only complete sequences containing less than 1,000 nucleotides were selected for analysis, characterized using principal component analysis (PCA), and sample characteristics were evaluated based on sequence differences. ..

Each PCA axis showed differences in N sequences at specific sites, and multiple axes were used to study the evolutionary characteristics of the SARS-CoV-2 mutant. We compared the results with mutants that infect animals and explored the possibility of developing new vaccines using weakened SARS-CoV-2 mutants. The first axis of human adaptation was created across four independent groups using data up to April 2020 and was used to determine the origin of the variant.

The other PCA axes considered for analysis were derived utilizing two variants of concern (VOC) and variants of interest (VOI), from SARS-CoV-2 AlphaVOC to OmicronVOC. Omicron VOCs with the highest mutations formed PC1 and were used to determine variability of Omicron VOCs and other mutants that formed PC2. Two VOCs and 1500 samples were used to characterize the samples that infect animals. The team evaluated the efficacy of the vaccine against infected populations residing in Japan and then investigated the migration of variants by PCA analysis.

The fifth SARS-CoV-2 wave ended after the first and subsequent rounds of COVID-19 vaccination. However, a sixth-wide pandemic occurred, and although COVID-19 was less severe than expected, some infected individuals required hospitalization. Significant changes were observed in the association between the prevalence of COVID-19 and the mortality associated with COVID-19, reflecting the lethality of the SARS-CoV-2 mutant.

Evaluating the PCA axis from data up to April 2020 and comparing it to recent axis data, the variants appear to be in three different groups, at which point SARS-CoV-2’s adaptation to humans is complete. It looked like it was. Sequences of animal-infected mutants belonging to the sequenced mutant group are transmitted in several subforms of SARS-CoV-2 mutants that are endemic to deer, mink, cats, dogs, and zoo-based animals. The origin, which indicates that the disease may have originated in humans, was most likely derived from the SARS-CoV-2 mutant, which is endemic in areas where many cases of human infection have been reported.

The currently predominant mutants have been found to have more amino acid substitutions (mutations). The Omicron variant was far away from other SARS-CoV-2 mutants. In the African sample, many cases of Omicron infection were recorded in the upper right corner, and the infectivity of Omicron was increased due to the presence of an insertion mutation in the SARS-CoV-2 spike (S) protein sequence containing three amino acids. It shows that it is high.

The SARS-CoV-2 variant, in which one variant causes one epidemic per region, disrupts the migration of the variant, and causes the same, is the SARS-CoV-2 epidemic that occurred in the following calendar year in individuals infected with the variant. Was not detected. He developed an acquired immune response against the mutant without developing COVID-19. If the mutant does not generate enough mutations to overwhelm the adaptive immune response, it will not re-initiate the SARS-CoV-2 epidemic.

Omicron was first detected in South Africa, but the Group 1 subspecies to which Omicron belonged did not show prevalence in countries after August 2020, and the C.1.2 subspecies of the same group was 2021 7 Identified in a short period of the month. Far from Omicron. The B.1.1.519 variant of the same group was close to Omicron. However, the association between B.1.1.519 and Omicron remained unclear due to insufficient recording.Omicron was highly mutated and neither of these mutations showed similarities to existing ones. coronavirus Also, nothing is shown in common with SARS-CoV-2 mutants that infect animals. Therefore, the possibility of Omicron transmission from animals to humans was ruled out.

Unlike strains that rapidly mutate to animals and infect humans, strains adapted to animals were not highly pathogenic to humans. Therefore, they could probably be used as a SARS-CoV-2 vaccine. Rapid acclimation was observed among the animals. As an example, PC21 and PC25 mutations in the animal sample axis have shown adaptation to deer and mink in some countries.

Animal viruses did not show mutations in the nucleocapsid (N) and S proteins at the same concentrations as human viruses. Variants away from human variants do not reinfect humans, as indicated by clustering of human samples in the center of PCA analysis, except that variants detected in the Netherlands are prevalent in humans. It was. The variants were far from the human virus and even farther from the mink virus, so they may have been detected by mink acclimation.

Overall, the findings show that Omicron VOCs did not originate in South Africa, and Omicron’s parents probably lacked sequence analysis, overcame acquired immunity from vaccination, and were mature enough to enter a country where sequencing was performed. It was shown that it occurred in the area where the disease occurred. By the time Omicron was detected in South Africa, it probably had spread to other countries, and the current pandemic could be the result of this delay. Given the increasing incidence of COVID-19 in Japan, healthcare authorities must resort to means other than vaccination to control SARS-CoV-2 infection.