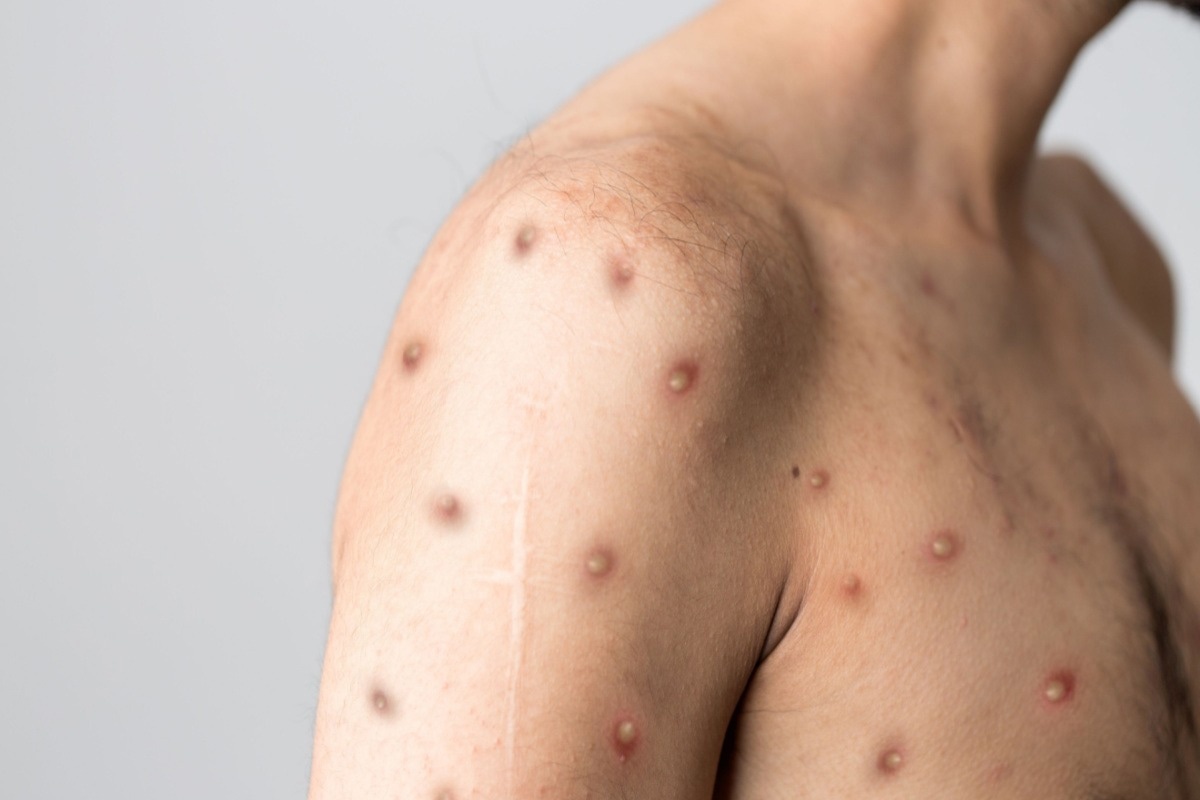 In a recent review published in InfectionResearchers have summarized the epidemiology, etiology, clinical manifestations, diagnosis, prevention and treatment strategies of monkeypox (MPX) caused by the monkeypox virus (MPXV).

Unexpected outbreaks of MPX in some non-epidemic countries have raised global concerns. Most MPX cases of the ongoing 2022 outbreak were identified in gay, bisexual, or other men (GBMSM) having sex with men with atypical clinical symptoms. Preventive and control measures need to be rapidly developed and adopted to prevent the efficient transmission of MPXV from person to person worldwide.

In the current review, researchers have summarized the epidemiology, etiology, clinical manifestations, diagnosis, and prevention and treatment strategies of MPX.

MPXV was first discovered in a Danish laboratory in 1958. The first human cases of MPX were reported in the Democratic Republic of the Congo (DRC) in 1970 in a 9-month-old boy during smallpox eradication, and by 1980 there were nine times as many MPX cases in the Democratic Republic of the Congo as in the previous year. Between 1996 and 1997, 51 MPX cases had MPX outbreaks in DRC.

By 2009, 92 cases were reported in Africa and by 2019 it had increased to 277 cases in Africa. In September 2017, the West African clade caused the largest MPX outbreak in Nigeria. From 2017 to 2019, 183 MPX cases were reported, increasing to 502 by October 2021. On May 7, 2022, the UK Health and Safety Agency (UKHSA) reported MPXV for individuals who traveled to Nigeria. A week later, two MPX cases with no history of travel to Nigeria were reported.

Since then, MPXV has been detected in many non-epidemic countries, with most non-epidemic MPX cases reporting a history of visits to North America and Europe. Between January 1st and June 22nd, 2022, 3413 MPX cases were reported in 50 countries / regions, 86% of which belonged to Europe and MPXV with China on June 24th, 2022. Detected in the United Kingdom (UK).

MPXV is a double-stranded deoxyribonucleic acid (dsDNA) virus with a linear envelope. Orthopox virus Genus within Poxvirus family A family with intracytoplasmic replication. The virus is mainly composed of four components: the outer skin, which contains lipoproteins, the outer body, the outer membrane, and the inner core. The end of the MPXV genome is composed of an inverted terminal repeat (ITR) sequence and 190 open reading frames (ORFs) with more than 180 nucleotides.

The MPXV sequences are phylogenetically divided into West African clade and Congo Basin or Central African clade with case fatality rates of 3.6% and 10.6%, respectively. MPXV detected in 2022 was found to contain 50 single nucleotide polymorphisms (SNPs), exceeding the previous mutation rate of orthopox virus. This shows that MPXV is highly adaptable to humans.

MPX is a predominantly zoologically transmitted infectious disease, including chimpanzees, Kenyan monkeys, African elephants, wild wild boars, camouflage, Gambian rats, dogs, appetizers, and West African squirrels. , There are several animal reservoirs. MPXV is the contact of MPXV-infected animals / humans / or MPXV-contaminated substances with infectious ulcers, body fluids, caps, or MPXV-contaminated substances from animal to human or from person to person. It is transmitted through or through the respiratory tract. Splashes, gender or intimate contact. People who have not been vaccinated against smallpox are at increased risk of MPX infection.

Symptoms of MPX are similar to those of smallpox, but less severe, and MPXV is incubated for 1-2 weeks. However, the severity of MPX symptoms can increase in children, immunocompromised people, and pregnant women. During the initial infiltration stage (5 days), the patient experiences chills, fever, severe headache, lymphadenopathy, asthenia, malaise, myalgia, and low back pain.

Within 1-3 days of fever, a rash begins on the patient’s face, followed by a skin rash phase characterized by rapid spread to the extremities, palms and soles, oral cavity, conjunctiva, and cornea. .. Skin lesions begin as spots, papules, vesicles, and pustules, form crusts, turn into scabs, and eventually shed in 2-4 weeks. In particular, cases of MPX in the ongoing 2022 outbreak showed atypical clinical manifestations initially with a genital or perineal rash in individuals with MSM.

Diagnosis, treatment and prevention of MPX

Specimens for MPXV testing include those obtained from skin lesions, saliva, the surface of nasopharyngeal swabs, exudates, roofs or crust swabs. MPX is diagnosed primarily on the basis of viral isolation and real-time reverse transcription-polymerase chain reaction (RT-PCR). As a secondary test, acute and convalescent serum samples can be used to detect anti-MPXV immunoglobulin M (IgM) and IgG.

To date, there is no specific treatment for MPXV, and antiviral drugs such as brinsidefovir, cidofovir, and tecobilimat are supportive by reducing sequelae and relieving symptoms by managing complications. May provide symptomatic treatment. MPX patients should remain isolated until the scab falls and use designated items such as towels, clothing, and utensils.

The authors state three main reasons for the ongoing 2022 outbreak: (I) MPX causes mild symptoms and therefore MPXV infection is not well controlled in time. (Ii) The MPXV sequence mutated faster than expected when the current MPX occurred. (Iii) Herd immunity It has declined over time since vaccination against smallpox was discontinued in the 1970s.

MPX is an international health problem, a global effort to raise awareness, increase MPXV testing, develop effective antivirals, disinfect spaces, and adopt preventative strategies to limit MPXV infection. Need to be adjusted. Strict quarantine measures need to be taken, imports of African primates and rodents should be restricted, and individuals in close contact with MPX patients in particular should be vaccinated against JYNNEOS or ACAM2000. In addition, smallpox vaccination may be available in case of emergency.

Studies say long COVIDs can cause hair, loss of libido, and brain fog.