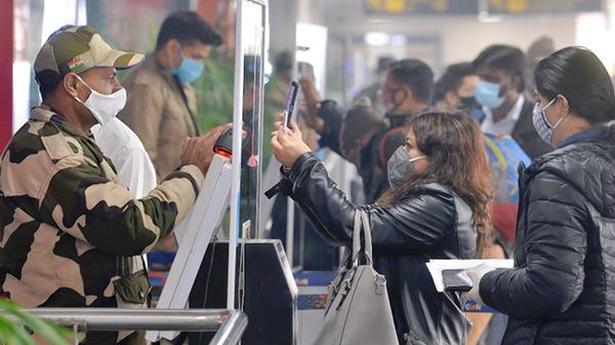 What is included in the new travel guidelines? Are existing Indian vaccines effective against these strains?

So far: Central government this week Three mutants of SARS-CoV-2 virus — From South Africa (4 cases), Brazil (1 case), United Kingdom (187 cases).Following this, the government issued A set of new guidelines for traveling abroad.. A new rule, which will come into effect on 22 February at 11:59 pm, was announced Wednesday, stating that “this document will be reviewed from time to time based on risk assessment.”

Why are new strains a concern?

The World Health Organization reports that the new variants show improved transmission. Strains from the United Kingdom, South Africa and Brazil have been detected in 86, 44 and 15 countries, respectively. “India has stabilized active COVID-19 cases, but these new strains and loosenings can cause a surge in numbers,” said VK Paul, a member of NITIA ayog.

Coronavirus | Challenges in developing and testing vaccines against mutants

What is included in the new travel guidelines?

India does not have direct flights from South Africa and Brazil, but all international travelers arriving and departing flights from the UK, Europe and West Asia must submit a self-assessment form online and submit a negative COVID-19 report. Must be carried. Mention the travel history of the last 14 days. They also need to mention whether they plan to disembark at the arrival airport or fly further within India.

Airlines need to identify travelers arriving or passing from the United Kingdom, South Africa and Brazil and separate them during travel and disembarkation. These travelers are required to provide a sample for testing before leaving the airport. If they are positive, they must be treated according to standard health protocols, the SOP states. The guidelines specify that the contact for a suspicious case is a passenger sitting in the same row, three rows in front and three rows behind, and the identified flight attendant. Contact information for a community of travelers who test positive (during their home quarantine period) will be institutionally quarantined at a separate quarantine center for 14 days and tested according to the Indian Medical Research Council (ICMR) protocol.

International travelers are required to submit a self-assessment form and upload a negative COVID-19 RT-PCR report prior to travel. The test is conducted 72 hours before the start of the trip. Passengers are also required to submit a declaration of the authenticity of the report, and if it turns out they are not responsible for criminal charges. Only those traveling to India due to emergencies such as the death of a family member are allowed to arrive without negative reports. However, you must request an exemption on the online portal 72 hours before boarding.

Coronavirus | According to scientists, British mutants are of concern because they can weaken the vaccine.

The Ministry of Health and Family Welfare, in consultation with the Ministry of Civil Aviation, they said Issued these guidelines After reviewing the situation regarding point-of-entry actions and confirming that these measures have been introduced to minimize the risk of importing mutant strains of the virus.

How many incidents did India record?

The ICMR states that the first independent South African variant to emerge in the country in mid-December 2020 underwent multiple mutations, including the receptor-binding domain of peplomers. Currently, the majority of cases in South Africa are due to this mutation. In India, the strain was detected in January 2021 in four different South African returnees. One from Angola and Tanzania and two from South Africa. ICMR Executive Director Barram Bargaba said.

He added that the first six cases of British strains were reported in India in the last week of December 2020.

Regarding Brazilian strains, ICMR said it emerged independently in Brazil in early January 2021 and was associated with an increase in the number of cases in Brazil, especially Manaus. “A mutation in the receptor binding domain of the peplomer was detected, indicating an increase in transmissibility. India detected a case of this mutant in Brazilian returnees in the first week of February,” he said. Dr. Bhargava said.

Are existing Indian vaccines effective against these strains?

For UK variants, ICMR said the potential for neutralization is consistent with other heterologous virus strains in India and the vaccines we have.

Research is ongoing on the other two variants. “The ICMR-National Institute of Virology (NIV) is attempting to isolate and cultivate South African strains,” said Dr. Bhargava. The Brazilian strain has been successfully isolated and cultured in ICMR-NIV, Pune, and experiments are underway to evaluate the efficacy of the vaccine, he added.

Coronavirus | Clinical trials show that the Indian vaccine is effective against the COVID-19 mutant: ICMR

How are variants monitored?

To regularly monitor SARS-CoV-2 genomic mutations through a multi-lab network, India has established the India SARS-CoV-2 Genomics Consortium (INSACOG), which consists of 10 laboratories. “The consortium has confirmed the status of new mutants of SARS-CoV-2 in the country, established surveillance for early detection of genomic variants affecting public health, and established genomic variants with abnormal events / trends. (Super-spreader events, high mortality / morbidity trend areas, etc.), “said Dr. Bhargava. “The knowledge generated through this important research consortium will also help in the development of future diagnoses and potential treatments and vaccines.”

This story is only available to Hindu subscribers.

Benefits of subscription include:

Find the mobile version of the newspaper article for the day in one easy-to-read list.

Please enjoy reading as many articles as you like without any restrictions.

A selection list of articles that suits your interests and tastes.

The page loads instantly, so you can move smoothly between articles.

A one-stop shop for checking for the latest updates and managing settings.

Learn about the latest and most important developments three times a day.

Can’t you agree? Find out why you should pay for the news.

* Currently, our digital subscription plans do not include e-paper, crosswords or printed matter.