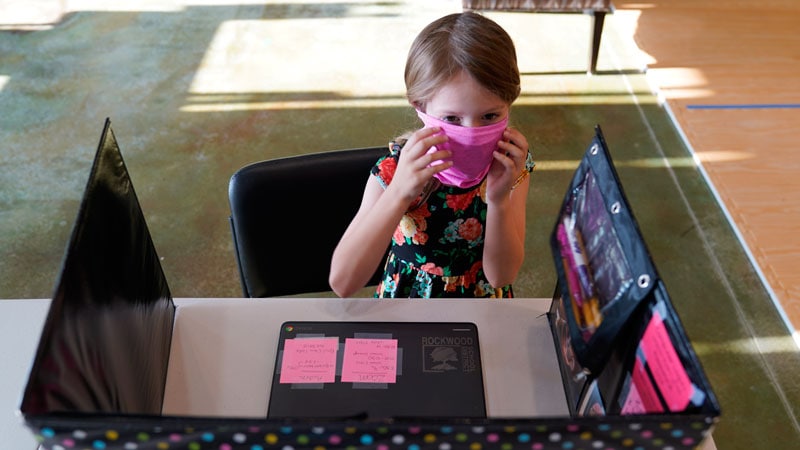 With new daily flow of information, it is difficult to keep up with data on how the coronavirus epidemic affects children and school attendance, and how pediatricians can advise parents. The following is a summary of recently published information on birth and infant outcomes, symptoms seen in infants and children, and a review of recent information on infections at school.

November 2020, US Centers for Disease Control and Prevention (CDC) Public data From 16 jurisdictions detailing the pregnancy and infant outcomes of more than 5000 women with SARS-CoV-2 infection. The data was collected from March to October 2020. Over 80% of women found to be SARS-CoV-2 positive were identified during the third semester. Surveillance found that 12.9% of babies born to infected mothers were born prematurely. In contrast, the expected rate of the population is about 10%, and late pregnancy infections may be associated with an increase. Premature birth... Of the 610 babies born to infected mothers who were tested for SARS-CoV-2 during their stay in the nursery, 2.6% were positive. The infant positive rate for infants born to women with SARS-CoV-2 infections recorded within 2 weeks of birth was as high as 4.3%. Infants who had a mother’s infection more than 14 days before delivery did not have a newborn infection.Current CDC and American Academy of Pediatrics (AAP) Recommendations Examining infants born to mothers with suspected or confirmed SARS-CoV-2 infection.

Data on the clinical features of a series of infants admitted in Montreal, Quebec, Canada were published in December 2020. Survey We identified 0-12 month old babies diagnosed or treated in a single hospital in Montreal from February to May 2020. In total, 25 (2.0%) of the 1165 babies were found to have SARS-CoV-2, of which about 8 were hospitalized; 85% had gastrointestinal symptoms and 81% had fever. there was. Upper airway symptoms were present in 59% of all hospitalized babies who did not require oxygen supplementation. The data as a whole support the idea that infants generally have only mild symptoms at the time of infection and respiratory symptoms appear to be the least common findings.

The lack of significant respiratory symptoms among children with SARS-CoV-2 infection Another study We evaluated more than 2,400 children in Alberta, Canada. Of the 1987 children who tested positive for SARS-CoV-2, one-third (35.9%) were asymptomatic. Some symptoms did not help distinguish between children who tested positive and children who tested negative. The frequency of respiratory symptoms such as myalgia or joint pain, myalgia, malaise, and stuffy nose, dyspnea, and sore throat distinguishes between children infected with SARS-CoV-2 and children not infected. I could not do it. However, among those who were positive for SARS-CoV-2, anosmia was far more prevalent (7.7%) than 1.1% for those who were negative. headache It was present in 15.7% of positives vs. 6.3% of negatives. Fever was slightly more common, with 25.5% in positive patients and 15% in negative patients.

The authors calculated the likelihood ratios for individual symptoms and found that the likelihood ratios for almost all individual symptoms ranged from 1 to 1.8 and were positive on the test. However, the likelihood ratio for nausea and vomiting was 5.5, and for anosmia it was 7.3. The combination of nausea, nausea and vomiting, and headache symptoms produced a likelihood ratio of approximately 66. The authors suggest that these data on walkable children generally do not help distinguish patients who are likely to have positive respiratory symptoms. Although nausea, headache, and both symptoms and fever are very predictable. For schools, the authors focus on identifying children with a combination of these high-yielding symptoms for potential testing and exclusion from school, rather than random or isolated respiratory symptoms. I suggest it might be more useful.

The data released in January and February 2021 may help provide some context, as the risk of infection in different settings is certainly what parents quiz to pediatricians. A CDC report The experience of 17 schools in Wisconsin from August to November 2020 is shining. The study found that SARS-CoV-2 cases among students, school teachers, and staff were 63% of the general public at the time, suggesting that the mitigation strategies adopted by the school were effective. .. In addition, only 5% of students infected with SARS-CoV-2 were caused by school exposure. The faculty and staff case of SARS-CoV-2 was not associated with school exposure.

surely, data Released on February 2, 2021, this example shows that young adults are the number one cause of maintaining an epidemic. Based on data from August to October 2020, school establishments do not appear to be associated with changes in the population level of deaths due to SARS-CoV-2. In October 2020, the authors found that 2.7% of infections were children aged 0-9, 7.1% children aged 10-19, 34% aged 20-34, and 38% aged 35-49. I’m estimating. The two oldest, largest groups ever contributed to the spread. It should be noted that 20-49 years of age is the peak working year for adults, but the sources of the data could not conclude whether the infection was work-related or social activity-related. Their data suggest that prioritizing vaccination of younger working-age adults can have a greater impact on the spread of the pandemic than vaccination of the elderly.

Similarly Systematic review and meta-analysis A recent study examined domestic infections of SARS-CoV-2 and showed that the incidence in the home was 16.6%. Notably, the incidence of secondary households is only 0.7% from asymptomatic cases and 18% from symptomatic cases, with spouse-adult household contacts being children of the household. The secondary incidence rate was higher than that.

these days MMWR report He described the outbreak of SARS-CoV-2 associated with a series of wrestling tournaments held in Florida in December and January 2021. Everyone wants their children to participate in the sport, but such an event can violate some norms to prevent the spread. Avoid close contact and do not mix contacts from different schools. In addition, the event occurred during some of the highest incident case rates in the county where the tournament was held.

Updated AAP was released on December 4, 2020 Guidance for athletic activity A fabric face cover recommended for student athletes during training, competition, travel, and even when waiting for bystanders and not playing actively. Notable exceptions to the recommendations were competitive cheerleading, gymnastics, wrestling and water sports, where the risk of getting entangled from the face cover was too high or impractical.

Overall, evolving data continue to show that school mitigation measures may be effective in reducing the risk of SARS-CoV-2 infection. In addition, the SARS-CoV-2 rate for school children more closely reflects the rate of the community and is probably influenced by what is happening outside of school rather than inside school.

to request, modification Contact us at Here or collabo[email protected]

How does the maternal diet affect the weight of the child?