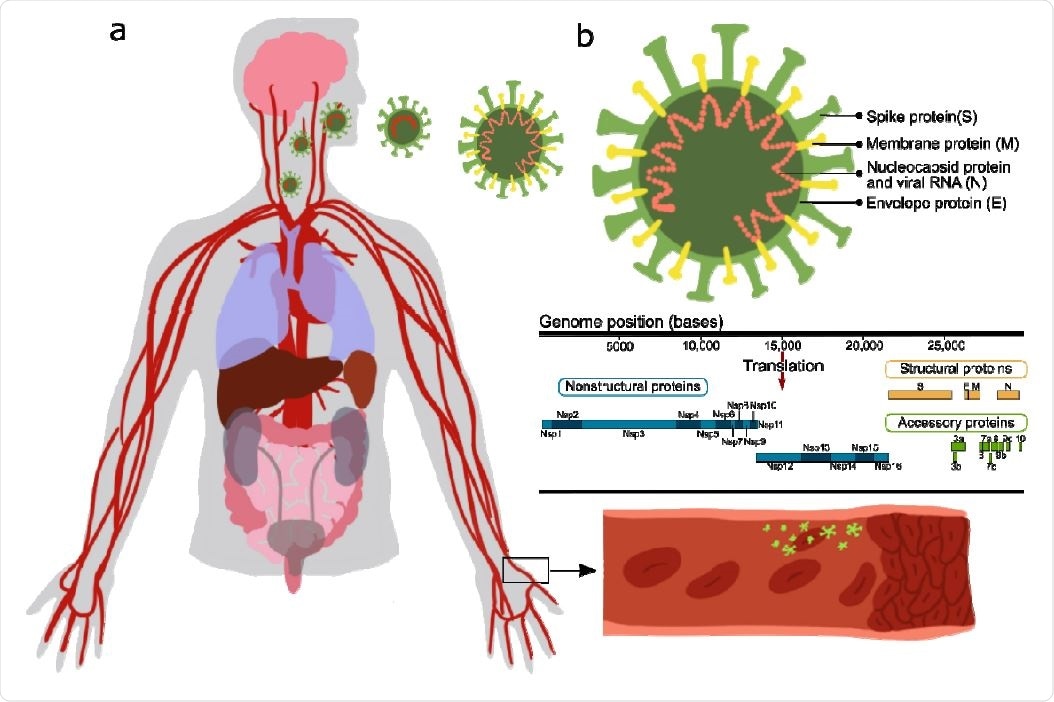 Since coronavirus disease (COVID-19) continues to spread, it is presumed that it is also a vascular disease. Severe Acute Respiratory Syndrome Coronavirus 2 (SARS-CoV-2) affects the body across the respiratory tract, causing a variety of symptoms and complications.

Survey published on preprint server medRxiv*, It is possible to identify and isolate how each SARS-CoV-2 protein independently affects the endothelial response and directly measure endothelial function.

Effect of SARS-CoV-2 protein on endothelial cells. A sketch showing the major organs affected by SARS-CoV-2. Structure and gene composition of bSARS-CoV-2.

COVID-19 causes serious illness in high-risk populations such as the elderly and those with comorbidities.Often severe illness Cytokine storm, Vascular dysfunction, progressive lung injury, and coagulation.

In previous studies, COVID-19 can cause serious illness. After the initial viral infection stage, about 30% of 40 hospitalized patients develop severe illness with progressive lung injury and a severe immune response. As a result, other complications such as hypoxia in the blood and cytokine storms were observed. These led to heart and kidney damage.

Many of these conditions were associated with increased coagulation and vascular dysfunction. It is believed that COVID-19 is not only a respiratory illness, but may also be a vascular disease. It causes leakage of the vascular barrier and increased expression of von Willebrand factor (VWF), leading to increased coagulation, inflammation and cytokine release.

Third, it may be due to the sequestration of human angiotensin converting enzyme 2 (hACE2) by a viral protein that stimulates the kallikrein-bradykinin renin-angiotensin pathway and promotes vascular permeability.

Finally, an overreaction of the immune system that results in a combination of immune cells and neutrophils. This produces reactive oxygen species, inflammatory cytokines, and vasoactive molecules.

The SARS-CoV-2 genome encodes 29 proteins, contributes to disease signs and symptoms, and endothelial complications are unknown.

In addition, the team applied protein-protein interaction (PPI) network analysis to predict endothelial proteins affected by viral proteins. They used the PPI model to determine the role of each protein in other tissues affected by SARS-CoV-2.

Overall, this study identified the most dominant viral proteins that influence the physiological response of the virus. The team believes that this study provides better insight into the mechanism by which the vascular system responds to SARS-CoV-2 infection. From there, the team recommends that the findings may serve as the basis for drug development targeting identified proteins.

The virus has spread to 192 countries and territories and has infected more than 114 million people, so finding an effective drug is essential. The virus kills 2.54 million people worldwide.

5 times a day: 2 fruits and 3 vegetables a day that extend life expectancy