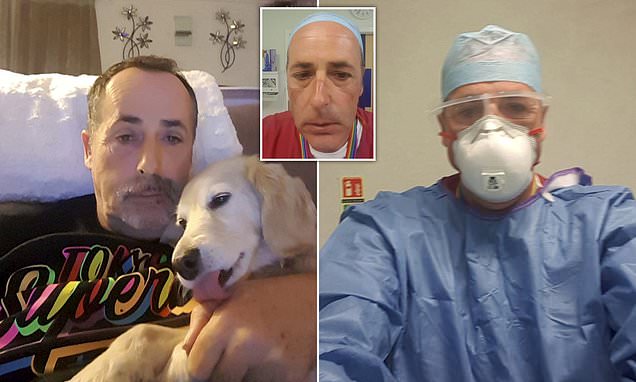 Ann NHS Frontline workers talked about his disappointment after being suspended from the hospital for telling Facebook’s Covid rejecters to follow government rules.

He said he shed tears at work for the first time in 30 years after seeing young and healthy people dying at a hospital in Chelmsford, Essex.

He wrote a long anger on January 4, after seeing a friend posting Covid’s conspiracy theory and begging, “Please listen and be safe.”

The post continued to encourage people to “stay home and take care of themselves” by listening to medical and government advice.

However, he was surprised to be told that he was stopped after an anonymous complaint was made about the content of his post, including bad words.

Gary claims that the NHS Foundation Trusts in Mid-Essex and South Essex said they were in a hurry to “make the trust unpopular” because they were planning to start a 12-hour shift on February 7.

He said he did not mention where he worked and only provided the government’s own advice, but admitted that he was able to avoid the use of such “colorful words.”

Gary, who has played various roles in the NHS for over 30 years, writes: I know some of my friends here don’t believe in the Covid crisis, but let me say this.

“If you get bored during the blockade, come to Essex and cast a shadow on me at work.

“As you know, I work as an ODP (surgery practitioner) in a busy hospital, dealing with all sorts of things in the surgery department.

Gary claims that the NHS Foundation Trusts in Mid-Essex and South Essex said they were in a hurry to “make the trust unpopular” because they were planning to start a 12-hour shift on February 7.

“This Covid lark is completely new to us. We know that we have made a little effort to help people, and we are happy with what we have achieved that day, go to work, help with work, and go home. I went back to.

“Now things are very different. This is not a” common cold or winter flu “.

‘This is the real s ***. I have seen health, young people die in my arms. I saw these people die while I squeezed their chests and regained life.

“Recently, I’ve seen close colleagues not wear face masks and within hours they fall into a drug-induced coma because they’re tired and want to get rid of everything.

“That’s very sad. For f ***. Listen to what the healthcare professionals and government are telling us. Stay home and take care of yourself.

Gary, who has played various roles in the NHS for over 30 years, wrote a long rant on January 4 when he saw a friend posting Covid’s conspiracy theory.

“This is not a fake. The hospital is not empty. These photos in the media are from the outpatient department.

‘All selective appointments and surgery will be cancelled.

‘Listen and be safe.

“You also have to realize that I’m afraid to bring the virus home.

“We have a lot of PPE that we use every day.

“I have to wear this for 13 hours for a few days and people moan about wearing a face mask to go shopping.

Stop becoming’ac *** and do what ya asked for.

“I never thought of having to wear a mask in my life to survive my day, but uh, that’s what it is.”

Gary, who was half retired to help treat a coronavirus patient, vowed never to return to the hospital where he had worked for 17 years.

Gary, who was half retired to help treat a coronavirus patient, vowed never to return to the hospital where he had worked for 17 years.

Gary worked as a surgical practitioner (ODP) in the hospital for nearly 20 years before retiring last summer, but returned to December to help at the forefront just before the second wave of Covid hit. , Worked at the first ICU.time

“I was worried about my days when I inadvertently killed someone. When I found out that it was Facebook, it was ridiculous.

“People die every day and we have been at the forefront of saving as many lives as possible.

“I had to see seven people die in one day, so I cried for the first time in my career. The next day, five people died.

“We started calling it the’culling field’. It was terrible.

“I feel completely betrayed. I poured my heart and soul into this work, and they hurt me. I will never return.”

Gary worked as a practitioner (ODP) in the surgery department at a hospital for almost 20 years before retiring last summer.

But back in December, he worked on the ICU for the first time, helping at the forefront just before Covid’s second wave hit.

At the end of last year, an Essex hospital declared a “serious incident” after being overwhelmed by Covid-19 patients.

He added: “All I wanted to do was help. No matter how difficult it was, I felt like I was doing a good job in the intensive care unit.”

Gary didn’t realize he was stopped until he started the weekend shift at 8am on February 7th.

He was told by his manager that he was already in full PPE and had to go home while he was ready to work.

He called and learned that he had been suspended after an anonymous person filed a complaint against him.

Gary added: I completely deflated and went home. I couldn’t understand why I was suspended. “

He claims he never consulted or spoke to him before the decision was made because they sent an email notifying him of the complaint to the wrong address.

He said it left a “bitter taste” in his mouth.

Gary said: “This is not what NHS needs. We are in a pandemic and the hospital is overwhelmed. We need a lot of people to help.

“They didn’t have to take it so far. I think they could have talked to me and chatted, but instead I was just stopped.”

A spokesperson for the Mid-Essex and South Essex NHS Foundation Trust said: “This is an ongoing investigation, so the trust cannot comment.”

Gottlieb: High school students are likely to get the coronavirus vaccine this year