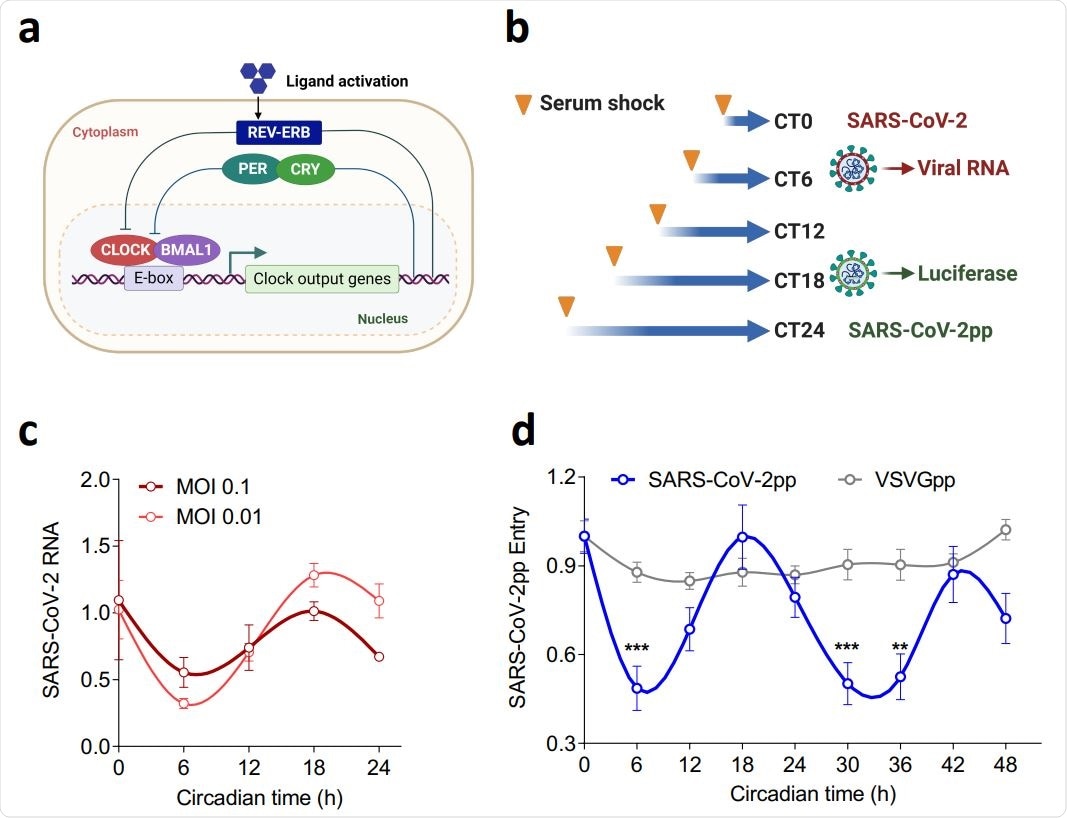 An international team of researchers have found that angiotensin-converting enzyme 2 (ACE2) levels in lung cells change throughout the day, affecting severe acute respiratory syndrome coronavirus 2 (SARS-CoV-2) infection. ..There is also a rhythmic cycle in the invasion and replication of the virus into lung cells, suggesting that the circadian process may affect the viral life cycle...

Circadian rhythms are internal processes that control the sleep and wake cycle of an organism and regulate how the organism responds to the environment. Recent studies have shown that the circadian clock also regulates the susceptibility of organisms to viral infections. Influenza infection in mice lacking circadian regulators causes higher viral replication and severe bronchitis, suggesting a role for circadian function in respiration.

In a new study published in bioRxiv* Preprint servers, researchers report that the circadian route affects the SARS-CoV-2) life cycle.

The authors infected lung epithelial cells Calu-3 with SARS-CoV-2 at different circadian times. They found that the virus showed a rhythmic pattern in replication, with replication rates changing over a 24-hour period.

To see if this periodic replication occurs at the level of viral entry, researchers infected cells with SARS-CoV-2-expressing lentivirus pseudoparticles. Spike protein.. The invasion of the virus into the cells also followed a periodic pattern. Infection increases and decreases in a 24-hour cycle and depends on the interaction of peplomer proteins and the receptor ACE2. In contrast, pseudoparticles of vesicular stomatitis virus (VSV) always infect cells with similar efficiency and did not show periodicity.

SARS-CoV-2 infection is a circadian rhythm

This suggests that the circadian signaling pathway plays a role in regulating the susceptibility of Calu-3 cells to SARS-CoV-2 infection.

Although circadian regulation is thought to be under transcriptional control, quantification of ACE2 and TMPRSS2 transcripts did not show a periodic pattern in Calu-3 cells. However, they saw the expression of some circadian patterns in the lungs, liver, and intestines of mouse models to study circadian rhythms.

When silencing, the major circadian transcriptional activator, Bmal1, Calu-3 cells showed decreased ACE2 expression but no effect on TMPRSS2. These Calu-3 cells also showed reduced infection with SARS-CoV-2 pseudoparticles. There was no difference in VSV infection.

In addition, bioinformatics analysis suggested that approximately 30% of SARS-CoV-2 host factors could be regulated by BMAL1 / REV-ERB. Experimentally, they found a significant reduction in SARS-CoV-2 replication in BMAL1-silented Calu-3 cells compared to the original cells. Therefore, the circadian process can play a role in influencing several steps of the SARS-CoV-2 life cycle, including entry and replication.

Therefore, there may be potential uses for drugs that regulate the circadian clock, such as dexamethasone, which has been shown to reduce the severity of COVID-19 and synchronize the circadian pathway. Several compounds targeting clock proteins have recently been developed and have been shown to inhibit hepatitis C virus and HIV replication.