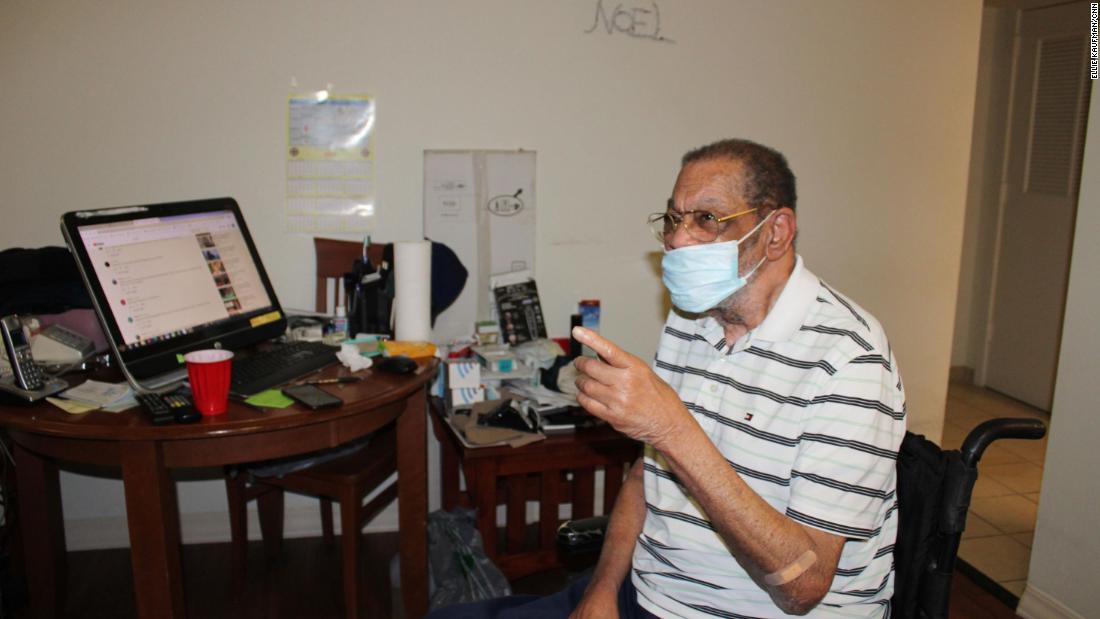 In a small area of ​​the base known as Center Bargo, one of the many military housing complexes where the base’s 6,000 military, civilians and other residents reside, is the Cuban Community Center. The stocky government building is one of the only reminders of a country and culture whose 45-square-mile base leases its land.

Noel West, 89, lives across from the community center. West and the 18 other Cubans still living on the base are known as Special Category Residents, or SCRs. They received this designation by the US State Department after the final closure of the border between the naval base and Cuba in the 1960s. Under this designation, they are considered US citizens.

While the United States and Cuba restored full diplomatic relations in 2015, relations between the two Cold War-era enemies remain strained.

West and the other Cubans have been on this side of the base for so long, many of them older and have since retired. The US Naval Base provides them with home care and has built a home health center for those who cannot live at home on their own.

“She never saw me again in Cuba”

West began working on the base as a clerk in 1955. Originally from the small Cuban town of Guaro, West was living in Guantnamo when he got the job of clerk commanding fuel for airplanes and vehicles at the base. . For nine years, West commuted between his home in Guantnamo City and the naval base, crossing the door between Cuba and the base every day on his travels.

In February 1964, West decided to spend the night at the Cuban barracks on the base instead of returning home because he said he wanted to watch a baseball game. The next day, his neighbor called him and told him that Cuban soldiers had come to his home to pick him up the day before.

“My next door neighbor who lived on the Cuban side called me from his job here on the base and he asked me if I had gone out the day before. I said, “No, why? He said, “Well, there were about eight soldiers looking for you,” West said.

West never returned home to Cuba after that. He remained at the US Naval Base and has lived there ever since.

West believes the soldiers were looking for him because he made comments to his friend who he played baseball with that he didn’t like Castro’s new Communist regime on the island. Shortly after this conversation, guards appeared at his door, he said.

“My mom… she never saw me in Cuba again,” West said.

The mother and son met in Jamaica a few years later when she was able to leave the island, but West has never left the base to return to another part of Cuba since deciding to stay on the island. American side in 1964.

West remained on the base, working in the same clerical job until his retirement in 2011. He worked for 55 straight years, he said, nine before moving to the base full time and to retire with 4000 hours of unused sick leave.

An avid baseball fan, West used to officiate baseball games on base outside of work. Now he spends time on his computer, watches baseball and the news on TV, and receives a visit from two home nurses who take him to do things around the island on a daily basis.

Bringing a culture to life

Dana Lane, the Cuban community manager at the naval base, helps care for the 19 elderly residents, all aged 78 to 90. She organizes cultural activities at the community center, such as Cuban culinary nights, dominoes and bingo games, and helps coordinate care for residents.

Lane has been the Cuban Community Manager since 2015. She is Panamanian.

At one point, nearly 350 Cuban special category residents were living on the base. Over time, people moved or died. Some of the original SCR children moved to different parts of the United States, Lane said.

West chose to stay on the base because he had a stable job, he said, and he liked the base to be the size of a small town like the one he grew up in, but with more than ‘infrastructure. He believed that life on the base would be better than staying in Cuba.

“It’s about the size of my hometown. Not bigger but more advanced,” West said. “I have never seen a concrete building in my hometown.”

West also criticized the Castro regime and remarked that it was difficult for people to get well-paying jobs in Cuba.

Lane said most of the residents who remained at the US naval base were “against the regime”, referring to the Cuban government.

Cuba and the United States have had fractured political relations since the early 1960s. In 1961, the United States attempted to invade Cuba, known as the Bay of Pigs invasion. In 1962, the United States came close to nuclear war during the Cuban Missile Crisis. Former President John F. Kennedy subsequently imposed an embargo on trade with Cuba which remains in place to this day.

In the early 1960s, as relations between the two countries deteriorated, the US naval base at Guantnamo Bay was caught in the changing political landscape. Many Cubans went daily to the base for various jobs, passing through a gate between Guantnamo and the naval base. After the border between the base and the rest of Cuba was closed, residents had to decide whether they would give up their jobs on the base or stay and live on the base forever.

In 1964, Castro shut off the water at the base, claiming the Americans were taking Cuban water. On the US side of the border, a dug hole shows where the US military cut the water line to Cuba.

Next to the water cut-off, a sign read: “On February 17, 1964, Rear Admiral John D. Bulkeley, the commanding officer of the naval base ordered that the water lines be cut and that a section be withdrawn to refute the hypothesis that the United States was stealing water from Cuba “in black all caps.

The Cuban government continues to demand the return of the area occupied by the naval base and says it does not cash the checks that the United States sends each year to pay for the base. Many Cuban historians argue that the United States, an occupying force at the time, heavily armed Cuba to cede land to the base that was originally a coal station for ships.

Now, members of the US military meet with Cuban military officers once a month in so-called “fence line” meetings to discuss upcoming maneuvers and other matters. They turn off the meeting host every month.

Although there is little communication outside of these meetings, there is sometimes coordination. In February 2018, the Cuban military and firefighters helped the base put out a forest fire that detonated landmines on the Cuban side and threatened homes on the base.

US officials say they have removed thousands of landmines placed around the base years ago and replaced them with lights and motion detectors.