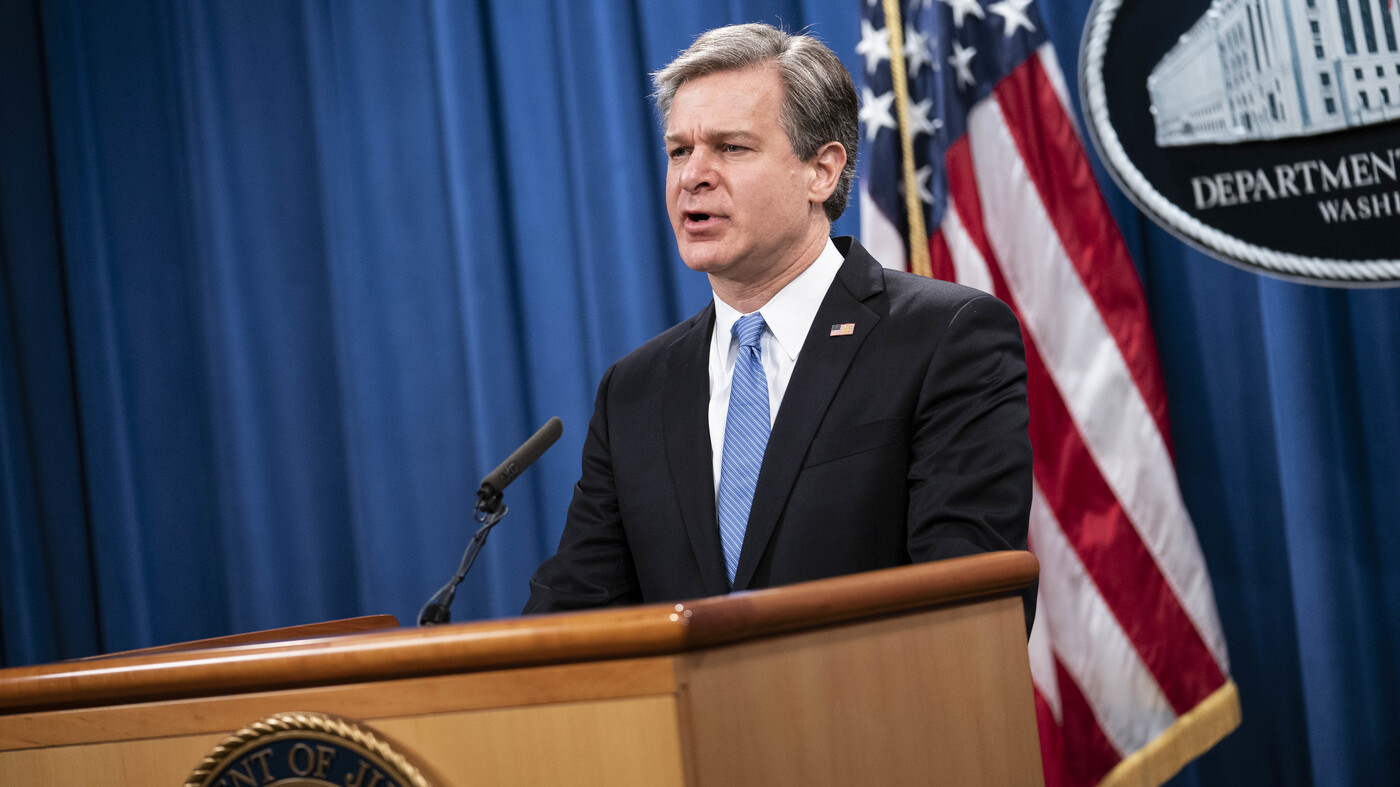 The secret effort to disrupt the 2020 election was publicly disclosed in October last year when FBI Director Chris Wray and others held a press conference to say authorities were aware of Iranian actions. Now two Iranians have been charged. Sarah Silbiger / Getty Images .

The secret effort to disrupt the 2020 election was publicly disclosed in October last year when FBI Director Chris Wray and others held a press conference to say authorities were aware of Iranian actions. Now two Iranians have been charged.

The Justice Department has indicted two suspected Iranian hackers for allegedly attempting to intimidate American voters ahead of the 2020 U.S. election, including sending threat emails and spreading false information.

An indictment released Thursday in New York accuses Seyyed Kazemi and Sajjad Kashian of several counts, including conspiracy to hack, intimidation of voters and transmission of interstate threats.

Prosecutors said Kazemi and Kashian were part of a plot to sow discord in the United States and undermine confidence in the electoral process in the 2020 presidential race.

The secret effort was publicly exposed in October last year when then-Director of National Intelligence John Ratcliffe and FBI Director Chris Wray held a press conference to say authorities were aware of Iranian actions and that they had been disrupted.

Now the US government is blaming the individuals allegedly behind the effort. The Treasury Department also announced sanctions against Kazemi and Kashian, who are both believed to be in Iran, as well as the Iranian company they worked for, Emennet Pasargad.

US officials claim Kazemi and Kashian are experienced hackers who worked for Emennet Pasargad. Justice Ministry officials said the company worked for the Iranian government, but prosecutors do not allege that the actions in this case were led by Iranian leaders.

Prosecutors said that in late summer and early fall 2020, Kazemi and Kashian were investigating at least 11 state voter websites, including those with information on the registration of state voters. voters.

They managed to get into the system of at least one state, identified in court documents only as “state-1,” and uploaded information pertaining to over 100,000 voters.

The defendants then allegedly used the information to send threatening emails, posing as members of the extremist group Proud Boys, to tens of thousands of registered Democratic voters in the state. The messages threatened to suffer physical violence if the recipients did not vote for then-President Donald Trump.

Prosecutors said the defendants again sent emails and Facebook messages masquerading as Proud Boys, saying Democrats plan to change the mail-in ballots to increase their chances of being elected.

The day after the election, the defendants reportedly attempted to use the credentials they had stolen months earlier to gain access to the network of a public media company in an attempt to make false statements to the American public. Prosecutors say the effort failed because the media company previously alerted the FBI to the intrusion and hardened its system.

Justice Ministry officials say there is no evidence to suggest the Iranians were able to change a voter registration or vote.

John Hultquist, vice president of intelligence analysis at cybersecurity firm Mandiant, said the case is a “good reminder” that Russia is not the only adversary that poses a threat to the US election.

“Iran continues to innovate in this area and has already conducted aggressive operations to manipulate the public in the United States and elsewhere,” he said. “Nonetheless, many of us were surprised to see such bold and aggressive action on the part of Iran.”