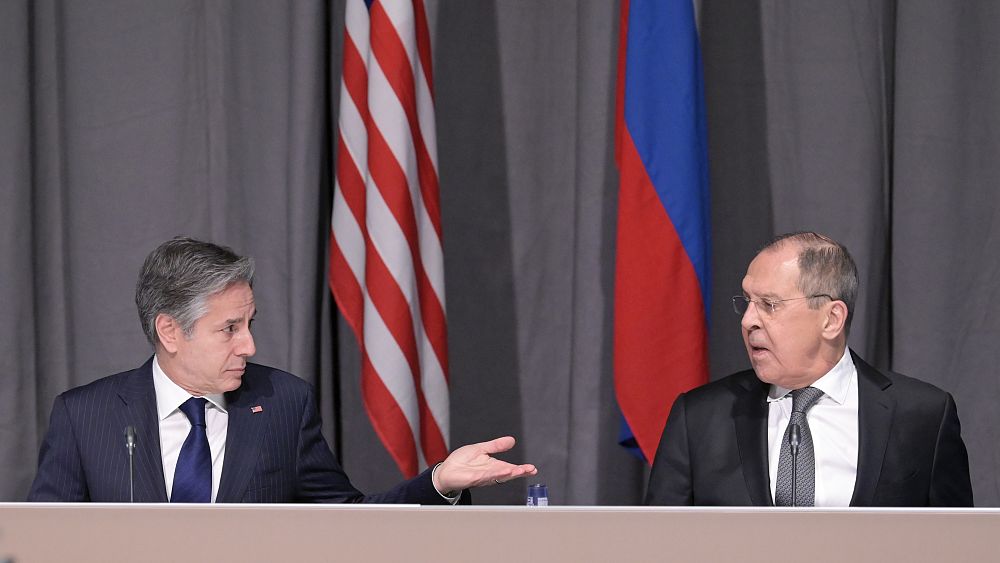 The United States issued a strong warning to Russia on Thursday, calling on it to stay away from Ukraine.

US Secretary of State Antony Blinken spoke with Russian Foreign Minister Sergey Lavrov at an OSCE meeting in Stockholm, where he warned of the “serious consequences” if Moscow decides to prosecute the confrontation.

Ukrainian and Western officials fear that an accumulation of Russian troops near Ukraine could herald an invasion.

“We don’t know President Putin’s intention. We don’t know if he made the decision to take further aggressive action against Ukraine, but what we do know is that he is building the capacity to do so and to do it in the short term. ” Blinken told Euronews after his meeting, adding that concern was widespread among European partners.

“What is most important for Russia to understand is that actions have consequences. These consequences are real. They are not in Russia’s interest, and having a conflict is only in the nobody’s interest, “he continued.

President Biden, Blinken said, had told President Putin that the United States wanted a “stable and predictable relationship with Russia,” but if Moscow acted “aggressively against Ukraine again” it would go into ” exactly the opposite direction ”.

“I don’t think it’s good for any of us, but the president has been equally clear if Russia chooses to act recklessly, we will respond.”

Pressed on what such action might entail given that the sanctions were already in place, Blinken declined to be specific, but said “a lot of things” were being considered that would “have a very high impact, and these are things that we have not done in the past that we have refrained from doing “.

But Moscow insisted it had no intention of attacking Ukraine, accusing Kiev and its Western backers of pretending to cover up their own supposedly aggressive designs.

“I have no doubt that the only way out of the current crisis (in relations), and it is really quite tense, is to find a balance of interests,” Lavrov said, as he met Blinken on the sidelines of a ministerial meeting of the Organization for Security and Cooperation in Europe in the Swedish capital.

“Regarding the rising tensions in Europe that everyone is talking about, partly along the border between Russia and Ukraine, you are well aware of our position on this. As President Putin has pointed out, we do not want conflicts.

Vladimir Putin has warned NATO against deploying its troops and weapons in Ukraine, saying this represents a red line for Russia and would trigger a firm response.

He said on Wednesday that Moscow would seek Western guarantees preventing further NATO expansion and the deployment of its weapons near Russia’s borders.

The 2015 Minsk Accord provided for an OSCE-controlled ceasefire, a withdrawal of heavy weapons and foreign fighters from the line of contact, and an exchange of prisoners of war. He was also considering granting broad autonomy to breakaway regions and a radical amnesty for the rebels in a diplomatic coup for Russia.

The agreement stipulated that Ukraine could regain control of the border with Russia in rebel areas only after it obtained broad autonomy and held elections, a disposition also felt by many in Ukraine.

Moscow says it is not a party to the deal between Ukraine and the self-proclaimed breakaway regions and denies Ukrainian and Western claims to send its troops and weapons to eastern Ukraine.