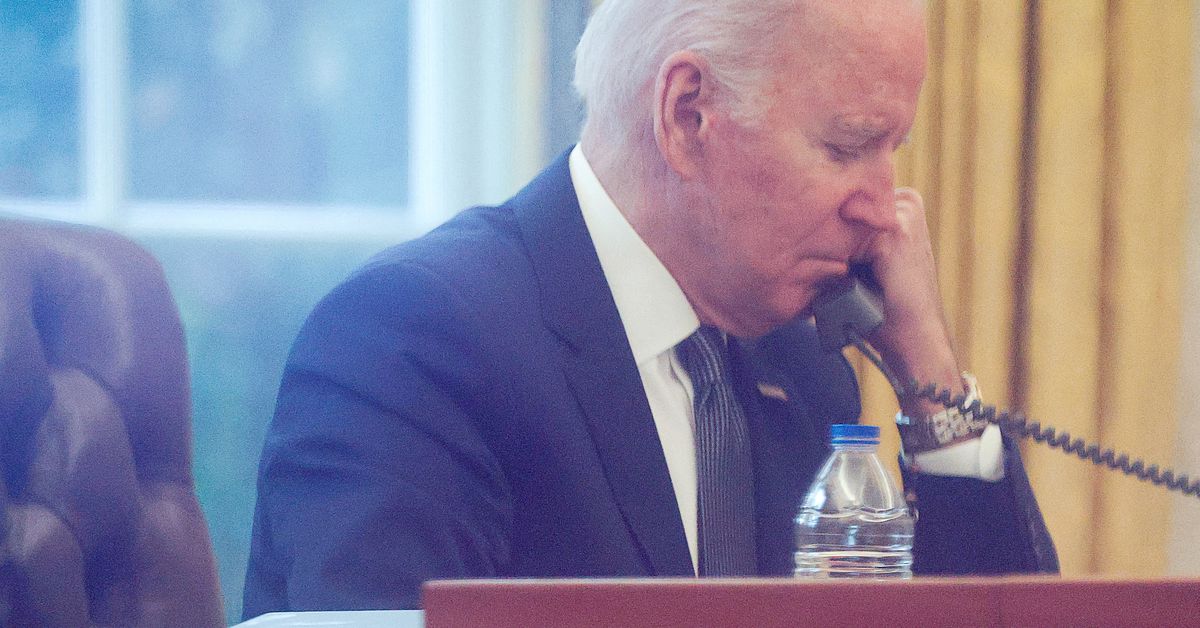 U.S. President Joe Biden is seen through an Oval Office window as he speaks by phone with Ukrainian President Volodymyr Zelenskiy at the White House in Washington, U.S., December 9, 2021. REUTERS/Leah Millis/ File Photo

WASHINGTON, Jan 14 (Reuters) – A week of diplomacy by U.S. President Joe Biden failed to defuse tensions between Russia and Ukraine, but maintained unity with European allies against Moscow as the Russian President Vladimir Putin is seeking to expose the cracks, according to foreign policy analysts.

After former US President Donald Trump openly disparaged NATO and let Europe question Washington’s commitment to the alliance, some analysts said Putin appeared to be testing Biden’s claim that “the America is back” on the world stage.

“He’s probably counting on divisions in the West,” former US diplomat Daniel Fried, who worked on the response to Russia’s 2014 takeover of Crimea, said of Putin. things could get worse. But if we gave in (this week) it would be much worse.”

Russia did not walk away from meetings with the United States and European nations this week, but talks ended with US officials warning that the risk of a Russian invasion of Ukraine remains high with no signs that Moscow will return some 100,000 troops near the Ukrainian border. at their barracks.

Russia denies plans to attack Ukraine, but says it could take unspecified military action unless its demands – including a promise from the NATO alliance never to admit the Ukraine – are satisfied.

“There has been a systematic underestimation (in Washington) of Russia’s ability to disrupt things,” said Tom Schwartz, professor of history, political science and European studies at Vanderbilt University.

But Putin has flexed his muscles, moving troops and military equipment near the Russia-Ukraine border over the past year and prompting more US diplomacy with Moscow.

Putin would not allow himself to be “deprioritized” by Washington, Schwartz said, adding that the Russian leader was trying to demonstrate that “the US-led international order is really quite fragile now. It’s a trying moment.”

Biden’s attempt to rebuild American leadership around the world was also hampered by a chaotic withdrawal of American troops from Afghanistan in August, which prompted the European Union to consider ways to become more independent of the American military.

‘ALL IN THIS TOGETHER’

Asked if the Biden administration is facing some sort of Trump hangover among NATO allies, a senior US official, speaking on condition of anonymity, said he doesn’t. There was no “lack of unity or trust between the NATO allies”.

Biden has faced lingering doubts about America’s reliability as a partner. The leaders of the advanced economies of the Group of Seven, NATO and the European Union are worried about the new swing in American policy.

During his tenure, Trump threatened to withdraw from NATO and accused the Europeans of contributing too little to their defense.

Although Biden has pledged to continue providing military aid to Ukraine and to build support in the event of a Russian invasion, Washington’s response has been almost entirely diplomatic and the West is unable to defend Ukraine militarily.

The main attempt to deter a Russian invasion is a US threat of “unprecedented” sanctions, including export controls and measures targeting the Russian financial system.

US officials have spent weeks trying to ensure that Europe would match Washington’s planned sanctions response, but no clear agreement has been reached on the specific sanctions that will be imposed.

As the European Union imposed sanctions on Russia over its 2014 annexation of Crimea from Ukraine, the bloc has shown divisions over how to deal with Moscow, which accounts for a third of the country’s gas imports. EU.

The United States has said that Moscow’s behavior towards Ukraine will play a crucial role in the fate of the Nord Stream 2 gas pipeline, intended to transport natural gas from Russia to Germany. But Germany warned on Thursday against linking the pipeline to Russian tensions.

“I think the Europeans would be united behind serious sanctions in the event of a full-scale Russian invasion,” said Anatol Lieven, senior fellow at the Quincy Institute for Responsible Statecraft.

“If it’s anything less (an invasion) – you have to remember that America doesn’t depend on Russia for gas, Europe does,” Lieven said.

COVID-19: 10-day quarantine is not enough for everyone, the study suggests