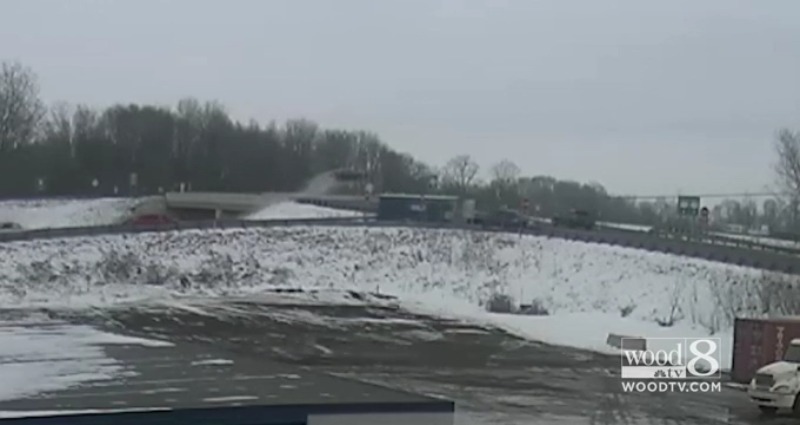 DORR TOWNSHIP, Mich. (WOOD) It was an amazing sight along US-131 near Dorr Thursday as a car soared through the air over an overpass.

“As I was coming out of the stop sign, I heard a loud thump, and I happened to look up to my left and saw the car fly over the bridge on the other side of the road. road,” witness Mike Rodriguez said.

It happened just after 2 p.m. on the south side of the freeway at 142nd Avenue in Dorr Township. A nearby company’s surveillance camera captured footage of the car in flight.

Witnesses told News 8 they saw the car drive off the road. From there, Michigan State Police said, he traveled up the dirt embankment to the exit ramp, flew over the overpass, hit a traffic sign and landed on the other side between the freeway and the access ramp. He ended up on the side.

“It was very lucky that the trailer in front of me went right instead of left because if it had gone left it would have definitely hit it,” Rodriguez said.

The driver, according to witnesses, crawled out the rear window. He had a deep cut to his head but appeared to be alert. They did not see any other injuries. MSP said the driver’s injuries are not considered life-threatening.

“How he walked away from this…and survived it.” I mean, someone was definitely watching over him,” Rodriguez said.

Witnesses initially feared there was a child in the car as they spotted a car seat in the back. But the driver quickly assured them that no one else was in the car at the time.

“It was a scary moment there,” Rodriguez said.

The driver is the only person injured in the incident.

The scene after a car took off and then crashed alongside US-131 near Dorr on Jan. 13, 2022. (Courtesy Mike Rodriguez)

When News 8 found the car on Friday, the rear driver’s side was crushed and the rear window was missing. The front passenger side appears to have been ripped off.

MSP said the driver, a 25-year-old man from Kalamazoo, appeared to be drinking. He was taken to hospital for a medical examination and for a blood test to determine if he was over the legal limit. MSP said it was seeking drunk driving charges.

“Drunk driving is still dangerous/illegal!” MSP tweeted on Friday. “Put down the keys or get a #DesignatedDriver.”

News 8 is not using the pilot’s name because he has not yet been formally charged.

State police records show he has a history of drug abuse and previous convictions for drunk driving, a drug offense and a flight from police. His driving record shows two previous accidents, including one in which he was cited for leaving the scene of an injury accident.

His license was suspended in March 2021.

~Susan Samples of News 8 contributed to this report.

Gogglebox star returns to UK after abruptly leaving the show