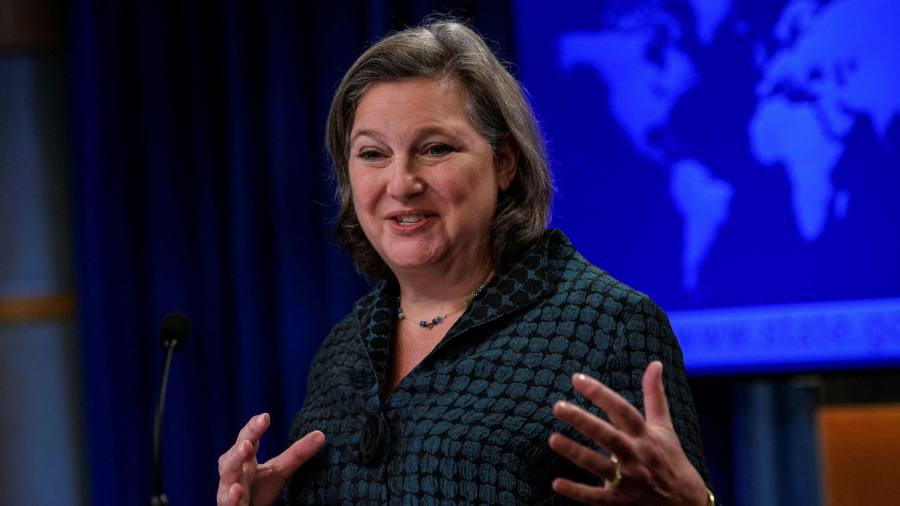 A senior US official said a large-scale cyberattack on Ukraine on Friday was “a tried and true part of Russia’s playbook”, as Washington stepped up warnings that Moscow was setting the stage for a possible invasion of its neighbour.

In an interview with the Financial Times, Victoria Nuland, the US undersecretary of state for political affairs, refrained from blaming Russia for the cyberattack, which targeted dozens of Ukrainian government websites. But she said the episode was part of a familiar and ominous pattern of Moscow actions.

“I’m not ready to share anything about the attribution at this time. I would just say that it’s a proven part of the Russian playbook, as you know, all over the world,” Nuland said. .

“In the past, Russian agents have done this to destabilize governments, to test their own abilities, to undermine the sense of trust of governments they have problems with. So anything is possible here,” she added.

Nuland’s comments came on a day when the White House stepped up its warnings that Russia was preparing for a military offensive in Ukraine. These included a claim that Moscow was seeking to create a pretext for war by positioning operatives in eastern Ukraine to conduct a “false flag operation” that would carry out “acts of sabotage against its own proxy forces.” of Russia”.

The allegations came at the end of a week of talks between the United States, NATO and Russian officials to defuse the crisis, which were dismissed as ‘unsuccessful’ by Moscow, raising fears that an invasion could be now more likely.

The United States has said that if Russia attacks Ukraine, it will face massive retaliation from the United States and its allies in Europe, including far greater economic and financial sanctions than during the attack. annexation of Crimea by Moscow in 2014.

Biden administration officials have said the United States is already prepared to deploy these sanctions if necessary, and that their scope will depend on the nature of Russian aggression.

“I’m not going to preview 18 different scenarios. . . I would just say that our engagement and the conversation we have with our allies is to inflict very severe pain very quickly, if Russia makes that decision in any form,” Nuland said.

However, she added that from the American perspective, the door to a diplomatic solution was still open and that Washington was working on written responses to Russian officials.

“We want to keep talking,” Nuland said. “We think it has to be done on the basis of reciprocity – that is, they are going to have grievances, but we also have concerns.”

The United States has so far offered to discuss arms control and limits on military exercises in the region, but has rejected Russian demands to withdraw troops from certain countries or ban them from joining the alliance. NATO.

“We think we can defuse and we can make progress on some of these things through diplomacy,” Nuland said. “We hope and expect that with some of the ideas we put on the table, Moscow will stay at the table, but that’s Putin’s choice.”

“All we’ve done so far is listen to each other,” she added. “We haven’t started the kind of conversations that we should be having to try to reach agreements, particularly if they want these agreements to be binding. So we would need more time.

Nuland, who was a senior State Department official responsible for Europe during Barack Obama’s presidency, sought to allay concerns that some European countries would resist more aggressive sanctions due to economic and political concerns, saying that the talks with the allies were “very rich and very comprehensive”. and the United States had “a very good picture of what we can do.”

“Remember this is aggression in Europe and it changes the map of Europe. So, you know, none of us want to ask our citizens or our businesses to make sacrifices, but sometimes national and international security demands it,” she said.

Nuland said the United States, however, is trying to “understand” European countries’ exposures to sanctions, to “build this package that shares the burden as fairly as possible and that people are willing to implement.” She also suggested that US and EU sanctions measures might not be “identical”.

“Sometimes there are things Europe can do that are more difficult for us and sometimes it’s the other way around,” she said.

Oxfordshire with the most new homes in England

US accuses Russia of plotting ‘false flag’ operation in Ukraine