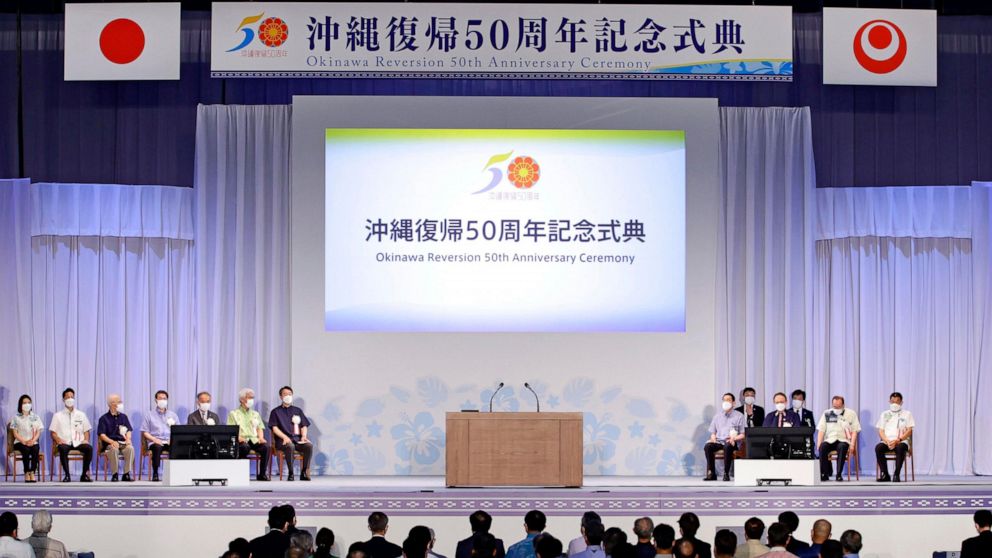 TOKYO – Okinawa Governor Denny Tamaki on Sunday urged Japan’s central government to do more to reduce the US military presence in the southern group of islands as it marked the 50th anniversary of its return to Japan after 27 years of American domination, amid frustration and bitterness over a lack of support from the continent.

Tamaki said Okinawa has come a long way since the devastation of World War II and nearly three decades of American rule, which ended when she returned to Japan on May 15, 1972. But the longstanding claim of the small group of islands for the mainland to share its security tasks remains unresolved.

The ceremonies marking the anniversary were held simultaneously in two locations, one in the Okinawa town of Giowan, home to a disputed US air station, and the other in Tokyo. The separate ceremonies symbolize the deep division of views on Okinawa’s history and the ongoing suffering.

Prime Minister Fumio Kishida said he takes Okinawa’s concerns seriously and will make efforts to reduce the burden while maintaining US military deterrence on the islands.

Kishida and his minister in charge of the islands were in Okinawa, where hundreds of protesters staged a rally on Saturday demanding a faster reduction of US military forces, amid growing fears that Okinawa could become a frontline of conflict in the amid rising tensions in China.

Other protests took place in Okinawa on Sunday, including one in the prefectural capital of Naha, where nearly 1,000 people renewed their demands for peace.

Resentment and frustration run deep in Okinawa over the heavy US presence and Tokyo’s lack of effort to negotiate with Washington to balance the security burden between mainland Japan and the southern island group.

Because of the United States. bases, Okinawa faces burdens such as noise, pollution, accidents and crime from U.S. troops, officials and Okinawans say.

The growing deployment of Japanese missile defense and amphibious capabilities on Okinawa’s outlying islands, including Ishigaki, Miyako and Yonaguni, which are close to geopolitical hotspots like Taiwan, adds to Okinawa’s fears.

Okinawa was the site of one of the bloodiest battles of World War II, which killed an estimated 200,000 people, nearly half of whom were Okinawan residents.

Okinawa was sacrificed by the Imperial Japanese Army to defend the mainland, and many Okinawans doubt the Japanese military will protect them in future conflicts, experts say.

The U.S. military maintained its troop presence on the island group for 20 years longer than most of Japan, until 1972, due to Okinawa’s strategic importance to Pacific security in deterring the Russia and communism.

Many Okinawans had hoped that returning the islands to Japan would improve the economy and the human rights situation as well as basic burdens.

Today, the majority of the 50,000 American soldiers based in Japan under a bilateral security pact and 70% of military installations are still in Okinawa, which is only 0.6% of Japanese territory. The burden increased by less than 60% in 1972 because unwanted American bases were moved from the continent.

Emperor Naruhito, in his online speech from his palace in Tokyo, acknowledged that many problems remain in Okinawa and said, “I hope people, including the younger generation, will have a better understanding of Okinawa. .

His abdicated father Akihito, devoted to atone for the scars of war fought in his father Hirohito’s name, was nearly hit by a Molotov cocktail during a 1975 visit as crown prince, but continued to show particular interest for Okinawa.

US President Joe Biden, who is due to visit Japan next week, hailed the strong US-Japan alliance and their shared values ​​and vision.

I am deeply grateful for Japan’s strong support for democracy, freedom and the rule of law and for Okinawa’s contribution to promoting these ideals, Biden said in a statement.

The biggest sticking point between Okinawa and Tokyo is the central government’s insistence that a U.S. Navy base in a crowded neighborhood, Futenma Air Station, be moved to Okinawa instead of elsewhere as demanded by many Okinawans.

Tokyo and Washington originally agreed in 1996 to shut down the station after the rape of a schoolgirl by three US servicemen in 1995 led to a massive anti-base movement.

Earlier in May, Tamaki submitted a petition to Kishida’s government and US Ambassador to Japan Rahm Emanuel demanding a significant reduction in the US military in Okinawa, the immediate closure of the Futenma base and the removal of a new base in Henoko.

Economic, educational, and social development in Okinawa lagged as Japan experienced a postwar economic surge that was aided by a decline in defense spending due to the U.S. military presence in Okinawa.

The central government’s development fund since the reversion has improved Okinawa’s infrastructure, but the growth of local industry that was largely hampered during American rule is still largely limited to tourism.

Today, Okinawa’s average household income is the lowest and its unemployment rate is the highest of Japan’s 47 prefectures. If the land taken by the US military is returned to the prefecture for another use, it would generate three times more revenue for Okinawa than the island currently earns from bases, Tamaki said recently.

Authorities in Okinawa regularly face denials from the United States in criminal and environmental investigations.

This story corrects the location of the Okinawan ceremony to Ginowan, not the prefectural capital of Naha.