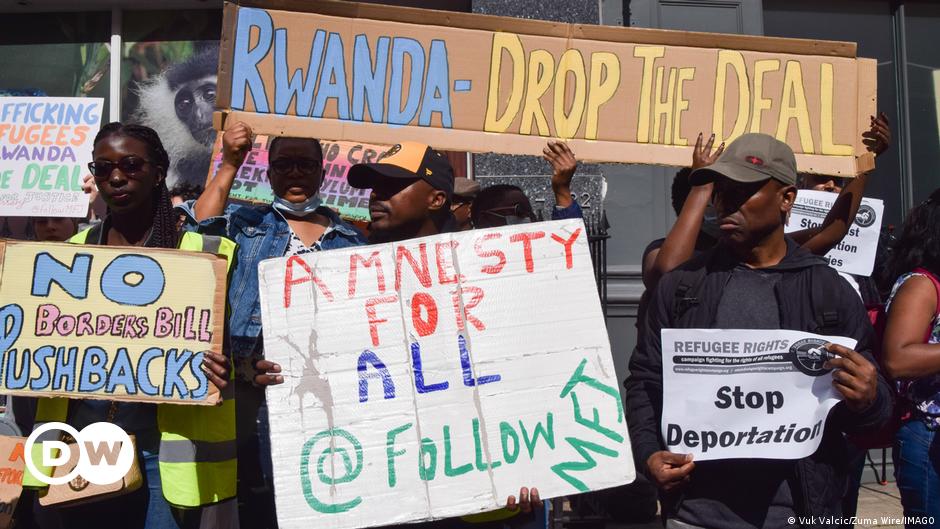 The UK’s first flight to take asylum seekers to Rwanda did not take off as planned after the European Court of Human Rights (ECHR) issued a last-minute order to halt deportation.

More than 30 migrants were originally ordered to be sent to Rwanda after two British courts on Monday refused to block deportation flights.

The court rejected a final appeal from immigration rights defenders and unions.

According to British media, the deportation of 23 asylum seekers has since been put on hold due to individual appeals. Until ECHR intervened, only a small number of migrants were expected to be deported.

London and Kigali signed an agreement in April to send asylum seekers from Britain to East African countries. The Rwandan authorities will process the asylum application, and if successful, the refugees will be able to stay in the country. The UK will support expenses of up to $157 million ($144 million).

As Rwanda accepts more migrants, the UK is expected to pay more.

“We’re doing this for the right reason,” Rwanda government spokesman Yolande Makola said at a news conference in Rwanda on Tuesday.

“I understand there may be objections, but I’m asking you to give me a chance because this program is a solution,” she added. [global] The asylum system collapsed.

“People are risking their lives at this dangerous crossroads. So you have to give something.”

The Rwanda government has said it will host asylum seekers in hostels in and around the capital Kigali.

Luis Mudge, Human Rights Watch’s director of Central Africa, said he was not concerned about Rwanda’s ability to house refugees. “The question is, is Rwanda a country that respects human, civil and political rights? The answer for us is no,” he told DW.

Human rights groups have accused the Rwandan government of cracking down on dissent, imprisoning critics and pursuing repressive policies. The government denies the allegations.

“The main purpose of this partnership is to provide legal status to people living in this country,” Doris Uwicyeza, senior technical adviser to the Rwandan Ministry of Justice, told reporters on Tuesday.

She added that migrants will have the opportunity to apply for Rwandan citizenship once they achieve legal status.

“There is a clear path to be passed on to them on how to become Rwandans.”

Not everyone believes in government

“Rwandans are known for their hospitality, but the Rwandan government does not respect human rights.” Victoire Ingabire, leader of the Rwandan anti-government movement DALFA Umurinzi, which authorities have so far refused to register as a party, told DW.

Moreover, claims that the Rwandan government wants to reintegrate African immigrants into Rwanda were skeptical.

“In that case [the migrant deal] “If it’s being done on a humanitarian basis, that’s a big deal,” Charles Ndushabandi, a Kigali resident, told DW.

Rwandan journalist John Gahamani said that given Rwanda’s history, where 800,000 people were estimated to have died in the 1994 Rwandan genocide against the Tutsi, the government would do well to help those in similar situations that many Rwandans have experienced. .

“It’s also a sign of empathy,” Gahamanyi told DW, adding, “But if people don’t want to come, there’s no reason for the government to force them to live in places they’re not comfortable with.”

“It’s good to respect their decision, because the number one reason they left the country was there,” he said.

Rwanda political analyst Gonza Muganwa points out that the agreement will naturally “get a lot of people’s attention” because a lot of money is involved.

But that’s not all. “The government doesn’t say that, but it seems clear that the government is looking for an alliance with South Korea. [British] We talked about the Conservatives and the UK as a whole,” he told The DW.

In Denmark, the right-wing government is also seeking an agreement with Kigali on the relocation of refugees.

‘Nothing to do’ for Rwandan refugees

She said the head of state should first pay more attention to the country’s fight against poverty. “These asylum seekers will have no future in Rwanda,” she told DW.

Faisal, a 20-year-old Ethiopian who has lived in the so-called transportation hub of Gashora since moving from Libya in 2019, agrees with Ingabire. “I pray to God every day to leave this place,” he added. “I had nothing to do except play soccer and drink.”

There are doubts that the agreement will deter many migrants from trying to reach the UK.

According to the government, Rwanda hosts more than 130,000 refugees and migrants from African countries and other countries such as Pakistan.

no chance to work

According to UNHCR, hundreds of people previously sent to Rwanda have since resettled in third countries.

Refugee Kelly Nimubona, who had crossed the border directly from neighboring Burundi, said there was no way to live without a job in Rwanda. She has a job,” she said.

According to the National Statistical Office, by the end of 2021, the youth unemployment rate has reached nearly 24%.

Alex Ngarambe and Konstanze Fischer contributed to this report.