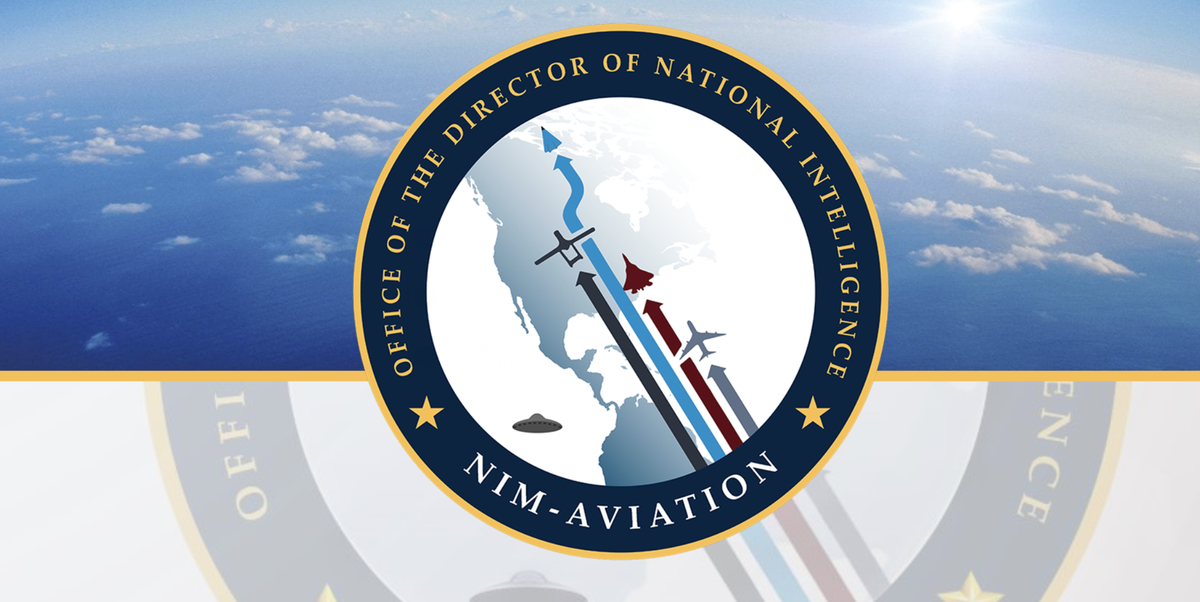 A US intelligence agency, the National Intelligence Manager for Aviation (NIM-A), recently posted an eye-catching new logo on its website that included a UFO. There also appeared to be a second, slightly different UFO ornate logo further down the webpage and used as a background image. The flying saucer was visible alongside a Russian fighter jet, drone and other planes in the logo. NIM-A was one of the government groups that last year wrote a highly anticipated UFO report.

A US intelligence agency has removed a tongue-in-cheek logo (or two) from its website after learning it included a flying saucer. Until Tuesday morning, the website of the National Intelligence Manager for Aviation (NIM-A), which advises the US intelligence chief on aviation matters, briefly featured a logo featuring a Turkish drone, a Russian fighter jet and … a UFO.

The agency has since removed the logo and barely mentioned that its jurisdiction includes all threats to aviation, presumably including possible ETs.

Don’t miss any of our best military and defense coverage. Join our team.

The logo, pictured above, depicts five aircraft flying over the Western Hemisphere. The first plane on the right is what looks like a civilian airliner. The next craft, from the right, is scarlet red and appears to be a Sukhoi Su-57 Felon, Russia’s first fifth-generation fighter. The third craft in blue looks like a hypersonic glider vehicle. The fourth craft, with a twin tail attached to the rear and a hint of a thrusting propeller behind the fuselage, resembles a Bayraktar TB-2 drone, the kind used with great success by Ukraine as it fights to eject the Russian invaders.

The fifth craft, presumably hovering somewhere over the eastern Pacific, is clearly an unidentified flying object, or what the Pentagon and the US intelligence community also refer to as Unexplained Aerial Phenomena (UAP) and more recently Aerospace Phenomena and unidentified submarines. The object looks like a classic flying saucer, presumably with portholes so the little green men can see out.

The broad and distinctive silhouette of the Su-57 fighter jet can be seen here.

The mission of NIM-As is to identify, analyze and integrate intelligence on threats and vulnerabilities in the air domain. The offices website identifies threats as terrorism (which would explain the civilian airliner), hypersonic weapons, unmanned aerial systems and presumably military aircraft threats. This wide range of threats, from terrorism to high-intensity warfare, is represented on the logo.

That leaves the UFO. The Pentagon has been paying increasing attention to potential UFOs in recent years, after encounters between naval aviators flying fighter jets and strange flying craft were reported on the east and west coasts of the United States. Navy surface ships have also reported separate encounters with drone-like UAPs off the coast of Southern California. NIM-A was also partially responsible for writing the Office of the Director of National Intelligence’s 2021 report, Preliminary Assessment: Unidentified Aerial Phenomena.

Not only that, but if you look closely you will see variations in the logos used on the old web page. The logo under the CEO’s message, the background image, and the logo at the very bottom of the page are all identical, but different from the logo used in the banner at the top of the page. Minor but noticeable differences between the logos include the UFO, the stars, and the outline of the continents.

A second, slightly different logo appeared below the message to the Executive Director on the old webpage.

The background image of the old webpage also featured the logo variation, with visible differences to the UFO, stars, and continents.

The Office of the Director of National Intelligence, which NIM-A advises on aviation threats, told The War Zone blog that NIM Aviation mistakenly released an unofficial and incorrect logo. For now, the UFO logo has been replaced by the old logo of the National Air Intelligence Integration Office, the old name of NIM-A, which changed its name in 2016. It is difficult to see how they were displayed by accident. The flying saucer is prominent and hard to miss.

The swarm of UAP sightings by military personnel over the past 12 years has been unprecedented, as far as we know. While some of the UAPs appear to be human-operated drones, others exhibit flight characteristics that appear to contravene existing aerial technology, including drones.

The official inclusion of a flying saucer on a government agency’s logo may have gone a long way to calming the laugh factor often involved in UFO sighting investigations, or it may have added to it.

Writer on defense and security issues, lives in San Francisco.