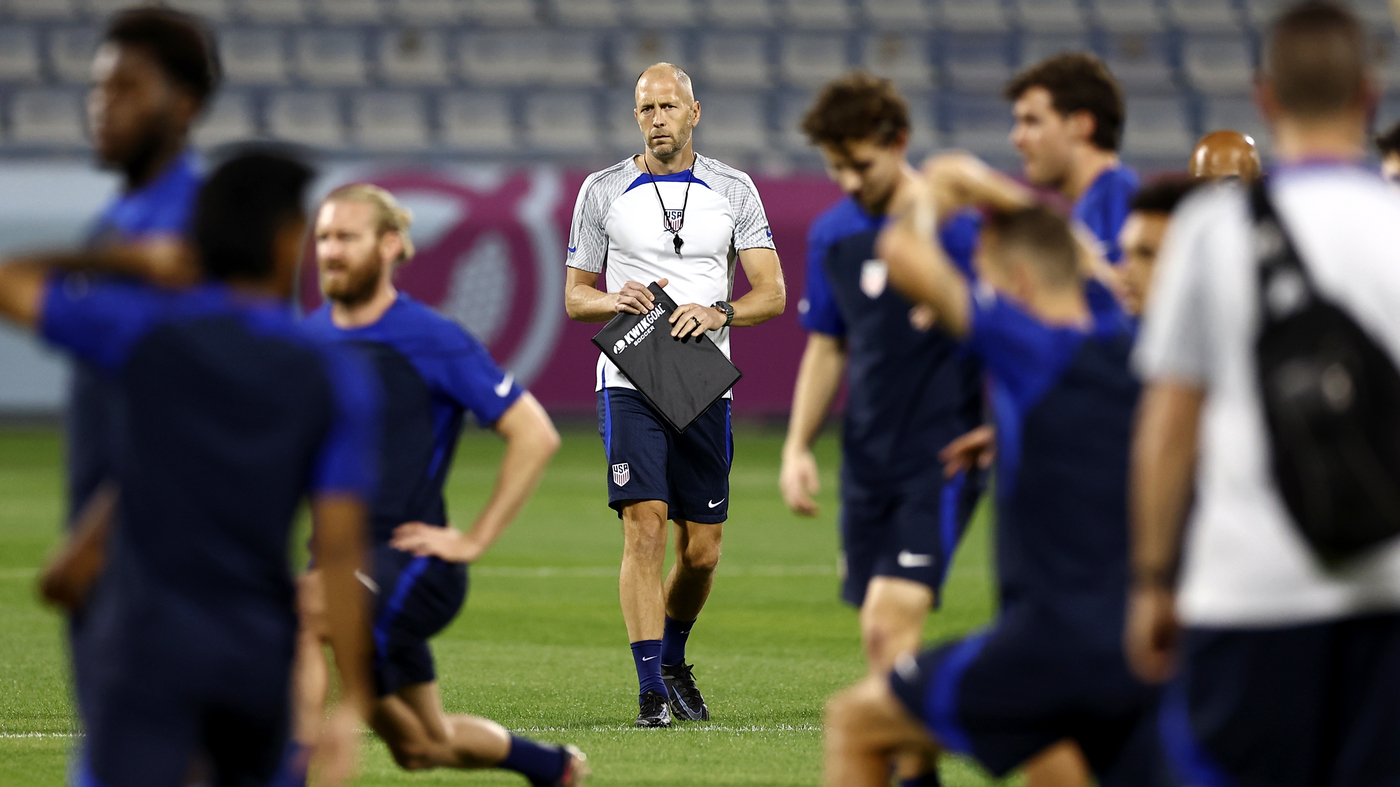 DOHA, Qatar One thing you hear over and over again here at the Qatar World Cup is how football brings the world together.

That motto is perhaps being tested the hardest at Al Thumama Stadium on Tuesday, where historic foes the United States and Iran play out a crucial match in the group stage.

How crucial? Both national teams are vying for a place in the round of 16, where the original 32 World Cup squads are halved to 16. Iran have never gone this far. The United States have done so, but consider the move to this knockout phase a must, as a way to validate the last four years spent building a men’s program after the disappointment of not qualifying for the last World Cup.

The United States must beat Iran to move forward. Four years can be summed up in one game.

“We said this team will be judged on what we do at the World Cup,” United States coach Gregg Berhalter said in Doha on Monday, “so that’s fine. We’ll deal with that. We’re focused on victory tomorrow.”

Just like Iran who can still advance with a tie, although the team is expected to hold nothing back in pursuit of a victory.

In their cocoons of team practices, meetings and meals, the goal is simple. But each time both teams ventured away, the goal of the game was challenged by an increasing number of problems away from the tournament’s pristine green football pitches.

It all started with a silent hymn

The Iran team standing on the pitch awaiting the national anthem before the game against England on November 21. The team remained silent during the anthem in a show of solidarity with the protesters. Martin Meissner/AP .

The Iran team standing on the pitch awaiting the national anthem before the game against England on November 21. The team remained silent during the anthem in a show of solidarity with the protesters.

At first, the problems were only about Iran, while the country’s recent turmoil played out symbolically at this World Cup.

It started before Iran’s first game, against England, when the Iranian players remained silent during their national anthem. New reports say that after that, the team was called to a meeting with Iran’s Revolutionary Guard Corps and told that the players’ families would be imprisoned or tortured if the players refused to sing or joined any another political demonstration against the Iranian government. Against Wales, the players sang. But in this match, Iran’s national issues began to play out more controversially among Iranian fans. Players’ euphoria on the pitch after beating Wales 2-0 shared the spotlight with ugly confrontations between fans backing the protest movement at home and fans backing the Iranian government which has cracked down on protesters.

One of the hot spots in these clashes was over the flags. Some of the protest movement’s supporters waved, or tried to wave, Iran’s pre-revolutionary flags. Government supporters, with the help of Qatari security, confiscated these flags, reportedly tore down some of them, and waved the flags of the present Islamic Republic of Iran.

The flag controversy became even more acute when the United States entered the fray.

Be the Change unleashes a firestorm

In the run-up to this World Cup, the United States Soccer Federation has spoken frequently about a mission statement it created in the wake of the police killing of George Floyd, a statement, Be the Change, which has promoted an awareness and commitment to speaking out about social injustices in the United States and around the world.

Last weekend, US Soccer spoke. And unleashed a political storm.

The idea was to post images on social media of the Iranian flag cleaned of its Islamic emblem and its language saying “God is great”. It was a way for the American federation to show “its support for women in Iran who fight for basic human rights”.

The action drew support, but also anger and calls for the US team, which had no prior knowledge of the federation’s plan, to be kicked out of the World Cup.

Depictions of the doctored flags have been removed from social media and the normal Iranian flag has been restored. The federation said the withdrawal was not due to pressure, but rather because “we wanted to show our support for women in Iran with our graphic for 24 hours.”

They might have wanted the show of support to be short-lived, but with tensions already high, controversy followed both teams until Monday’s pre-match press conferences.

Trying to orientate towards football

USA coach Gregg Berhalter and team captain Tyler Adams give a press conference at the Qatar National Convention Center in Doha on Monday ahead of the match between USA and Iran. Patrick T. Fallon/AFP via Getty Images .

USA coach Gregg Berhalter and team captain Tyler Adams give a press conference at the Qatar National Convention Center in Doha on Monday ahead of the match between USA and Iran.

Despite apologizing on behalf of the players and the team, Berhalter has repeatedly said that he and the team were not given advance notice or involved in the federation’s plan to traffic the Iranian flag.

“We had no idea what US Soccer was offering,” Berhalter said, adding, “Of course our thoughts are with the people of Iran, the whole country, the whole team, everyone. But we are focused on this game.”

Still, questions came up, going beyond the flags.

One of the most controversial moments came when an Iranian journalist berated U.S. team captain Tyler Adams for mistakenly saying “eye-ran” rather than “ih-rahn”. The 23-year-old, who is black, apologized for the mispronunciation, then thoughtfully answered a question about whether he was “okay to represent [the U.S.]who has so much discrimination against black people? »

“There’s discrimination everywhere you go,” said Adams, whose mother is white and grew up in a white family. “So I had a bit of different cultures and I was very easily able to assimilate into different cultures. You know, not everyone has that facility and the ability to do that. And obviously it takes more time to understand. And through education, I think that’s super important. Like, you just educated me now in your country’s pronunciation. So, yeah, it’s a process. I think that as long as you see progress, that’s the most important thing.

Iran coach Carlos Queiroz leads a training session in Doha on Monday. Iran can level the United States and keep moving forward, but they are expected to hold nothing back in the pursuit of a win. Fadel Senna/AFP via Getty Images .

Iran coach Carlos Queiroz leads a training session in Doha on Monday. Iran can level the United States and keep moving forward, but they are expected to hold nothing back in the pursuit of a win.

Even football issues had a political tinge.

During the Iranian team’s press conference, a British journalist asked coach Carlos Queiroz if he would use the flag controversy to motivate his players.

“If after 42 years in this game as a coach,” Queiroz said, “I still believe I could win games with these mental games, I think I haven’t learned anything about the game.”

Rather than mental games, Adams expects Queiroz to repeat the aggressive, physical style of play Iran played in their last game, an impressive 2-0 win over Wales.

“It showed in the mentality of the group. They were attacking, counter-attacking, doing whatever they had to do,” Adams said. “Every moment of the game felt like their moment to score a goal.”

Both teams, Adams said, are treating this as a knockout game, where only the winner moves on. In fact, Iran can equalize and keep going.

As for American tactics, Berhalter praised his side’s defense, particularly in holding England scoreless in a 0-0 draw on Friday. Berhalter has heard criticism that his side need to find a way to score. USA have only one goal in the tournament, but he said the answer was not to change personnel among his attacking-minded forwards.

“I think they did a decent job for us,” Berhalter said. “It’s up to the rest of the group to give them quality [passes] that they can complete some of these opportunities. We defended very well and that keeps you in the games. And then we know that in this game we’re going to have to score a goal, it’s going to have to happen. So we stay calm, we have a plan, and we’re going to go out and try to execute that plan.”

But what about those who watch?