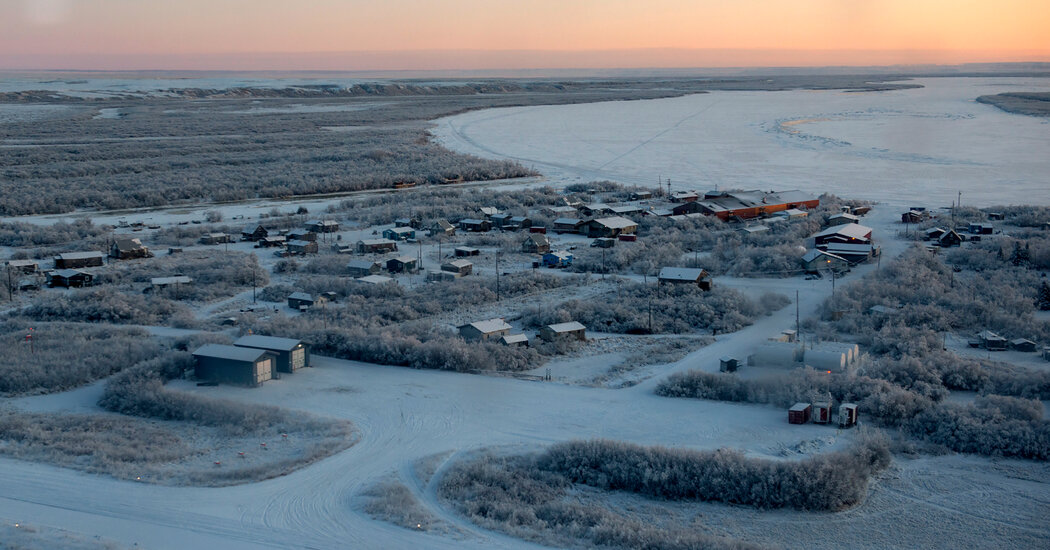 WASHINGTON The Biden administration will give three indigenous tribes $75 million to move away from coastal areas or rivers, one of the nation’s largest efforts yet to relocate communities facing an urgent threat from climate change .

The three communities, two in Alaska and one in Washington state, will each receive $25 million to move their key buildings to higher ground and away from rising waters, in hopes that homes will follow. The federal government will give eight other tribes $5 million each to plan their relocation.

It gave me goosebumps when I found out we got that money, said Joseph John Jr., council member of Newtok, a village in southwest Alaska where the land is eroding. rapidly. He will receive $25 million to move inland. It will mean a lot to us.

The project, funded by the Department of the Interior, is a recognition that a growing number of places in the United States can no longer be shielded from the changes brought about by a warming planet. The spending is intended to create a plan for the federal government to help other communities, Indigenous and non-tribal, move away from vulnerable areas, officials said.

Some tribal communities are at risk of being swept away, President Biden said Wednesday afternoon at a gathering of tribal leaders. The new funding, he said, will help tribes move, in some cases, their entire communities to safer ground.

The relocation of entire communities, sometimes called managed retreat, is perhaps the most aggressive form of adaptation to climate change. Despite the high initial cost, relocation can save money in the long run by reducing the amount of damage caused by future disasters, as well as the cost of rebuilding after those disasters.

But offshoring is also disruptive. In 2016, the Obama administration gave Louisiana $48 million to relocate the small coastal village of Jean Charles Island, which lost most of its land to the Gulf of Mexico. The residents struggled to agree on where the new village should be built; it was only this year that people started moving into their new homes.

Another challenge is deciding which places to help first. This year, the Bureau of Indian Affairs held a competition in which tribal nations requested up to $3 million in resettlement money. Of the 11 tribes that applied, only five received funding; the office would not say how it decided which tribes to help relocate.

The $25 million announced Wednesday, which will fund a significant portion of the cost of the relocation, followed a more opaque process. According to officials, there was no application process. Instead, the Bureau of Indian Affairs considered tribes that had already done some degree of planning for resettlement and applied five criteria, including the level of risk they currently faced, if they had selected new sites to move to and their willingness to move.

Some experts have expressed concern about how the Home Office decided which tribes to help relocate.

The lack of a formal application process for the latest relocation grants strikes me as an unfair way to make funding decisions with such far-reaching implications, said Samantha L. Montano, professor of emergency management at Massachusetts Maritime. Academy.

Every community faces some kind of climate risk and will need federal support to mitigate that risk, Dr. Montano added. There is no clear plan for how these funding decisions will be made effectively, efficiently or equitably.

In addition to Newtok, the other tribes that received $25 million were Napakiak, a village on the banks of the Kuskokwim River that loses 25 to 50 feet of land each year to erosion, and the Quinault Indian Nation, on the Olympic Peninsula in Washington States, whose main city, Taholah, faces an increasing risk of flooding.

The Quinault Nation has chosen a new site on higher ground, said Fawn Sharp, the nation’s vice president. She said the new money will be used to build a community center, which will also house a health and wellness center and be the site of general council meetings. The structure will also serve as an emergency evacuation center.

The $25 million will represent about a quarter of the total cost of the Quinault resettlement project, said Sharp, who is also president of the National Congress of American Indians.

For years, our pleas seemed to fall on deaf ears, Ms Sharp said. With the new money, she says, they pay attention to us.

Eight other tribes will receive $5 million each to consider relocating and to begin planning their relocation if they decide to do so. They include the Chitimacha tribe, in Louisiana; the Yurok Tribe in Northern California; and other native villages in Alaska.

The federal government must learn to help relocate communities that want to relocate, said Bryan Newland, assistant secretary for Indian affairs at the Department of the Interior. The new funding will be a chance for the Bureau of Indian Affairs to learn how to coordinate its relocation efforts with other agencies working on disaster recovery, including the Federal Emergency Management Agency.

Due to the impact of climate change, it is unfortunate that this work is necessary, said Mr Newland, who is a citizen of the Bay Mills Indian community. We must ensure that the tribes can continue to exist and continue their way of life.

US believes protests in China will not spread for now

US economic growth was stronger than expected in the third quarter