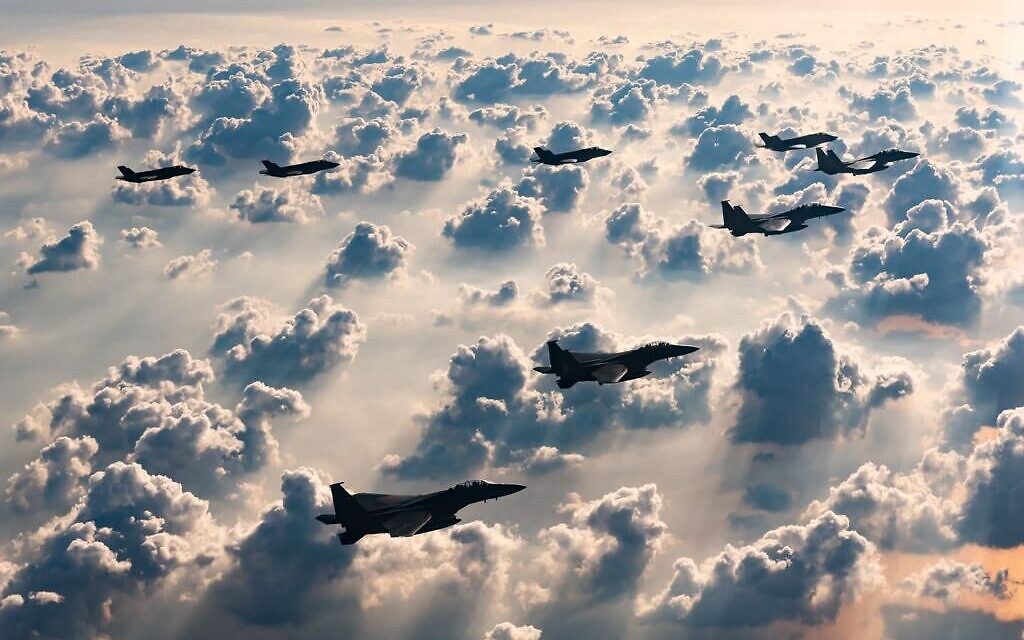 The Israel Defense Forces on Wednesday released images and details of a series of joint aerial exercises it held with the US military this week, simulating strikes against Iran and its regional terror proxies.

The IDF said the drills “also simulated an operational scenario and long-distance flights.”

“The Intelligence Directorate conducted an extensive simulation that replicated a campaign against distant countries,” the IDF said, apparently referring to Iran. “This exercise tested the IDF’s abilities to gather intelligence, search and define targets, and make intelligence available to operational forces.”

“These exercises are a key part of the two armies’ strategic cooperation in response to common concerns in the Middle East, particularly those posed by Iran,” the IDF added.

Prime Minister Yair Lapid observed part of the exercise on Wednesday from the IAF’s underground control centre, his office said in a statement.

“Strategic cooperation with the United States and other countries strengthens the IDF’s capabilities in dealing with challenges in the Middle East, primarily Iran,” Lapid said. “We have partners in the sky and on the ground, but we also have the right to do as we see fit and to defend the State of Israel.”

The joint exercise was agreed upon during IDF chief Aviv Kohavi’s trip to the United States last week.

The IDF said Kohavi told US defense officials in Washington that the two armies should accelerate joint plans for offensive actions against Iran.

Last Thursday, he said joint activities with the US military in the Middle East would be “significantly expanded”.

“In order to improve our capabilities in the face of challenges in the region, joint activity with the US Central Command will be significantly expanded in the near future,” Kohavi said in remarks provided by the IDF after returning to Israel from the trip.

“At the same time, the IDF will continue to act at an accelerated pace against the entrenchment of the Iranian regime in the region,” he added.

Kohavi held meetings with senior US officials for five days, focusing on the Iranian threat.

“During discussions, it was agreed that we are at a critical juncture that requires the acceleration of operational plans and cooperation against Iran and its terrorist proxies in the region,” he said last week. .

Jerusalem opposes attempts by US President Joe Bidens to revive a nuclear deal between Tehran and world powers that have traded sanctions relief for curbs on the Islamic republics’ nuclear program.

But that disagreement has been less relevant lately, as nuclear talks collapsed and the United States chose to focus on responding to ongoing protests in Iran against the regime.

Israel has pushed for the United States to prepare military contingency plans to prevent Iran from obtaining nuclear weapons. Biden has said he is prepared to use military force if necessary, but always prefers to exhaust the diplomatic channel first.

In light of growing uncertainty over an Iranian return to the deal, the past two years have seen the IDF intensify its efforts to prepare a credible military threat against Tehran’s nuclear sites.

While Iran has long maintained that its program is peaceful, non-proliferation experts warn that Tehran has enough 60% enriched uranium to reprocess it into fuel for at least one nuclear bomb.

Israeli officials have also warned of Iran’s proxies across the region, from Hezbollah in Lebanon to the Houthis in Yemen, as well as other Syria-based groups.

The official visit to Washington was Kohavis’ last scheduled as chief of staff, with his term set to end Jan. 17.

I joined The Times of Israel after many years covering US and Israeli politics for Hebrew language news outlets.

I believe responsible coverage of Israeli politicians means presenting a 360-degree view of their words and deeds, not only conveying what is happening, but also what it means in the broader context of Israeli society and of the region.

It’s hard to do because you can rarely take politicians at face value, you have to go the extra mile to present full context and try to overcome your own biases.

I am proud of our work which tells the story of Israeli politics in a direct and comprehensive way. I believe that Israel is stronger and more democratic when professional journalists do this difficult job well.

Your support for our work by joining the Times of Israel community allows us to continue to do so.

We’re really glad you’ve read the X Times of Israel articles over the past month.

So now we have a request. Unlike other media, we don’t have a paywall in place. But because the journalism we do is expensive, we invite readers to whom The Times of Israel has become important to help support our work by joining The Times of Israel community.

Thank you, David Horovitz, founding editor of The Times of Israel