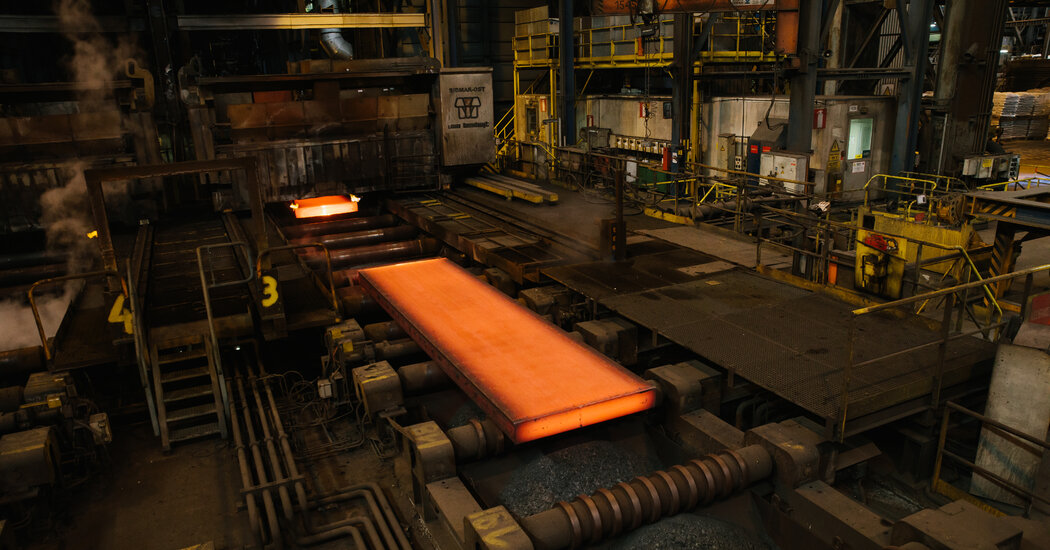 WASHINGTON The Biden administration on Wednesday sent a proposal to the European Union suggesting the creation of an international consortium that would promote trade in metals produced with lower carbon emissions, while imposing tariffs on steel and aluminum from China and elsewhere, according to a copy seen by The New York Times.

The document, a concept paper written by the Office of the U.S. Trade Representative, provides the first concrete outline of a new type of trade deal that the Biden administration sees as a cornerstone of its approach to trade policy.

The proposed group, known as the Global Arrangement on Sustainable Steel and Aluminum, would use the power of US and European markets to try to strengthen domestic industries in a way that also mitigates climate change. To do this, member countries would jointly impose a series of tariffs on metals produced in ways harmful to the environment.

The levies would target China and other countries that have not joined the group. Countries that join would benefit from more favorable trading conditions with each other, especially for cleaner-produced steel and aluminium.

To join the arrangement, countries would have to ensure that their steel and aluminum industries meet certain emissions standards, according to the document. Governments should also pledge not to overproduce steel and aluminum, which have depressed global metal prices, and to limit the activity of state-owned enterprises, which are often used to channel subsidies to foreign metal manufacturers. Although the concept paper does not mention China, these requirements seem likely to prevent it from becoming a member.

The United States and the European Union have been in talks on a climate-related trade deal for the steel and aluminum industries since last year. No US trade deal has ever included specific targets on carbon emissions, and negotiators have had a long way to go trying to reconcile the different economic approaches of the US and EU to mitigating change. climatic.

It’s unclear what kind of reception the proposal, which is still in its early stages, will receive from European leaders, as well as whether US industry and politicians will support the idea. An EU official declined to comment on details of an active negotiation on Wednesday, but said the two sides were discussing ways to continue and deepen their work on the arrangement.

In recent weeks, trade tensions between the United States and Europe have reached their highest level since President Biden took office, with leaders clashing over US legislation aimed at encouraging the production of electric vehicles in North America. EU leaders say the measures will disadvantage their industries and have demanded changes they say unfairly exclude European businesses.

A senior trade official, who spoke on condition of anonymity because the document was not yet public, said the row over electric vehicles was unlikely to spill over into negotiations on the steel and aluminum, and that governments were closely aligned on the goal of taking carbon intensity into account when it comes to trade.

After a meeting with European officials outside Washington this week, Katherine Tai, the U.S. Trade Representative, called the steel and aluminum effort one of the most important things being worked on. the United States and the EU in matters of trade. She said it was on track to meet a previous goal of completion by next year.

This is an important part of our record, from Washington to Brussels, in terms of taking on some of the toughest issues of our time, some of the things that have been really difficult between us, and demonstrating that we can exercise leadership with a vision for the future, Ms. Tai said at a press conference on Monday.

Valdis Dombrovskis, the EU trade commissioner, said the methods the US and Europe are developing to measure the carbon footprint of steel and aluminum could be extended to other products, in the part of a new transatlantic initiative on sustainable trade that governments had agreed to launch.

It will provide a common language to understand many things, he said.

It’s also unclear what support the plan will have from domestic steel and aluminum manufacturers. While some have expressed support for the broader strategy, company and union leaders are still reviewing the plans and say the potential impact on U.S. industry would depend on details that have yet to be determined. .

The U.S. steel industry is already among the cleanest in the world, thanks to the country’s stricter environmental standards and emphasis on recycling scrap metal. The deal is designed to capitalize on those advantages and help U.S. companies withstand competition from heavily subsidized steel and aluminum makers in China and elsewhere.

But the United States is also home to many industries that buy foreign steel and aluminum to make other products. They might object that the move would increase their costs.

If the United States and Europe go ahead with the structure, there will likely be an intense fight over where tariffs are set and how carbon emissions are measured.

The development of a method to determine the amount of greenhouse gas emissions in the production of a particular product is still in its early stages, and much more data would need to be collected at the product and company level. specific, people familiar with the said plans.

The United States and Europe have expressed interest in expanding consortia membership to any country that can meet its high standards. But the arrangement could antagonize US allies in the short term, if countries like Japan and South Korea are initially left out.

The measure could also trigger retaliation from China or be challenged at the World Trade Organization, which includes China and requires its members to treat each other equally in trade.

The concept paper proposes a tiered tariff system that would increase with the level of carbon emitted during the production of a particular steel or aluminum product. Additional customs duties would be levied on any product originating from countries outside the consortium.

The tariff rate would start at 0 for the cleanest products of member countries. Beyond that, the document does not specify the rates, but rather represents them as X, Y, or Z.

The proposal to impose tariffs on steel from China and other countries as part of the arrangement has previously been reported by Bloomberg.

The thresholds for tariff rates and for consortium membership are designed to increase over time to encourage countries to continue cleaning up their industries. The arrangement would incentivize global industry to decarbonize as a condition of market access, the document says.

Todd Tucker, director of industrial and trade policy at the Roosevelt Institute, compared the approach to a carbon tariff imposed on countries that are not part of the carbon club.

The United States and the European Union appear to be taking a more ambitious path to address global steel trade, Tucker said. This means leveraging the power of the US and European markets to drive the decarbonization of the global steel market.

Cold weather in the UK: What are the health risks and who will be most affected? | health