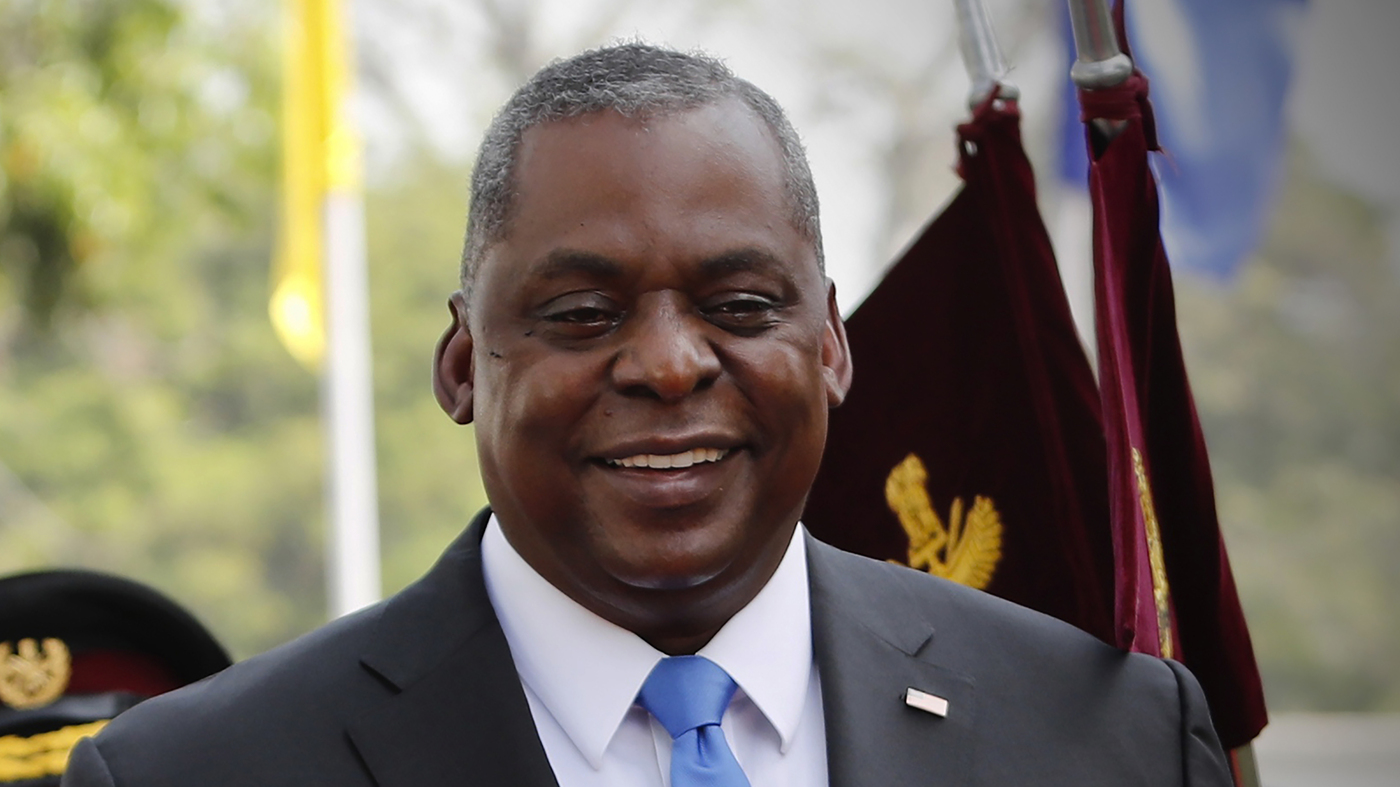 US Secretary of Defense Lloyd Austin reviews an honor guard with Indian Minister of Defense Rajnath Singh in New Delhi, India on March 20, 2021. Austin arrived in Kabul on Sunday for his maiden trip in Afghanistan as head of the Pentagon, amid swirling questions about how long troops will remain in the country. Manish Swarup / AP .

US Secretary of Defense Lloyd Austin reviews an honor guard with Indian Minister of Defense Rajnath Singh in New Delhi, India on March 20, 2021. Austin arrived in Kabul on Sunday for his maiden trip in Afghanistan as head of the Pentagon, amid swirling questions about how long troops will remain in the country.

KABUL, Afghanistan State media report that US Secretary of Defense Lloyd Austin arrived in Kabul on Sunday for his first trip to Afghanistan as Pentagon chief, amid swirling questions over how long troops Americans will remain in the country.

State Radio and Television Afghanistan and the popular TOLO Television reported Austin’s arrival in Kabul from India. He was to meet with senior Afghan government officials, including President Ashraf Ghani.

President Joe Biden said last week in an interview with ABC News that it would be “difficult” for the United States to meet the May 1 deadline for withdrawing troops from Afghanistan. But he said if the deadline, which is set in an agreement between former President Donald Trump’s administration and the Taliban, was extended, it wouldn’t be “much longer.”

In response, the Taliban warned on Friday of the consequences if the United States did not meet the deadline. Suhail Shaheen, a member of the Taliban negotiating team, told reporters that if US troops stay beyond May 1, “it will be kind of a violation of the agreement. This violation would not be on our side. .. Their violation will have a reaction. “

Austin was due to meet with Ghani as well as the new Army Chief of Staff Gen. Yasin Zia, who was appointed acting defense minister this week. Washington is reviewing the deal the Trump administration signed with the Taliban last year.

In a very specific letter to Ghani earlier this month, US Secretary of State Antony Blinken said there was an urgent need to make peace in Afghanistan, saying all options remained on the table. He also warned that the Taliban is likely to achieve rapid territorial gains if US and NATO troops withdraw. The United States spends $ 4 billion a year to support Afghanistan’s national security forces.

The Taliban warned the United States against exceeding the May 1 deadline at a press conference in Moscow the day after meeting with senior Afghan government negotiators and international observers to try to revive a stalled peace process to end decades of war in Afghanistan.

Washington also handed the Taliban and the Afghan government an eight-page peace proposal that the two sides are reviewing. He calls for a so-called interim “peace government” that would guide Afghanistan towards constitutional reform and elections.

Ghani resisted an interim administration, prompting critics to accuse him of clinging to power. He says that elections alone would be acceptable to bring about a change of government.

The United States and Kabul have both called for a reduction in violence leading to a ceasefire. The Taliban say a ceasefire would be part of the peace negotiations, but the insurgent movement has not attacked US or NATO troops since the agreement was signed.

However, US military commanders and NATO leaders have argued that the Taliban have failed to live up to their part of the peace deal, which includes a reduction in violence and a separation of Al-Qaida and d other terrorist groups.

NATO Secretary General Jens Stoltenberg said last month that the alliance “will only leave when the time is right” and when the conditions are right.

Austin has said little publicly about the current impasse. After a virtual meeting of NATO defense ministers, Austin told reporters that “our presence in Afghanistan is conditional and the Taliban must honor their commitments.”

Austin’s stop in Afghanistan marks his first return to an American war zone in the Middle East since taking up his post at the Pentagon. But he spent a lot of time in the area during his service as the army commander. Austin, a retired four-star general, served in Afghanistan as the commander of the 10th Mountain Division. And from 2013 to 2016, he was the head of the US Central Command, which oversees the wars in Iraq and Afghanistan.

The visit to Afghanistan comes at the end of his first overseas trip as Austin’s secretary. After a stopover in Hawaii, he traveled to Japan and South Korea, where he and Secretary of State Blinkin met their defense and foreign ministers.

LOS ANGELES, CA / ACCESSWIRE / June 24, 2020, / Compare-autoinsurance.Org has launched a new blog post that presents the main benefits of comparing multiple car insurance quotes. For more info and free online quotes, please visit https://compare-autoinsurance.Org/the-advantages-of-comparing-prices-with-car-insurance-quotes-online/ The modern society has numerous technological advantages. One important advantage is the speed at which information is sent and received. With the help of the internet, the shopping habits of many persons have drastically changed. The car insurance industry hasn't remained untouched by these changes. On the internet, drivers can compare insurance prices and find out which sellers have the best offers. View photos The advantages of comparing online car insurance quotes are the following: Online quotes can be obtained from anywhere and at any time. Unlike physical insurance agencies, websites don't have a specific schedule and they are available at any time. Drivers that have busy working schedules, can compare quotes from anywhere and at any time, even at midnight. Multiple choices. Almost all insurance providers, no matter if they are well-known brands or just local insurers, have an online presence. Online quotes will allow policyholders the chance to discover multiple insurance companies and check their prices. Drivers are no longer required to get quotes from just a few known insurance companies. Also, local and regional insurers can provide lower insurance rates for the same services. Accurate insurance estimates. Online quotes can only be accurate if the customers provide accurate and real info about their car models and driving history. Lying about past driving incidents can make the price estimates to be lower, but when dealing with an insurance company lying to them is useless. Usually, insurance companies will do research about a potential customer before granting him coverage. Online quotes can be sorted easily. Although drivers are recommended to not choose a policy just based on its price, drivers can easily sort quotes by insurance price. Using brokerage websites will allow drivers to get quotes from multiple insurers, thus making the comparison faster and easier. For additional info, money-saving tips, and free car insurance quotes, visit https://compare-autoinsurance.Org/ Compare-autoinsurance.Org is an online provider of life, home, health, and auto insurance quotes. This website is unique because it does not simply stick to one kind of insurance provider, but brings the clients the best deals from many different online insurance carriers. In this way, clients have access to offers from multiple carriers all in one place: this website. On this site, customers have access to quotes for insurance plans from various agencies, such as local or nationwide agencies, brand names insurance companies, etc. "Online quotes can easily help drivers obtain better car insurance deals. All they have to do is to complete an online form with accurate and real info, then compare prices", said Russell Rabichev, Marketing Director of Internet Marketing Company. CONTACT: Company Name: Internet Marketing CompanyPerson for contact Name: Gurgu CPhone Number: (818) 359-3898Email: [email protected]ternetmarketingcompany.BizWebsite: https://compare-autoinsurance.Org/ SOURCE: Compare-autoinsurance.Org View source version on accesswire.Com:https://www.Accesswire.Com/595055/What-Are-The-Main-Benefits-Of-Comparing-Car-Insurance-Quotes-Online View photos

An ‘absolute plague’ of mice is ravaging eastern Australia