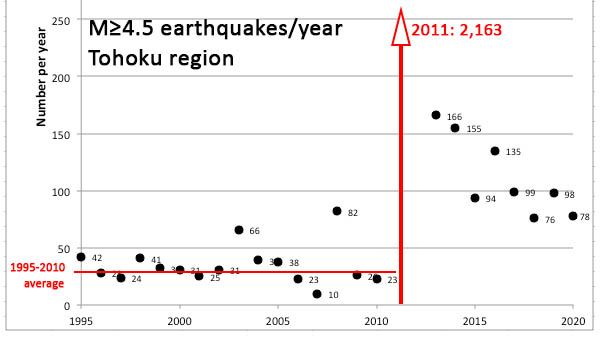 Recently, a colleague asked me, “When is an earthquake no longer considered a consequence of an earthquake?” A more blunt Facebook comment was, “Aftershock after 10 years? Impossible.” The comments came in response to seismologists’ announcement of the M7.1 earthquake last week of an aftershock for the 2011 M9.1 earthquake, I thought the same once I saw the location of the February 13th earthquake, and it was good to see experts agree with me. But from the comments and questions, it is clear that not many people believe this. How can seismologists distinguish between an aftershock and an independent earthquake?

All aftershocks are rupture earthquakes along a fault and the emission of seismic waves that can be felt if close enough. Aftershocks are quite capable of causing massive damage and death when large enough to affect populated areas, and some have caused more damage than the main shock. The only “least” thing about an aftershock is its strength compared to the largest earthquake in a sequence.

The epicenter of the Great East Japan Earthquake on March 11, 2011 was in the Tohoku region off the east coast of the most populous island of Honshu in Japan. Outside, the Japan Trench marks the edge of the subduction zone as the Pacific Plate subducts below the North American Plate. Gravitational pull causes pressure to build up and distort rocks. When the stress exceeds the strength of the rocks, earthquakes occur.

Earthquakes are common in the Tohoku region. In the decades leading up to 2011, an average of 35 earthquakes of magnitude 4.5 or greater were detected in this area each year. The region has seen much larger earthquakes in the distant past, including at least four in the low M8 range in the past two centuries. Before 2011, Japanese seismologists estimated that earthquakes in the middle of the M7 range were repeated every 35 years.

At first glance, it may seem that the high level of earthquakes makes it difficult to analyze what is a consequence and what is a new earthquake that has nothing to do with the previous one. To distinguish, it is helpful to understand how the 2011 rupture occurred.

Geologists use many tools to determine the size of the fault in a given earthquake. Japan is the most used country in the world and its dense network of seismometers, GPS stations, and other instruments not only reveal the area being torn, but also the amount of slip.

It is a bit puzzling to see how huge that earthquake is. Earthquake center maps are a poor way to visualize the magnitude of large earthquakes. The point on the map represents only the point of the surface above where the rupture began. In 2011, that point was off the coast of Miyagi Prefecture, about 60 miles east of Ishinomaki, 18 miles below the surface. This point was only the beginning. Over the next two minutes, the fissure continued to grow outward along an almost flat surface to the west and coastal communities, to the north and south and even into the trench 100 miles to the east. As the crack grew, it continued to produce new seismic waves. When the rupture finally stopped, the rocks were displaced along the rupture surface more than 300 miles long and 150 miles wide relative to one another.

Here’s where it gets complicated. Coupon is not standardized. Some spots on this fault surface slid by 150 feet, the largest slip measured in any earthquake. Other stains slid much less – only 10 to 15 feet. When the rupture finally stopped, the balance was in no way restored. Aftershocks are nature’s way of balancing the disparity in this slip distribution. It is concentrated in areas with slip irregularities.

Two things about aftershocks: They are contained within and around the main earthquake-torn region and their numbers decrease over time. There have been more than 2,000 earthquakes of magnitude 4.5 and greater in the Tohoku Fracture Zone in the year after M9.1. That number dropped to 373 in 2012, and has generally declined every year since then. Last year, the number dropped to 78. But note that 78 is still more than the double of the background before 2011.

It may take another five years for the Tohoku region to finally arrange itself back to its pre-2011 activity level. There is no time limit for aftershocks. It’s a statistical definition – as long as the number of earthquakes in a region is above the normal background and the trend is down, we call it an aftershock. The 2004 Andaman-Sumatra earthquake was just as strong, but the window of follow-up was short lived.

Just because we call the February 13th earthquake aftershock does not reduce its potential to cause damage. The earthquake was felt strongly in coastal areas of Fukushima and Miyagi prefectures, and the earthquake was felt by many in Tokyo, and by some as far away as Hokkaido and Osaka. Media reports indicate 185 injuries, including 12 cases requiring hospitalization, in addition to many items falling from shelves, minor damage to buildings and widespread power outages. When you feel an earthquake, it makes no difference if it is an aftershock or not. Just be sure to protect yourself, drop it, cover it, and hang it.

Iran says the gas network in Sisakht is stable after a 5.6-magnitude earthquake