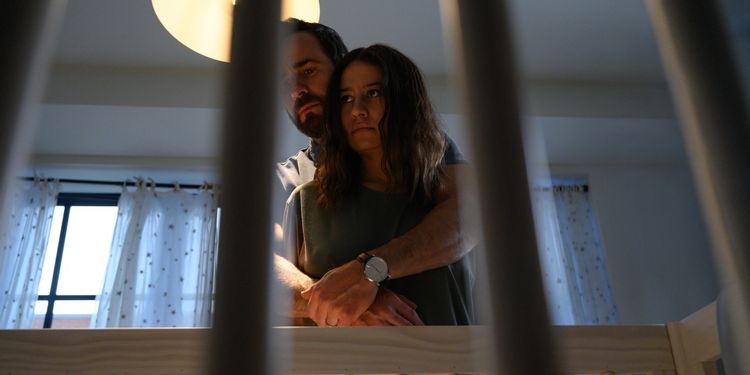 John Lee’s aimless feature isn’t dark enough to be scary, funny enough to be a comedy, or smart enough to say anything about the many topics it seems like it wants to touch on.

It’s movie math: take a pregnant woman, add a bunch of shady people, multiply by the natural anxiety that comes with bringing new life to the world, and voila, you have a “Rosemary’s Baby” riff. ! But while John Lee’s “False Positive” may have seemed – at least at first, thanks to some well-done marketing materials – like some sort of millennial version of the classic horror effort, it doesn’t work on its own merits. , much less as a rendition of the 1968 feature film. While the inevitable comparisons don’t help – and really, movies about pregnant and scared women don’t need to be automatically compared to Roman Polanski’s movie. , certainly not anymore – its own flaws are evident even without the eye-catching parallels.

Trapped in a bizarre cinematic genre hinterland, utterly resistant to veering too far in any direction, this aimless film isn’t dark enough to be scary, funny enough to be a comedy, or smart enough to say anything about the many topics it seems to cover. want to tackle.

Ambition and ideas abound in the film, written by Lee and star Ilana Glazer, who previously worked together on Glazer’s winning comedy series “Broad City.” Armed with a story originally conceived by Lee and author Alissa Nutting (from which “Made for Love” was recently adapted into series), there is clearly a dark, biting story beneath what happened onscreen. You can feel it in the opening moments of the film, which opens in media (before returning to a surprisingly thin plot), as a bloodied and shocked Lucy (Glazer) wanders the streets, emergency lights painting its neighborhood in red and blue, and a the score of Yair Elazar Glotman and Lucy Railton goes from scary to cute and vice-versa.

“False Positive” at least succeeds in making its audience feel uncomfortable, and while that sentiment doesn’t abate over its thankfully short 92-minute span, it’s less the product of shrewd cinema than countless confusing choices. Lucy and her husband Adrian (Justin Theroux) have been trying to get pregnant for two years, but despite Lucy’s overwhelming attitude (she quit drinking, for example) that doesn’t seem to make an old baby … fashioned way will unfold for them. Fortunately, Doctor Adrian knows a guy, the better really, and he can’t wait to go to the Hindle Women’s Center so that his former teacher, Dr John Hinkle (Pierce Brosnan, who seems to be at least having fun) can imbue Lucy with her new IVF method.

Lucy doesn’t like him. She’s written like a girl from the book, a true straight shooter, but while these character elements are prevalent in the script, they never seem to surface in Glazer’s actual performance. You can’t really blame Lucy for her reaction, however, because the HWC just feels weird: it’s a quirky open-plan modern office entirely made up of nurses in old-fashioned pink robes (including Gretchen Mol as Dr Hinkle’s dedicated head nurse, Dawn). There is a glaring lack of privacy even in the examination rooms, where Lucy is thrown onto a table with her lower pieces exposed and facing the door, while Dr. Hinkle (please, call him John!) even rolls up a mirror so she can check things out for herself. (There are many, many mirrors in the film, which mostly seem to respond to the dark lighting scheme of cinematographer Pawel Pogorzelski.)

Still, it’s hard to deny Dr Hinkle’s methods, as soon Lucy is very pregnant, although with this happy news comes its own complications to consider. As Lucy’s belly grows, so does her paranoia, and while it’s clear that something bizarre is going on with Dr. Hinkle and even Adrian, “False Positive” never makes the distinction. between the real and the imaginary until it is too late. Directional errors abound, from a series of weird nightmares to spooky visions of blood, but each “spooky” choice mostly fits as another cheap way to cover up a declining narrative.

Worse still: there are lots of intriguing threads to draw here, like this so-called Doctor Adrian doesn’t seem to know much about actual medicine, or the mysterious way Lucy meets a midwife (Zainab Jah) whom she begins to focus on services, and why Lucy is the two best friends are so easily dismissed in favor of the lovely Corgan (Sophia Bush). None of this will ever come back to much, and while the film offers a lot of explanations for its conclusion, most of them feel cobbled together from other films and other stories, unable to be at all satisfactory in the context of the chintzy medium proposed here.

Other choices happen in their own way, again hinting at something much smarter lurking deep beneath the surface of the film. Glazer is so recognizable as a comedic talent that it’s hard to imagine he’s not meant to be capitalized on here, and the movie’s soft jokes – including a whole subplot about how his boss (Josh Hamilton) is obsessed with the fast, casual Dig Inn – feel like the “Broad City” jets. (The Dig Inn stuff also seems to tie into another under-explored facet of Lucy’s life: She’s a rising star at work, but as the only female on staff, she is always expected to be either in charge of every lunch order.) Elsewhere, the chemistry and coziness between Glazer and Theroux never quite work out, although it’s hard to determine if that’s meant to be part of the film’s tension (good luck for a story about this odd couple) or is simply the product of regrettable casting choices.

Is “False Positive” really meant to send or riff on “Rosemary’s Baby”? Surely the world of cinema can (and should!) Contain more films about women who are not rooted in pregnancy (and how the world, especially its men, treats them while they are in such a state. “Delicate”) which are not automatically compared to a flawless classic. But even if one threw out the math of the movie and the expectations that came with it out the window, “False Positive” stands for very little on its own, subtracting anything that might make it unique or compelling, ending entirely in the Red.

“False Positive” premiered in the Spotlight Narrative section of the 2021 Tribeca Film Festival. Hulu is releasing the film on its streaming platform on Thursday, June 25.

Register: Stay up to date with the latest movie and TV news! Sign up for our email newsletters here.