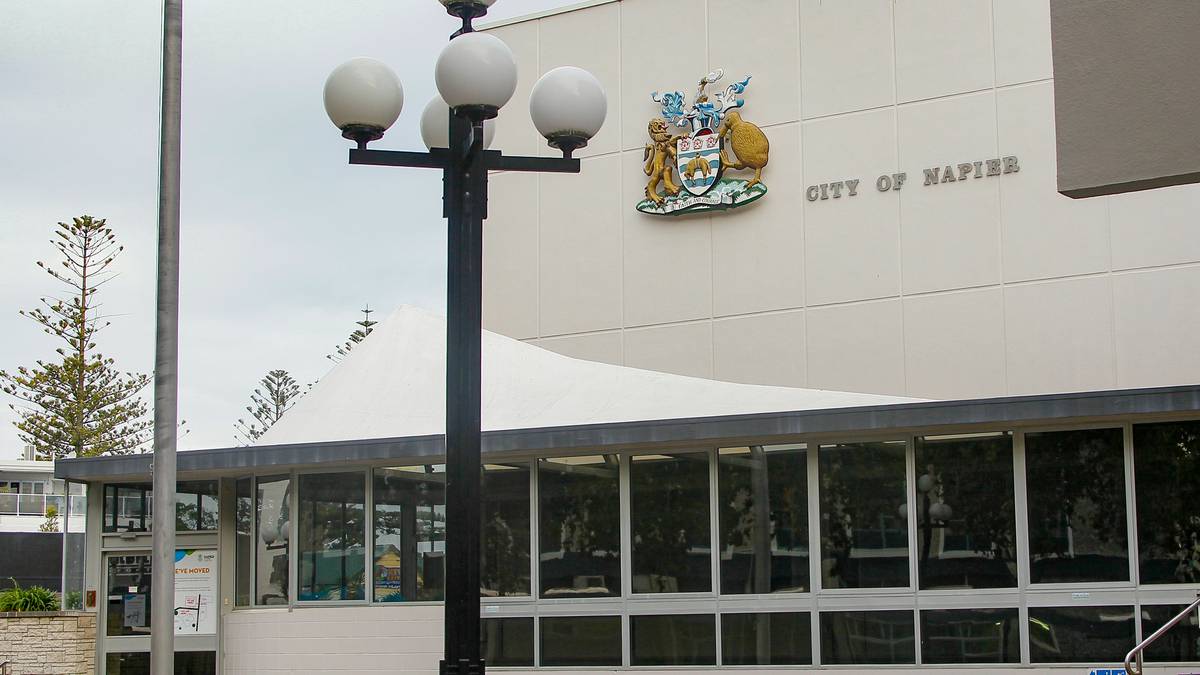 The Napier City Council civic building, not quite 55, has been vacant since December 2017, and is finally heading for demolition this year. Photo/NZME

The Napier City Council civic building, which has been closed for more than four years due to earthquake threat, will be gone forever by the end of the year.

Thanks to a new focus on earthquake risk, he retired abruptly in December 2017, and the first active steps on the site came into a new era Thursday when demolition experts from as far afield as Auckland visited and visited with council staff on Thursday, before bidding closed in two weeks – on May 13 .

Companies are required to price the demolition, removal and site leveling of the Hastings St building, including recycling and material handling in accordance with New Zealand Green Building Council standards.

Council Civic Precinct Steering Group Chair and Deputy Mayor Annette Brosnan, who confirms she is seeking re-election to the council this year for a fourth and final term, said it was a “milestone” to see approval of the demolition resource submitted last month, and she expects the bidding to be swift with Starting on site in July.

It is hoped that the demolition will take 3-6 months, and the site will be furnished as city space for the expected 18 months before construction of the first phase begins in 2024, including a new library and public council space: “Where do you pay your prices.”

Ivan Jokic, owner of Hawke’s Bay Demolition 1, confirmed to bid, having been involved in major demolition of Napier over the past decade, including Napier Hospital, and other buildings on Hastings Street including the Odeon Theater and the former business hotel, and the late 1980s .

He said the demolition of the civilian building appears obvious. While there are “asbestos issues”, which can sometimes prolong the work, it is expected that it will be possible to do work in less than six months.

Both the three-story building, which opened in 1967, during Sir Peter Tate’s 18-year mayoralty, and the adjacent public library in December 2017, after a seismic assessment showed the buildings were vulnerable to earthquakes.

The civic building came in at just 10 percent of the national building standards, and the library at 15 percent, in the “very high” risk category to life in a major earthquake — 25 times greater compared to a new building.

The assessment was conducted during a national focus on seismic risk after the 2010 and 2011 Christchurch earthquake, and the 2016 Kaikoura earthquake.

Since then, Napier Council management and planning and other office staff have been located in at least three locations, including the headquarters and Mayoral Chambers of the Cape View House, on the corner of Marine Parade and Vautier St, on the top floor of the old post office building at The corner of Hastings Streets and Dickens Streets, and a public service center on the ground floor of the Donvegan House, across from St. Station from the vacated civic building.

The meetings of the Council and its committees have since been held mainly at the facilities of the nearby Hawke’s Bay Regional Council or at the War Memorial Center at Naval Parade.

The council has committed $55 million to redevelop an urban area still in the design stages, with Boffa Miskell, Athfield Architects and Hawke’s Bay Architects Jacob Scott.

But it’s not alone, with buildings like Wellington Central Library, Masterton City Hall, the Southland Museum, and many other public facilities closed across New Zealand, some to be refurbished, and some to be demolished.

In a report last year, an independent research organization called it a “rapid shutdown of a number of council buildings across the country” and called into question some of the decision-making processes.

The introduction of the Buildings Amendment (Buildings Vulnerable to Earthquakes) Act in 2016 (the 2016 Act) reinforced risk perceptions through legal requirements for certain buildings to conduct seismic assessments.

This has led to a focus on the percentage of standard ratings for new buildings, with buildings rated less than 34 percent often defined by regional local authorities as earthquake-prone, with specific time frames for remediation.

The report says that a “common misconception in some sectors is that if a building is rated below 34 percent NBS and/or declared earthquake-prone, the building is dangerous and should be closed down immediately.”

“This is often reinforced by the belief among regional authorities that the Health and Safety at Work Act 2015 (HSWA) creates significant legal exposure for senior officials responsible for council buildings that have been deemed earthquake prone,” she says.

“War is good business”: how U.S. gunmen win in Ukraine

CNN goes to the front-line city, where Ukrainians are left in the midst of constant bombing