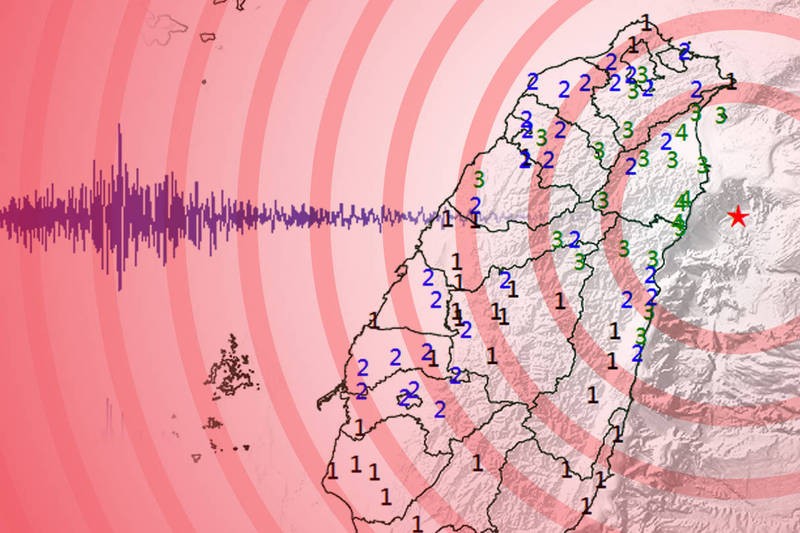 TAIBI (Taiwan News) – In the wake of two powerful 5.0 magnitude earthquakes on Tuesday morning (Feb.9), a seismologist with the Central Weather Bureau (CWB) said they could be a precursor to a much larger earthquake of magnitude 8.5.

The Liberty Times quoted Chen Kuo-chang (), director of the CWB Seismology Center, as saying that Taiwan has already seen eight earthquakes above 5.0 on the Richter scale this year, and he said that most of these earthquakes occurred in a subduction zone near the Hope Basin.

Chen said there had been a spike in earthquakes in this area last year as well. There are two explanations for this, he said: First, frequent repetition is very good because the energy is being released continuously, preventing a major earthquake. Second, in the past, large earthquakes have occurred near a subduction zone or trench, and earthquakes of magnitude 8.5 or greater have historically had many shocks.

He noted that Tuesday’s 5.7-magnitude earthquake is the eighth on a scale of 5.0 or higher this year. He said that the two accidents that struck that morning were caused by the subduction zone itself and are currently considered aftershocks of a 6.1-magnitude earthquake off the northeast coast of Taiwan on February 7.

Referring to earthquakes in recent history, Chen said the 2011 Tohoku earthquake, which scored 9.0 on the Richter scale, was preceded by a 7.7-magnitude earthquake seven days ago. At the time, experts thought it was the initial earthquake, only to witness an even more terrifying and catastrophic earthquake a week later.

Therefore, Chen advised seismologists to closely monitor sudden earthquakes in the same area. He said that in the event of these recent earthquakes off the northeast coast of Yilan, the CWB would continue to monitor the situation closely.

He apologized for not sending the alert this time and pledged that notifications would be more accurate in the future. Chen said that there are many organizations involved in changing the mobile phone broadcasting, which should follow the procedures and approval of the Central Council for Disaster Prevention and Response, and he estimated that the new messaging system will be operational by the second half of the year. .