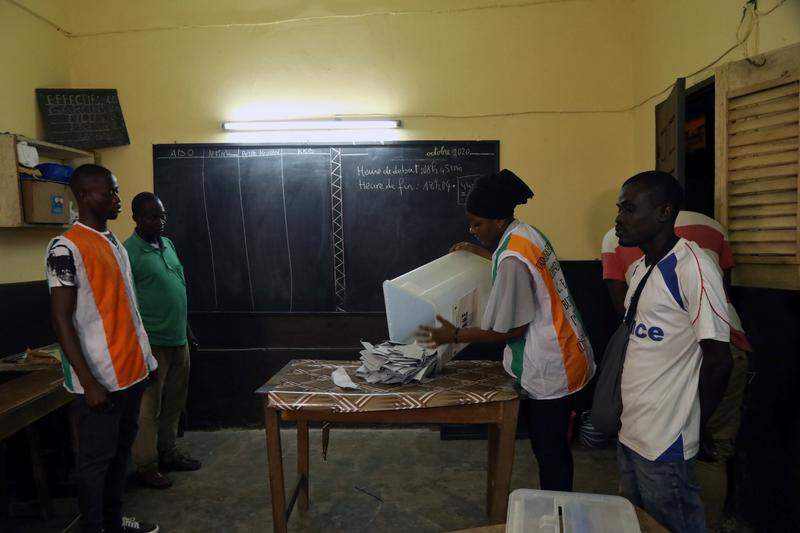 ABIDJAN (Reuters) – Ivory Coast appears to have avoided large-scale violence on Saturday in a presidential election boycotted by the opposition, despite conflicting reports of riots in the provinces.

The streets of the larger city of Abidjan were quiet and voting seems to have gone smoothly in most districts. Opponents accuse President Alassane Ouattara of violating the constitution by seeking a third term and had had concerns that the vote could turn violent after more than 30 people were killed in the pre-election unrest.

The opposition said entire parts of the country had not taken part in the vote or were prevented from doing so. Candidate Pascal Affi NGuessan said the opposition estimated that about 12 people had died as a result of civil disobedience campaigns.

A government source said two people had been killed and more injured in clashes outside Abidjan. Ruling party representative Adama Bictogo reported deaths but gave no figures. Police did not provide any updates.

But Ouattara minimized the scale of any violence or disruption.

Except for a few isolated places – a dozen or so – voting is going well, he told reporters as he voted in Abidjan.

Djenebou Toure, a businesswoman sitting with friends outside a polling station in the Abijans Adjame district, said: “She was scared but she did not stop us from going out.

The election commission said that out of over 22,300 polling stations, 30-40 were vandalized.

Opponents of 78-year-old Ouattara say he is breaking the law by running again because the constitution limits presidents to two terms and is jeopardizing hard-earned economic gains.

Ivorians refused to join this election farce, said Affi, who called for a boycott along with the other candidate, former President Henry Conan Bedie.

Ouattara says he can run again under a new constitution adopted in 2016 and does so only because his hand-elected successor died suddenly in July. With his opponents telling their supporters not to vote, his victory is probably a premeditated ending.

Voting closed as planned, and counting began shortly after 6 p.m. (1800 GMT), according to Reuters reporters in Abidjan.

Election-related violence has brought back memories of the 2010 presidential vote, which sparked a brief civil war that killed 3,000 people after Ouattara’s predecessor Laurent Gbagbo refused to leave.

Opponents call Ouattaras’s candidacy a new blow to West African democracy following a military coup in Mali in August and a successful bid for a third term this month by Guinea’s Alpha Conde, also discussed by his opponents. .

Gordon Monson: Utah football is about to gain status that few teams do