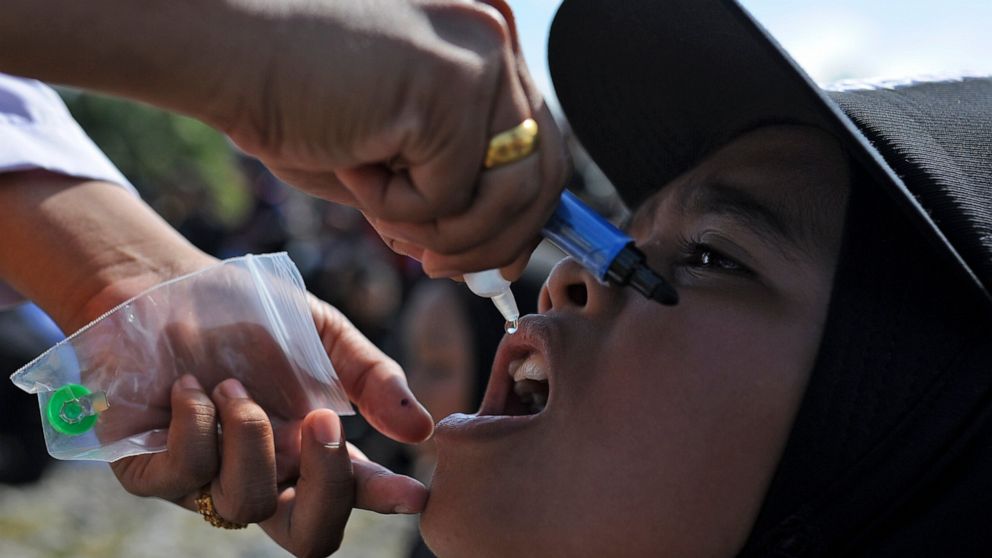 PIDIE, Indonesia — Children and toddlers in school uniforms line up with their parents for polio vaccinations in a square in the town of Sigli on the northern tip of Indonesia’s Sumatra island on Monday. ten years ago.

The virus was first detected in October in a 7-year-old boy suffering from partial paralysis in Aceh province near Sigli, and three other cases have since been detected, prompting mass vaccination and information campaigns. I’m here.

Polio immunization rates in this conservative state lag far behind other states in the country, government officials said, especially because of widespread misinformation that the vaccine is incompatible with religious beliefs. is impeded. The government has also prioritized vaccination against COVID-19 since it became available.

The campaign, which started on Monday, aims to vaccinate about 1.2 million children in the state, said Maxi Laine Rondonou, director of disease control and prevention at the Ministry of Health.

“There is no cure for polio. The only cure is prevention and the tool for prevention is vaccination,” said Rondonou, adding that the child is still able to walk, although he has a limp.

With a population of approximately 275 million, Indonesia is the fourth most populous and largest Muslim-majority country in the world.

Aceh is particularly conservative and is the only province in Indonesia allowed to practice Sharia, a concession made by the central government in 2006 to end the war with the separatists.

False rumors that the polio vaccine contains pork and alcohol, which are prohibited by Muslim faith, have spread, especially in rural areas, complicating vaccination efforts, many Indonesians said. Hanif, head of the Aceh Department of Health, which also goes by one name, said.

“We cannot work alone. We need support from all stakeholders, including religious leaders, to make people understand the importance of vaccination,” Hanif said.

Azhar, the father of a seven-year-old boy who contracted polio, said other villagers he lived in chose not to vaccinate his son. vaccination May cause harmful chemicals or non-halal substances.

“The neighbors told me that my son doesn’t need to be vaccinated and that they don’t want him to get sick because of harmful chemicals that are against Islam,” said a 45-year-old. said the man.

Dewi Safitri, a mother of three who was vaccinated on Monday, just didn’t know it was necessary.

she later said she was sure health The employee explained that if her child doesn’t get vaccinated, she risks paralysis and death.

“I didn’t even know about vaccination,” she said.

According to the World Health Organization, the World Health Assembly adopted a resolution to eradicate polio globally in 1988, and since then wild poliovirus cases have decreased by more than 99%.

It was eradicated in Indonesia in 2014 and is still endemic in only two countries, Afghanistan and Pakistan.

According to WHO, polio mainly affects children under the age of five. However, people of any age who have not been vaccinated can contract the disease, and sporadic cases continue to occur.

In New York, for example, in September, the state stepped up its polio eradication efforts after polio was detected in wastewater around New York City.

After the first polio case in the United States was confirmed in July in Rockland County, north of the city, officials began checking there for signs of the virus.

While the statewide polio coverage is 79%, Rockland’s rate is lower, and New York health officials are urging all unvaccinated residents, including children up to two months old, to immediately I urge you to get vaccinated.

Of the three other Indonesian children in the same village as the first confirmed case, none had received basic vaccinations, Rondonou said.

“Indonesia has been declared eradicated, so it should be reported as an outbreak, but it turns out that wild poliovirus is still present,” he said.

Rondonuwu said his ministry is closely monitoring cases by conducting door-to-door testing to ensure there are no additional unreported infections.

According to WHO, poliovirus is commonly transmitted from person to person via the “fecal-oral” route. In Indonesia, authorities also point to unsanitary conditions as a possible source of new infections after discovering that some locals defecate directly into a river where children are often seen playing.

In Indonesia, polio immunization coverage has declined since the COVID-19 outbreak. Currently, 73.4% of Indonesians are fully vaccinated against her COVID-19, despite the challenges of reaching the people of the archipelago nation, which consists of five major islands and thousands of smaller islands. 87.5% have received at least one of his vaccinations.

For polio, 86.8% of babies nationwide were vaccinated in the first year of 2020, down to 80.7% in 2021. This is because the country has been forced to focus most of its health facilities and workers on dealing with the pandemic.

According to UNICEF, the nationwide decline was part of a wider decline in basic immunizations such as measles and rubella.

Dicky Budiman, an Indonesian epidemiologist at Australia’s Griffith University, said the polio discovery in Aceh had to be taken seriously, saying “the threat is real for Indonesia”, citing Basic Prevention. He said vaccination coverage is still low, putting the country at high risk. category.

“This is something the government really has to pursue, because otherwise it is dangerous,” Budiman said.

“We must act now by stepping up basic immunizations, or we could end up with more health hazards in Indonesia.”