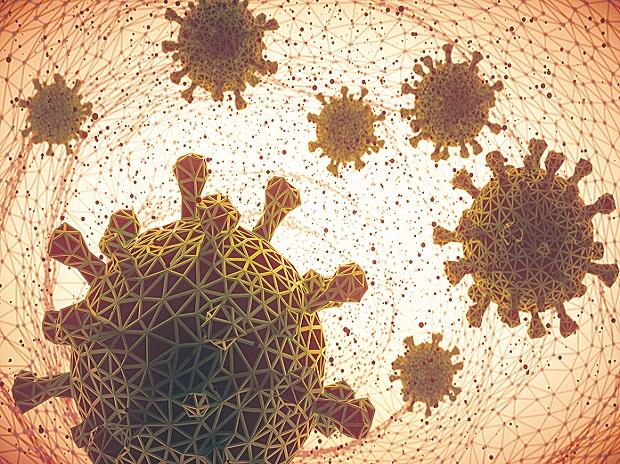 Exposure to a single nasal droplet may be sufficient to cause COVID-19 infection, according to a landmark trial in the UK in which healthy volunteers were intentionally given a dose of the SARS-CoV-2 virus.

The collaborative study is the first in the world to perform detailed monitoring over the full course of COVID-19, from the moment a person first encounters SARS-CoV-2, throughout the infection to the point at which the virus is apparently eliminated.


Among several key clinical insights, researchers found that symptoms start to develop very fast, on average about two days after contact with the virus.

They also found that infection first appears in the throat, infectious virus peaks about five days into infection and, at that stage, is significantly more abundant in the nose than the throat.

The team also found that lateral flow tests (LFTs) are a reassuringly reliable indicator of whether infectious virus is present –whether they are a likely to be able to transmit virus to other people.

The findings, published on Nature’s pre-print server and which have not yet been peer-reviewed, detail the outcomes in 36 healthy, young participants with no immunity to the virus.

The study, which took place at the Royal Free Hospital in London, shows that infection of volunteers is reproducible and resulted in no severe symptoms in healthy young adult participants.

Participants were exposed to the lowest possible dose of virus found to cause infection, roughly equivalent to the amount found in a single droplet of nasal fluid when they were at their most infectious.

The research lays the groundwork for future studies to test new vaccines and medicines against COVID-19.

First and foremost, there were no severe symptoms or clinical concerns in our challenge infection model of healthy young adult participants, said Christopher Chiu, professor at Imperial College London and Chief Investigator on the trial.

“People in this age group are believed to be major drivers of the pandemic and these studies, which are representative of mild infection, allow detailed investigation of the factors responsible for infection and pandemic spread,” Chiu said.

In the trial, 36 healthy male and female volunteers aged 18-30 years, unvaccinated against COVID-19 and with no prior infection with SARS-CoV-2 were given a low dose of the virus –introduced via drops up the nose.

They were carefully monitored by clinical staff in a controlled environment over a two-week period.

The study used virus from very early in the pandemic obtained from a hospitalized patient, prior to the emergence of the Alpha variant.

Half of the volunteers became infected, 16 of whom went on to develop mild-to-moderate cold-like symptoms, including a stuffy or runny nose, sneezing, and a sore throat.

Some experienced headaches, muscle aches, tiredness and fever, while none developed serious symptoms.

There were no changes seen in their lungs, or any serious adverse events in any participant.

All participants will be followed up for 12 months after leaving the clinical facility to monitor for any potential long-term effects.

Among the 18 infected participants, the average time from first exposure to the virus to viral detection and early symptoms was 42 hours, significantly shorter than existing estimates, which put the average incubation period at 5-6 days, researchers said.

Following this period there was a steep rise in the amount of virus found in swabs taken from participants’ nose or throat, they said.

These levels peaked at around five days into infection on average, but high levels of infectious virus were still picked up in lab tests up to nine days after inoculation on average, and up to a maximum of 12 days for some, supporting the isolation periods advocated in most guidelines.

There were also differences in where the most virus was found. While the virus was detected first in the throat, significantly earlier than in the nose, levels were lower and peaked sooner in the throat, according to the researchers.

Peak levels of virus were significantly higher in the nose than in the throat, indicating a potentially greater risk of virus being shed from the nose than the mouth.

This highlights the importance of proper face mask use to cover both the mouth and nose, they added.

(Only the headline and picture of this report may have been reworked by the Business Standard staff; the rest of the content is auto-generated from a syndicated feed.)